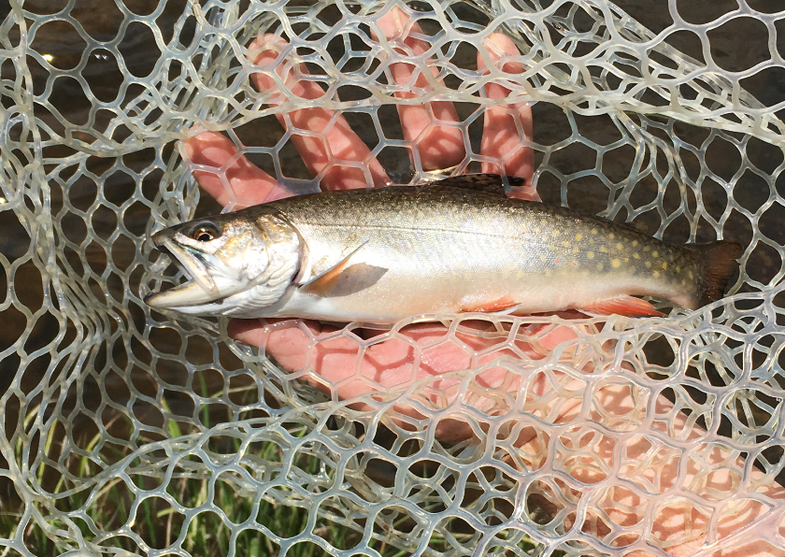 As soon as the Adams fly settles on the water, it disappears beneath the surface. The eat, subtle and quick, catches me off guard. I raise my rod, and the line goes tight. The trout tears toward the far bank, and then carves downstream, shimmering above the smooth stones of the stream bed. I’m after a big high-desert rainbow, and this fish is hugging the bottom as if it has some heft. But as I play it to the net I can see that it’s no trophy.

Before I can release the fish, my wife, Caroline, hooks a fighter 30 yards downstream and back-steps from the bank, easing it in. The commotion has little effect on the rest of the fish; one rise ring after the next spreads across the river, as sunlight pours into the canyon. At places along this stretch of the Rio Brazos, in far northern New Mexico, the river is no more than four or five feet across, and this pool isn’t much wider. But I’ve never seen so many trout rising in such a small piece of water.

Neither Caroline nor I have visited New Mexico before, much less fished its mountain streams. With little idea of what to expect, we arrived in Albuquerque the morning before, blinking in the hot June sun, and drove north into the mountains, watching the red desert give way to aspen and spruce. We’d planned the trip to celebrate having made it through our first year of marriage, which hadn’t exactly gone smoothly.

The lodge caretaker had insisted that he meet us at a pull-off an hour from the property, so we could follow him the rest of the way. I balked at first, sure that we could manage, but as we trailed him for 30 miles down a dirt road, into the 1½-million-acre Carson National Forest, I realized that he was right—all this land would have swallowed us. By dusk we’d arrived at the Brazos River Lodge, an idyllic old ranch turned hunting and fishing camp, settled before the establishment of the national forest that surrounds it. Caroline and I had resolved our differences, mostly, but my hope was that a few days in this wilderness would solidify that we were on the same team again.

After plucking a dozen trout from the hole, Caroline and I follow the river through wide grassy meadows, bordered by cliffs and steep slopes of the canyon. This part of the West is utterly foreign to me, with its sheer rock faces and arid, rolling plains. Though the Brazos and its sister streams along the Colorado border—the Rio Chama, the Rio Grande, the Vallecitos River—don’t command the same recognition as many Western hotspots, it doesn’t take long to realize that, in this often overlooked part of the region, the fishing is no less spectacular. What the fish lack in heft they make up for with spunk and rich coloring; I was assured, though, that these waters hold their share of overfed rainbows, too.

We soon come to another pool, and, as we approach, I can see a trout holding along the near bank. We have only two days to fish the Brazos, and I don’t want to waste a single cast. I shoot my fly into the current and watch it glide downstream. As the fish takes, I jerk up the fly, trying to set the hook. But I’m too eager. My line flails through the air. I assume that I’ve spooked the trout, but it rises again a moment later. I get control of my line, make a couple false casts, and launch the Adams fly again. It touches down; the trout breaks above the water. I snatch the fly back—and my rod bows. The fish sputters into the air, and I hustle to reel it in, fearing it might throw the barbless hook. It battles all the way to the net, fighting harder than its 16 inches warrant.

Meanwhile, Caroline wanders downriver, and, after a few minutes of casting, hooks into, what I can tell from the bend in her rod, is a solid trout. I walk down and watch as she lands and unhooks it. “You’re catching more fish,” she says, letting the rainbow slide from her hands. “But I’m catching all the big guys.”

She’s trying to fluster me, and succeeds. It doesn’t help that—though I have more knowledge of and experience flyfishing—she’s a naturally better angler than I am. She just has a touch. “You might just be a bad fisherman,” she once told me, only half kidding. “That doesn’t make you less of a fisherman. Just a bad one.”

I don’t have long to try to show her up, though, for rain clouds that have lingered in the distance all morning suddenly move over the canyon, sending us scrambling for the truck. The downpour doesn’t let up until almost dusk. We spend the last hour of sunlight pulling little brookies from a pond near the cabin, which only makes me want to get back on the river that much more.

Ace in the Hole

The next morning we start at the same pool as we did the day before. As the temperature rises, we catch one trout after the next on dry flies. Across the canyon, maybe 1,200 yards away, an elk herd grazes among the cliffs. A pronghorn lingers on a bluff nearby. I soon realize that if there’s a truly big trout in this spot, one of us would have caught it by now, so we decide to work downriver to cover as much unfished water as we can.

Over the next couple hours, rain clouds collect in the distance, obscuring the sun. The trout stop rising, so we switch to nymphs. I’m nervous about a repeat of the previous afternoon, about being pushed off the water. We don’t spend long at a pool if bites don’t come quick, and I soon abandon hope of catching a heavyweight rainbow. With a wall of clouds moving in, I want to catch as many fish as I can before the rain floods the river and ends our time on the Brazos.

Another hour passes, and now, a mile from the truck, we know we have to get back or we’ll get caught out in the storm. We zip in our lines, and we make it within a hundred yards of the truck when it starts to downpour. We dry off inside the truck and eat the sandwiches we’ve saved, watching the rain drum against the windshield. The day is over. We’ve caught dozens of fish, no doubt, but I can’t help but feel irked that the trip has ended this way. What a lame reason to cut short a trip—rain. With no end to the storm in sight, Caroline and I consider heading back to camp, but, in the end, we decide to wait it out. We’ve come thousands of miles to fish the Brazos, and, frankly, we have nothing better to do than to watch the sky and hope it clears.

Despite the storm, this is the most fun we’ve had together as newlyweds. Our first year of marriage was tough. I’d urged us to move 1,000 miles from home just a month after our wedding. We were alone in a new city, a vacuum to find fault with each other. But here, on the Brazos, there’s little to do but fish and to talk about fishing. And that we can handle.

With less than an hour left of daylight, as we’re about to head back to camp, the rain suddenly lets up. We race back to the river, splashing through the flooded meadows. We stop at a long, narrow pool in the shadow of a big rock formation that we skipped earlier in the day; it’s the only hole we’ll have time to fish before sundown.

We tie on nymphs and drift them along the far bank. Within 10 minutes I catch three rainbows at the rear of the pool. As I release the last of them, Caroline, who’s had no luck, edges me out of the way—stealing the spot. She drifts her rig through the run. Nothing. But on her second try, her strike indicator suddenly sinks. Panic fills her face. This is a serious fish, and she knows it. The trout charges to the top of the pool, and Caroline struggles to chase after it, in order to keep it from breaking off. The fish darts between the near and far banks, nearly hanging the line in the grass. I stay a step behind, trying to encourage her but mostly just getting in the way.

After a couple minutes, the trout slows and seems as though it might give up. But when Caroline gets it close, it tears away, unzipping much of the line she managed to work in. She chases after it again, and another two minutes pass before the trout surrenders for good. As Caroline coaxes it toward the net, I get my first good look. The fish is a football emerging from the water. At 6¼ pounds, it’s a trophy anywhere, but especially for this mountain stream. Beaming, Caroline holds it up for a photo, and I swear I’ve never seen a fatter trout.

She releases the fish, and it disappears into the current. We try the pool for another 20 minutes, and I manage to land a 5-pounder, a huge fish, but nothing to rival Caroline’s. When it becomes too dark to see, we walk back to the truck, flipping through photos of the fish on my phone. I’m still reeling from her having stolen the monster. I want to give her a hard time about it, I really do. But she hasn’t stopped smiling since she landed the fish, and we have a truce now.

We approach the truck. These couple days in the backcountry have got us back in rhythm, but I know that they haven’t changed who we are. Tomorrow morning we’ll leave as basically the same people. We’ll fight again, like any couple—it’s inevitable. We’ll bicker about family and money and work. She’ll get homesick, and I’ll not always be there for her. But, in time, we’ll get better at being together. And one thing is for sure: Tonight we will not fight about this fish. Tonight we will celebrate.