These four presentations are deadly on muskies, smallmouth, trout, and crappies 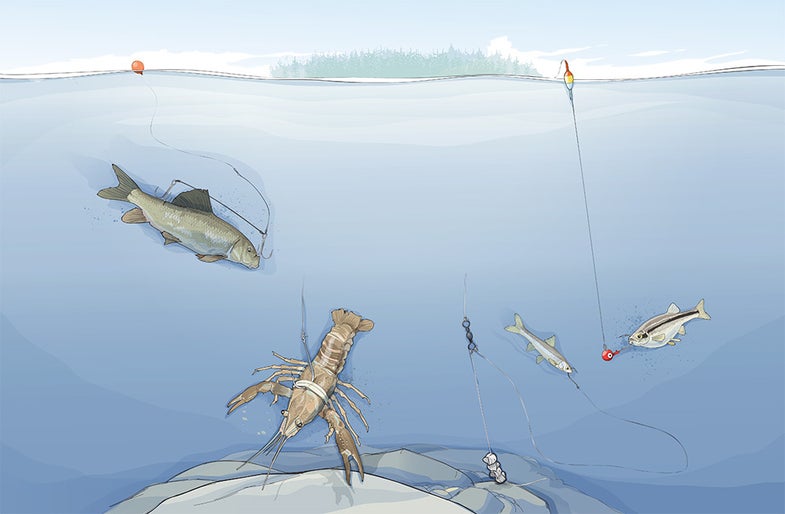 During this transitional time of year, it’s not uncommon for one day of lights-out action to be followed by a total skunking. Even traditional methods of predicting fish behavior like tracking fronts, weather, and pressure changes don’t always help you get on the bite now. There is no question that every species of fish needs to pack on weight for the long winter. Despite this fact, species like muskies, smallmouths, trout, and crappies can be reluctant to hit artificial lures as the waters cool in autumn. The solution? Ditch the plastic and go all in with live bait. These four presentations will get mouths open when every hard bait produces nothing but hard luck.

Big muskies need lots of calories with winter approaching because as soon as the ice comes off, the spawn turns on. Even anglers who usually throw artificials find it hard to leave the dock come fall without a few live suckers. Proper rigging of these baits, which measure anywhere from 10 to 18 inches, is crucial. A quick-strike, double-hook-and-wire rig looks natural and won’t gut-hook a muskie. After pinning one point of the rear treble in the bait’s back and one point of the front treble through the nose, use a partially inflated balloon to suspend the sucker just above the remaining weeds. Allow it to swim freely over the tops and wait for the kill.

Fall smallmouths are notoriously picky, so presenting crayfish as naturally as possible is critical now. You want a weightless presentation that allows the bait to move freely. To achieve this, slide a 1-inch rubber band over the tail and legs of a crayfish, so the band closes in front of the legs and behind the head. Next, take a 2/0 bait hook and thread the point under the rubber band, positioning it so the bait hangs horizontally. In moving water, cast upstream and let the bait drift back. On a lake, let the crayfish settle naturally over submerged structure and watch for hits during the descent. Use a big, meaty craw for the heftiest bass.

Come fall, big browns have a tough time passing up a live minnow; still, the key to success often lies in keeping the minnow right in a trophy’s face. Whether you’re wading in a river or fishing a lake from a johnboat, attach the main line to one eye of a small barrel swivel. On the other eye, tie about 6 inches of 6-pound monofilament and crimp as many split shot onto this tag as needed to hold bottom. To the same eye, tie 12 inches of 6-pound fluorocarbon leader and a No. 6 octopus hook. Pin the minnow through the lips so it stays lively and maintain a tight line as the rig tumbles through an eddy or ticks over a deep rockpile.

Crappies might school up and suspend in fall, but they can also be super selective now, often rejecting any jig that’s not the perfect size, shape, and color. What a fall crappie will never snub is a fathead minnow, so make sure you bring plenty. Once you’ve located a school of fish, note the depth at which they’re holding. Start rigging by adding a float stop to your main line as far up as the fishes’ holding depth. After threading on a slip float, tie a small jighead to the end of your line. Hook a fathead through the lips and you’ve got the perfect combination of flash and wiggle. This method works best with 6-pound-test line or lighter.