The Best Magnum Rimfire Rifles and Ammo for Squirrel Hunting

With better bullets and more accurate rifles, the .17 HMR and .22 WMR should get your attention if you’re shopping for a squirrel gun 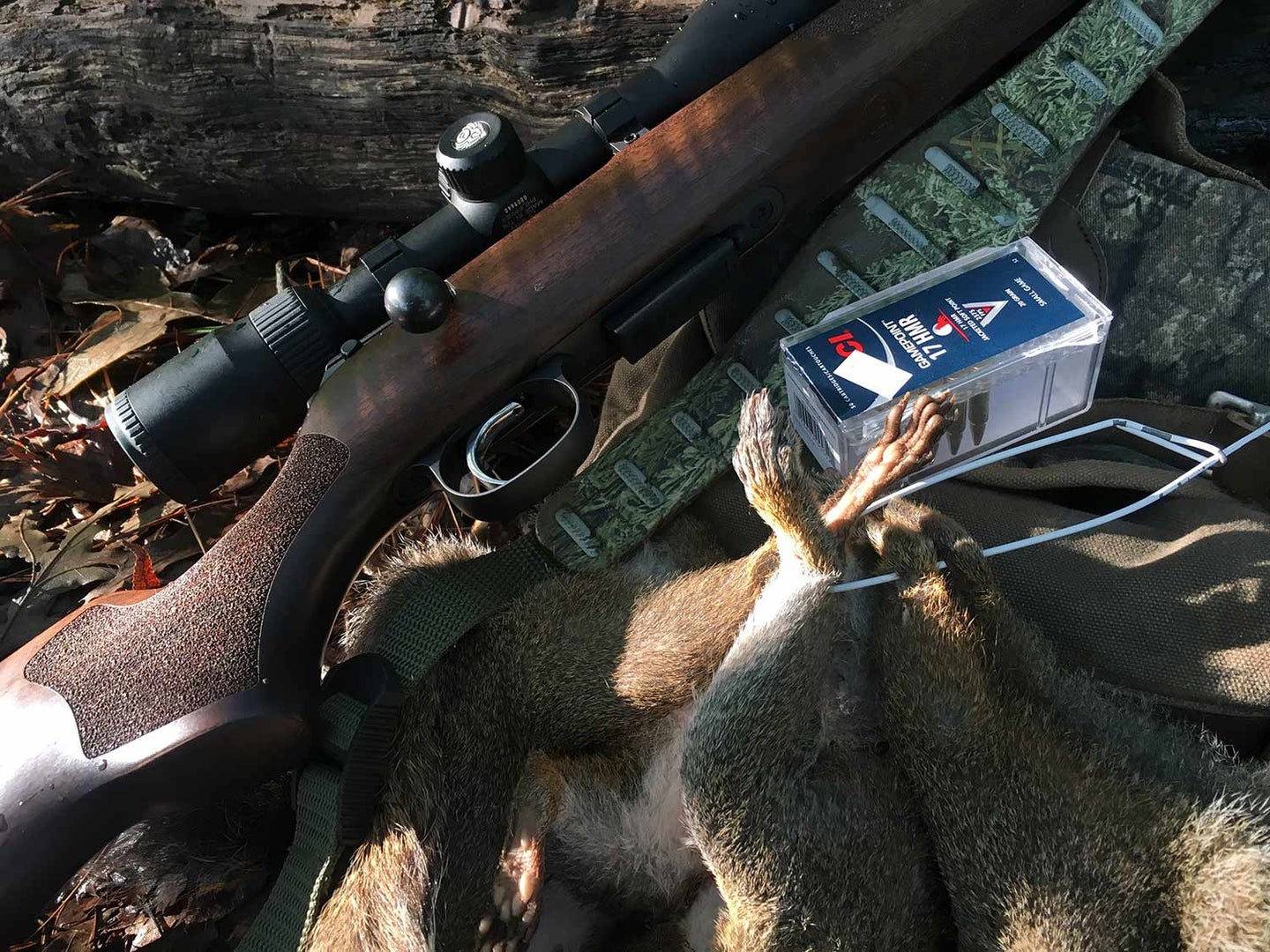 We’d been caught. My son, Anse, 5 years old at the time, and I had heard hickory nut cuttings raining from the canopy on the next ridge, and we were trying to hustle into range. But moving quietly across dry leaves with a hyperactive little boy in tow is tough.

We had to cross a four-wheeler path that momentarily put us in the open, and that was when the barking started. I slowly sat down and stared through the late-August foliage. I caught a glimpse of the flashing tail. Dialing up my scope’s magnification, I could see the squirrel’s black eye and ears—and that was enough to shoot at. We were 80 yards away, give or take. I rested the heavy fore end of the .17 across my knee, and told Anse to cover his ears. At the report, the squirrel slumped on the trunk for a second, and then fell to the ground—a sure sign of a perfect headshot.

“Daddy, you blistered that one!” he said.

That’s right, Son… And maybe we could’ve killed another one, had we sat tight, but Anse was already burning a trail through the woods to retrieve it.

That shot would’ve been a problem with the squirrel gun I’ve mostly carried for the past 24 seasons. It’s a Marlin 880 SS .22 LR with a fixed 4-power Tasco scope. It’s a simple setup, and though I could not tell you how many thousands of squirrels I’ve killed with it, an 80-yard headshot is beyond its capability. Or at least, beyond my capability with it.

The CZ 457 Varmint in .17 HMR and 10X scope that I was shooting, on the other hand, did the job it just fine. It’s a fancier, more expensive gun that fires a fancier, more expensive cartridge—but that shot made my boy look at me like a hero, and that’s worth a hell of a lot. And if I’m being honest, I’ve enjoyed hunting with the setup so much that I’ve been in the squirrel woods more often the past few years.

That is also worth a hell of a lot.

Why Choose a Magnum Rimfire Cartridge for Hunting Squirrels

As popular cartridges go, Hornady made waves when they introduced the .17 HMR in 2002. It’s flat shooting, with a reputation for outstanding accuracy. Varmint shooters loved it from the get-go, but squirrel hunters mostly steered clear because the standard load—a 17-grain ballistic tip at nearly 2,600 fps—pulverizes too much meat.

The .22 WMR has some of the same destructive issues (I’d argue that a 40-grain hollowpoint from the magnum is more vicious than the .17 ballistic tip). But it’s historically had a reputation for inaccuracy, too, and that’s an even bigger problem. Even if that reputation has been overblown (I’d say it has, a little), squirrel hunters won’t abide even a rumor of it. That and economy—squirrel hunting loses a lot of appeal when it gets expensive—is why the .22 LR hollowpoint has long held its standing as the king of squirrel loads.

But rimfire rifles—including affordable ones in magnum calibers—have gotten much better in the past decade. There are now numerous sub-$600 guns with free-floating barrels and adjustable triggers. As much as that, ammo has gotten better, with several game-friendly bullets available in both .17 HMR and .22 WMR.

Still, why would you want a magnum rimfire for squirrel hunting if your regular .22 is working just fine? The flat trajectory advantage is huge. To be fair, you might not need that in a Midwest woodlot. But if you’re hunting in big, mature timber, especially later in the season when squirrels are foraging on the ground, shot opportunities can be surprisingly rangy. A 100-yard poke isn’t uncommon, and 50-yard shots are about average. Only unwashed heathens aim to shoot squirrels through the body. It’s head shots only if you want to be friends with me, and when you’re talking a target of that size, a quarter inch-worth of bullet drop or rise is huge.

By comparison, a hyper-velocity Long Rifle hollowpoint that’s sighted in .3 inch high at 25 yards will be nearly an inch high at 50, and 2.5 inches low at 100. Such a lobbing arc works if you’re body-shooting squirrels—but I meant what I said about that. You could put a high-end scope with adjustable turrets on your .22 and carry a rangefinder to dope for the drop—but if you do that, you’re inflating your small-game budget again. And besides, who wants to mess with all that gear? Squirrel hunting is supposed to be simple.

You need to choose your bullets carefully if you’re hunting with a magnum rimfire because every great once in a while, you’ll miss the head and hit the body. So long as it’s an accident, it doesn’t make you a heathen. But you don’t want to render the entire critter inedible. That’d be a tragedy. My favorite bullet—in both calibers—is the CCI Gamepoint, which is a 20-grain pointed soft point in the .17, and a 40-grain PSP in .22 mag. Hornady makes a similar .17 20-grain soft point in the HP Varmint. CCI also makes a 20-grain Full Metal Jacket .17 HMR, which I haven’t tried, and Winchester makes a 40-grain FMJ in .22 WMR, which I have. It’s a fine squirrel load, if you can find it and your gun shoots it.

The point is, opt for heavier bullets designed for controlled or no expansion, and avoid the lighter, hyper-velocity hollowpoints and ballistic tips. There are several loads out there with even heavier bullets (45 to 50 grains) for the .22 WMR, but velocities with most of those are slowed enough that you begin to lose the round’s trajectory advantage over a Long Rifle. Stick to the 40-grainers at 1,900 fps or faster.

To be clear, even with the right bullets, both calibers are still more vicious than the average Long Rifle hollowpoint on meat. I’ll again stress that you should strive for clean head shots. But a bad angle that clips a shoulder probably won’t ruin the squirrel. With the 20-grain Gamepoint out of my .17, the entry wound is tiny, and the exit wound is about the size of a nickel. Head shots are more dramatic because there’s more bone to hit. Squirrel-brain eaters need to stick with their .410s, but for the rest of us, modern rifles and ammo have helped squirrel gear take a big leap forward.

When I was 14 years old, I upgraded the open sights on my .22 to a 4X scope. That gave me quite an advantage—but nothing like this setup, which has become my go-to squirrel rifle. It’s topped with a Leupold VX-3HD 3.5-10×40 CDS-ZL scope. Anse calls it my “Big Blister Gun.”

My buddy Ryan and I have been squirrel hunting together since college. Regardless of what he’s after, Ryan is one of those guys who always, well, kills stuff. His pet Ruger American .22 Mag wears a 3-9×40 scope, and I’ve watched him head-shoot squirrels at 100 yards with it.

This would be the magnum version of my old squirrel gun, but upgraded with a heavier barrel and adjustable trigger. Marlin’s bolt-action rimfires have Micro-Groove rifling and have always been excellent shooters, in my experience. Their single-stack aluminum magazines are dead-nuts reliable, too.

Read Next: Best .22 LR Ammo Choices for Hunting and Competition

I hunted with this gun for a full season a few years ago, and it is a shooter. It had an excellent adjustable trigger, and for me, produced the tightest groups of any .22 Magnum I’ve ever shot. It’s not the prettiest gun out there, but it’s tough to argue with that at the price.

F&S contributor Michael R. Shea is a rimfire nut in a way that I am not. He has spent most of his income on rifles and ammo for competition—but he’s coming right along as a head-shooting squirrel purist, too. This Tikka got his nod as the best .17 on the market for the money.

The .17 HM2, or Mach 2, was introduced a couple years after the .17 HMR, but it never caught on in the same way that the more powerful cartridge did. The Mach 2 is a .22 LR Stinger case necked down to accept a .17 bullet. It’s seen a bit of a resurgence—CCI introduced a new VNT Mach 2 load last year—and its most loyal following is among serious squirrel hunters.

It does have a flatter trajectory than the Long Rifle, making those 100-yard headshots easier, and the reduced velocity also makes it less destructive than the HMR. But ammo options are limited (only three available that I could find), and there aren’t many .17 Mach 2 rifles out there, either. The Mach 2 produces less muzzle energy than a high-velocity .22 LR hollowpoint, too, and from what I’ve seen, it wounds a lot of squirrels that aren’t shot in the head. If I were shopping, I’d opt for one of the more common calibers.