The Best Rifles for Young Hunters

The author reflects on his son's stellar hunting season 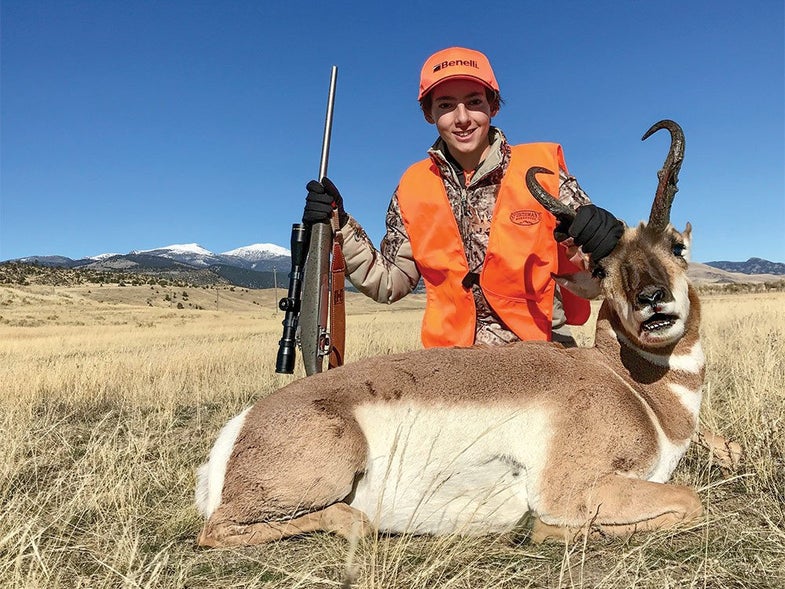 I knew Jack had been bitten by the same gun bug that got me when I was a youngster when I asked him, right before he turned 10, what kind of rifle he wanted for his first big-game season. “A .257 Roberts,” he said without a moment’s hesitation.

I’d always had a soft spot for the “Bob,” but it wasn’t really a cartridge we talked about much or shot, so the seed for that request was planted by someone other than me. Not that I minded in the least. I was impressed that Jack was already forging his own path in the gun world.

That .25 caliber is a stylish little round, based on the granddaddy of our modern high-power cartridges, the 7×57 Mauser, and is great in a youth rifle, particularly when downloaded to minimize recoil. (For practice rounds, I load 100-grain Barnes TSX bullets in front of 23 grains of H4895. At 1,840 fps they are softer than a pussycat to shoot.) The .257 has more mystique than the .243, 7mm-08, and other cartridges that stick to the middle of the road. So, of course, I had one custom-built for him—you only get one first “real” gun after all. My good friend Jeff Sipe, then head honcho at Montana Rifle Co., made a left-handed bolt gun with a shortened stock that fit Jack perfectly. It became his pride and joy, and he put in a lot of time dry-firing it off pillows in our house because it was too heavy for him to hold on his own for more than a shot or two.

In the four years since then, Jack has grown like wild asparagus and has the wingspan of an adult, but he still loves shooting that little rifle.

We hunted antelope last fall on a ranch not far from our home in Montana and made a move on a group of pronghorns that was hugging the edge of a grassy field. They rounded a finger coming off a hill, heading our way. While I watched, Jack sneaked up a dry irrigation ditch to close the distance between him and the small herd. He scrambled out of the little gulch, quickly dropped into a kneeling position, and killed a nice buck at 300 yards. His gutting job wasn’t as slick as his shooting technique, but he got the task done.

If Jack had his way, he’d probably hunt with his .257 all the time. But the trade-off to being a gun writer’s son, and having what amounts to an unlimited supply of ammo to shoot, is that he’s my guinea pig for testing many new products—a ballistic Faustian bargain he’s entered into willingly.

So, during fall, I’m usually pushing a new rifle or two into his hands to try out. After our antelope hunt, Jack and I chased mule deer near Ennis, Montana. A cowboy I know down there named Jeff lets kids onto his ranch to hunt management bucks, so off we went. There was a specific old buck, well past his prime, that we were looking for. The eastern boundary of the ranch abuts the Madison Range, raw and wild mountains where solitary bull elk and grizzlies hide out, and we searched for our deer in the foothills there.

I gave Jack one of the new Mossberg Predators in 6.5 Creedmoor that I topped with an Eotech scope. That Predator is a great rifle for the money—accurate and rugged. But another selling point is its threaded barrel, to which we attached a suppressor from Silent Legion. Shooting and hunting with suppressors is the only civilized thing to do if you’re part of a group, and it is one of the elements of European gun culture that we unwashed heathens in the New World should adopt more widely.

The rut was in an early phase, and by locating does and glassing around them, we were able to spy bucks. Eventually, we found our old guy—there was no mistaking his wide, heavy 2×2 rack. The lack of points might diminish him as a trophy in some hunters’ eyes, but he’s the kind of deer I’d be happy to hunt for the rest of my days.

Our hunting party—Jack and Jeff and I—dropped below the ridge of hills we had been hiking to get out of sight of the buck and the does he was shadowing. We covered several hundred yards as quickly as we could to get beneath where we had seen him last. Then Jack and Jeff moved quietly uphill together while I stayed behind. They crept up to a stubby cedar, and when Jeff set up the short tripod he was carrying next to the bush, I knew they had the deer in sight.

The two of them moved so smoothly in concert that they looked like they’d been hunting partners for years instead of having met for the first time the day before. Jack carefully maneuvered the long barrel of the suppressed rifle around Jeff, settled the stock onto the tripod, and took his shot. He placed the bullet right behind the deer’s shoulder.

I don’t know why that stalk remains so vivid in my memory, but it drove home what a competent and seasoned hunter my son had become, despite being only 14. He started shooting when he was just a young sprout. At the range he’d ring steel at 400 yards and beyond, shot after shot, shouting “Creeeeed-moor!” after each impact from one of my heavy-barreled 6.5s, his 7-year-old brain unaware of the skills he was developing.

I got to see another display of that prowess about a week after Jack shot the 2×2. The Thanksgiving turkey and pumpkin pie had barely hit the floor of our stomachs when we jumped into the pickup and drove five hours to the southeastern corner of Montana, very close to the Wyoming border.

Jack had yet another new rifle in his hands—the Savage 110 Storm—this one in .308. With its modular “AccuFit” stock, the rifle can be easily configured for different comb heights and lengths of pull. (My pals at Savage were chagrined to learn that my gangly boy shoots a standard-size rifle just fine, so he didn’t need to tweak the gun, but I did play with the system after the hunt and confirmed that it does work as advertised.)

This was one of those hunts that went down fast, the excitement contained to a few mad seconds of action. We were hunting in Wyoming, driving across broken ground that couldn’t decide if it wanted to be prairie or badlands. As our truck crested a small hill rimmed with dry grass, sage, and prickly pear, we spooked a trio of mule deer bucks a couple hundred yards away in the distance.

The deer dropped into the coulee that separated us from them, angling to our right. We spilled out of the truck, Jack grabbing his rifle while I snatched the tripod, and the race was on. We ran toward the head of the coulee, where I figured the deer would appear. The moment I saw the lead deer come into sight, I splayed the legs of the tripod while Jack racked a round into the chamber of the .308 and got on the rest. The nicest buck was third in line, and Jack made a killing shot, followed by a quick second hit as the deer fell.

Jack has been my main hunting buddy for several years now, and I hope it stays that way forever. But seeing him grow up so fast, I know that these experiences can be as fleeting as that final hunt last year, over in the blink of an eye.

But as long as there are new rifles to play with, or he’s willing to curl his long frame around that tiny .257, we’ll have a great excuse to skip a few days of school, load the truck with sleeping bags and coolers, and go do it again.

No, the stock isn’t sized for smaller shooters, but the Predator has some excellent qualities as a youth gun. First, there isn’t a better all-around cartridge than the 6.5 Creedmoor. It is a soft-shooting round that people like to practice with, and it drops critters with authority. Second, the threaded muzzle offers the versatility of adding either a muzzle brake or a suppressor. Third, it is tougher than a longshoreman and can withstand any abuse a youngster can dish out.

This beauty from Montana Rifle Co. counts as a splurge. It’s more expensive than most first guns, yet it has an heirloom look and feel that takes the sting out of the price. It is fed by a ­controlled-​round feed action that has been hand-lapped for smoothness, has a Model 70–​type three-position safety, and can be stocked to whatever dimension you desire. It is handy and well balanced and is the kind of gun that will be passed down from one generation of hunters to the next.

This gun is meant to grow with a hunter. Each Storm ships with a bag of inserts and spacers so the rifle can be custom-fit to the shooter. The length of pull can be set from 12.75 inches to 13.75 inches, and the comb height adjusts for proper eye alignment behind the scope. The adjustable AccuTrigger and soft grip inserts molded into the stock add to the ­rifle’s solid ergonomics. The ­detachable-box magazine ­allows an adult to manage the ammo for younger ­hunters.