Thinking about swapping your slug gun for a rifle this fall? Here are four places to start 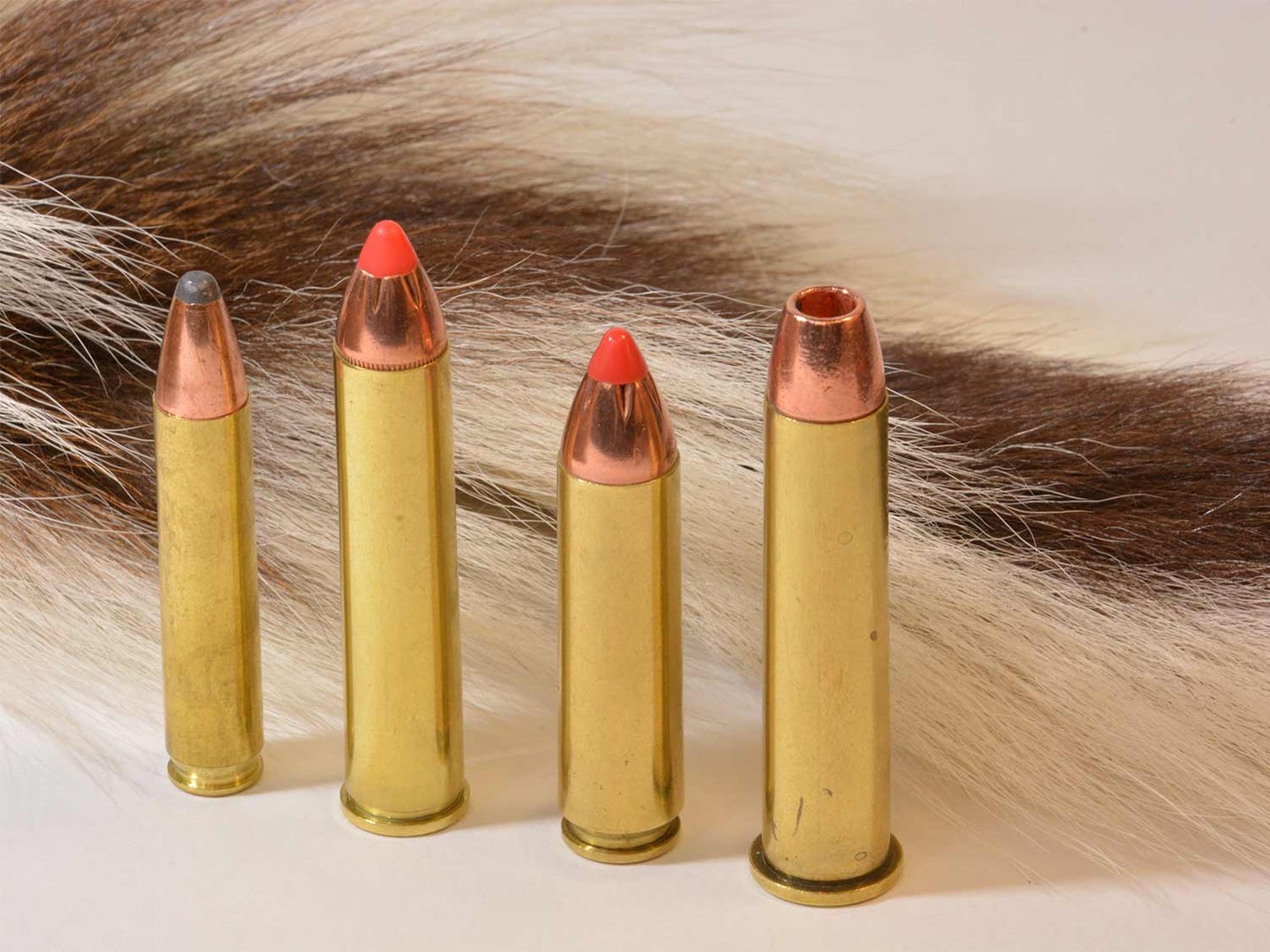 For generations, a lot of states have allowed deer hunters to use only shotguns with slugs or maybe a muzzleloader during gun season. Then somebody figured out that straight-walled rifle cartridges are just as safe as slugs. The idea took off, and now many of those states are allowing straight-walled cartridges to be used as deer hunting ammo. These cartridges shoot a bit flatter than slugs and, on average, are more accurate and not anywhere near as squirrely.

Shotgun slugs require a series of small miracles to happen for them to perform well. Anybody who has done much range work with them knows that they are plagued with fliers. You may have a perfect group going on your target only to find the next shot is off in another time zone. I’ve lost count of the groups that started under 2 inches with four shots and jumped to 5 or 6 inches on the fifth. Straight-walled rifle cartridges—at least most of them—are a lot more consistent.

While there are hundreds of rifle cartridges suitable for deer hunting, when we add that “straight-walled” factor into the equation the list grows much shorter. These four are the most popular.

Designed and developed by Winchester, the 350 Legend is the first new introduction to the market aimed specifically at straight-walled hunting regulations. The company unveiled the new round at the 2019 SHOT show and currently offers it in Deer Season XP, Power Max Bonded, and many others. Winchester has also chambered their XPR line of bolt-action rifles for the cartridge, and other major gun manufacturers are producing rifles for it as well.

The plus side of this cartridge is that recoil is pretty mild, so it’s a good choice for shooters who need to take recoil into consideration. The Winchester 150-grain Deer Season XP generates 8.52 foot-pounds of recoil in a 7-pound rifle. By comparison, a 250-grain .450 Bushmaster factory load generates 22.99 foot-pounds of recoil, and a full-power 12-gauge slug generates 45 foot-pounds.

The 350 Legend is also designed to work in AR-15 style rifles. It’s been the hot ticket in town over the past few years, and new rifle and deer hunting ammo introductions are happening pretty fast. At this writing, ammo is available from Winchester, Hornady, and Federal.

I have worked pretty extensively with this cartridge on the range with three different rifles, and I have talked with a bunch of other gun guys who have been shooting the 350 Legend. Accuracy can be elusive, and you may need to try a few different types of ammo until you find one that works best in your rifle. This fall will be the first deer season with this cartridge available to the public so we don’t have a lot of information on performance on game yet. But, the numbers say it should be a great little deer cartridge if you don’t get stupid with the distances.

The Straight-Wall Deer Hunting Cartridge With the Most Potential: .444 Marlin

Introduced in 1964, the .444 Marlin was kind of a stretched out .44 Magnum. This cartridge was held back for years by the lack of good factory loaded ammo. Remington had a 265-grain load for a while but dropped it, leaving only the 240-grain factory load. Then Hornady brought out two loads for the cartridge and things changed. The Hornady bullets are heavier and have a higher ballistic coefficient.

This cartridge has the potential to be the best deer hunting ammo of the lot. It’s big and powerful enough, and with good bullets, it may produce the best external ballistics of the bunch. The only thing holding it back right now is the delivery system. While my .444 Marlin lever-action rifle shoots just over one MOA with the Hornady ammo, like all lever actions, it’s not built for precision work. There are a few single-shot rifles out there as well, but this cartridge needs a modern repeating rifle. I am currently building a bolt action .444 Marlin that I am expecting good things from this fall. Perhaps as this trend grows, we will see some bolt-action .444 rifles from the mainstream gun makers. I know at least one has built a prototype, and I am told it’s working well.

While the .444 is near the bottom of the popularity list in current straight-walled rifle cartridges, I expect that will change as hunters discover the potential of this cartridge.

For the moment, the .450 Bushmaster seems to be the most popular deer hunting ammo for states that allow straight-walled cartridges. The idea used to develop the .450 Bushmaster was credited to Jeff Cooper. Cooper was not only an icon of modern tactical applications; he was an serious hunter as well. His “Thumper” concept was a semi-auto rifle larger than .44-caliber, capable of taking big game out to 250 yards. Tim LeGendre of LeMag Firearms LLC developed the .45 Professional cartridge based on that criteria and licensed it to Bushmaster Firearms International for production and distribution.

Bushmaster asked Hornady to produce the .45 Professional, but Hornady wanted to shorten the cartridge case to accommodate their .452-inch, 250-grain pointed SST Flex-Tip bullet. Bushmaster and LeGendre approved the change in case length from 1.771-inch to 1.700-inch. Bushmaster also requested a name change to .450 Bushmaster, to which LeGendre agreed.

The .450 Bushmaster cartridge was developed using a modified .284 Winchester case with a rebated rim. The original loading used a 250-grain bullet with a muzzle velocity of 2200 fps from a 20-inch barrel. The .450 Bushmaster has a SAAMI Mean Average Pressure (MAP) of 38,500 psi. With a 2.260-inch Maximum Overall Cartridge Length, it fits well in the AR-15 platform.

The .450 Bushmaster is capable of using any .452-inch bullet, which opens a lot more doors for handloaders with the wide range of bullets on the market—including some outstanding choices from Barnes. I have used the cartridge with the 275-grain Barnes bullet designed for the .460 S&W to take a truckload of hogs and an Asian water buffalo. The performance all the way around was very impressive. The .450 Bushmaster was designed to work in an AR-15, but it’s also available in bolt-action rifles from Ruger, Mossberg, and others.

Winchester, Hornady, Remington, and maybe a few others offer ammo, but the market is evolving so fast it’s tough to keep up. I have had good luck with the Hornady 250-grain Flextip load. The muzzle velocity is 2200 fps, and the bullet carries a BC of .210.

Born in 1873, .45-70 Govt. among our first successful self-contained metallic rifle cartridges. The .45-70 was developed for the army to be used in the trapdoor Springfield rifle. It served until the .30-40 Krag replaced it in 1892. The cartridge has a cavernous case capacity designed to work with black powder of the era, and it used large-diameter bullets to compensate for the low velocity produced by that propellant. That’s the exact opposite of what’s in vogue with modern rifle cartridges today.

For a while, nobody was making rifles in .45-70 and the cartridge seemed doomed. There are lots of old Springfield rifles around, but it’s a weak design, and it can’t stand a lot of pressure. SAAMI limits the MAP to 28,000 psi. Most gun makers and gun buyers were not interested in new rifles chambered for this underperforming cartridge.

Then the Marlin 1895 lever-action rifle came along in 1972 and changed everything. The .45-70 was a very popular hunting cartridge, even before this straight-walled phenomenon started, but it’s held back by all of those old guns out there. Factory ammo must be safe to use in them, so the .45-70 rarely reaches its full potential. However, in a strong rifle like a Ruger No. 1, the .45-70 can be loaded to impressive performance.