Best Taxidermy from the SCI Convention 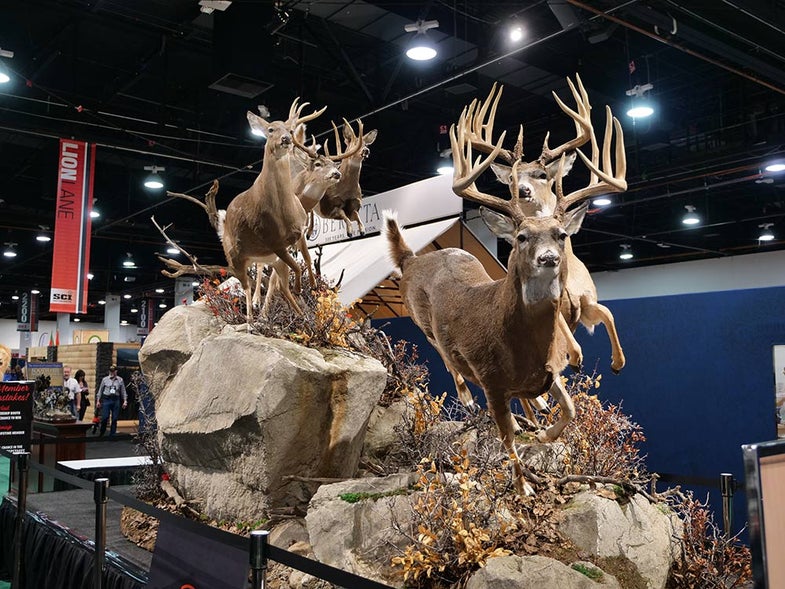 Some of the most incredible taxidermy in the world was recently on display at the Safari Club International’s annual convention, held last week in Las Vegas. From stampeding Cape buffalo, to a tree full of baboons, to a pack of wolves hunting a pair of bull moose, these pieces have more in common with those in the Museum of Natural History than with that dusty buck head hanging at deer camp.

Commissioned by the Blackhawk Museum in Danville, Calif., this diorama of 10 wolves hunting down two bull moose was impossible to miss on the convention floor. Artist Ray Hatfield said the main challenge was the piece’s size. Stretching nearly 30 feet, it comes apart for transport. “Every animal is on one foot to create the flow of running,” Hatfield told me. It certainly does that. It was one of the most photographed pieces of taxidermy at the show.

Here’s another incredible mount from Animal Artistry—and photos don’t do this one justice. The 15-foot replica tree holds six terrified-looking baboons with a lunging South African leopard below, in mid-flight. The tree is built on steel girders to support the animal taxidermy.

Pennsylvania’s Kantai Elite is a full-service taxidermy shop that specializes in life-like replicas. Using a synthetic, resin-like compound, they’ve reproduced the look and feel of elephant skin for displays like this one. It works like this: The hunter takes measurements afield, such as tusk weight and length, along with photos of distinguishing traits like notches in the ear or distinct colorations. Then Kanati does the rest.

Prairie Mountain Wildlife Studio put this show-stopping Alaskan diorama together. The company specializes in custom trophy rooms, complete with synthetic trees and indoor mountains made from a polyurethane resin. This display is destined for the Warren Wildlife Gallery in Austin, Texas.

When the Internet meme “honey badger don’t care” exploded a few years ago, keyboard cowboys everywhere were actually calling taxidermists clamoring for badger mounts. Exceedingly rare, honey badgers can be taken with some regularity in Tanzania, but this one mounted by Animal Artistry came from Uganda. Special importation permits are required, so even a big studio like A.A. only does a few a year.

Whether you know it or not, you’ve probably seen Frank Ritz’s work. His studio has done most of the Africa work for Cabela’s epic store displays. He recently completed 250 full-body mounts for Johnny Morris’s Wonders of Wildlife National Museum & Aquarium. This Namibian leopard guarding its baboon dinner reveals the artist’s affinity for big cats. With lion trophies currently banned for importation to the United States, leopards made up most of the cat taxidermy on display at the show.

Another Frank Zitz mount, these Mid-Asian ibex were taken in Tajikistan. Zitz himself hunted there this past December and has a phone full of ibex photos and videos to draw on for reference—not to mention his decades in the field. Zitz has been on safari in Africa 22 times and has no plans to slow down.

There were several bongos on display at SCI, but this one by taxidermist Bob Vitro really caught my eye. The hunter had limited space in his trophy room, so the bongo was mounted with a yellow back duiker and three Peter’s duikers all taken on the same hunting trip.

Another from Kantai, this whitetail scene was put together to show off the studio’s work with replica antlers—three Booners in this case. The capes come from real deer, but the horns are made from their proprietary synthetic material. At a distance, it’s impossible to tell them apart from the real thing.

There were many buffalo mounts at SCI, but this one was my favorite. Taxidermist Stuart Farnsworth and habitat man Tony Ward teamed up on this running bull. The mount’s “musculature” ripples under the armor-like hide. It looks so real I almost jumped back. Ward said he instructs hunters to take photos not just of their dead critters, but of the local vegetation where they shot it, too.