The Best Clothing, Chemicals, and Sprays to Prevent Tick and Chigger Bites

Ticks and chiggers are nasty blood-suckers. Here’s how to keep them off your skin 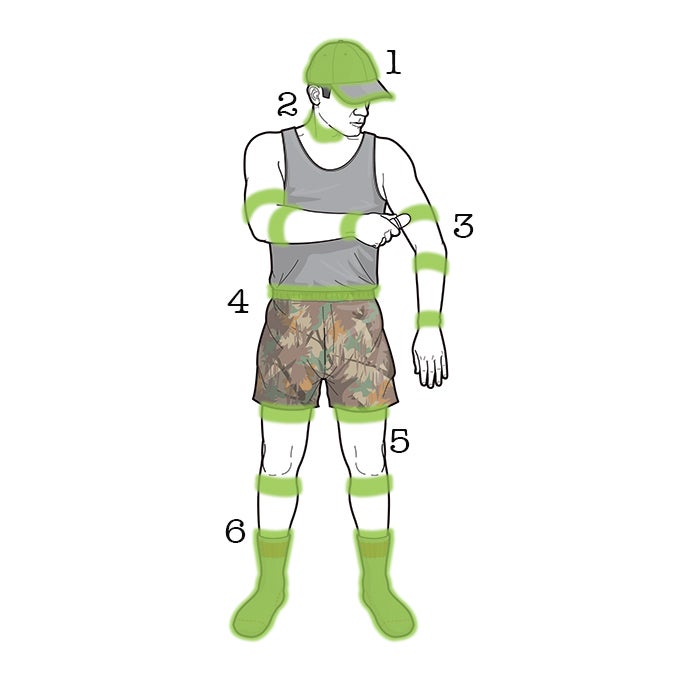 Beat back ticks, chiggers, and other biters with this strategic use of powerful bug dope.
SHARE

Ticks and chiggers don’t play nice. They latch on to boot tops and pants bottoms and begin their insidious ascent into cracks and crevices of your nether regions that you don’t even know you have. While your everyday, ordinary mosquito dinks you for a bit of blood and then flies off on her merry way, these bloodsuckers practically pay rent. Ticks come equipped with a spear-like structure that extends from the mouth, and it’s armed with multiple telescopic rods that end in hooked teeth. That’s how they jab into your hide, and hang tight while tick snot is literally drooled down the spear through a nifty spit channel and into your delicate flesh to thin your blood enough to slurp it up. Chiggers are even worse hangers-on. Once they find a cozy spot they inject digestive enzymes that dissolve epidermal cells, then suck up the semiliquid remains of your skin. Meanwhile, that cud of chigger spit and dissolved skin forms a hard, circular barrier around the bug that shields the chigger from every effort you make to dislodge it. The longer the chigger is attached to your flesh, the deeper this straw-like chigger fortress becomes. And the worse the itching.

No wonder folks have devised a serious array of defensive measures for ticks and chiggers. To turn them back, start at the bottom.

These socks are treated with permethrin, which repels biting insects. Farm 2 Feet

These socks are treated with permethrin, which repels biting insects. Farm 2 Feet

Loomed of yarn treated with permethrin, anti-bug socks are the foundation for a full-body shield against the tiniest invaders. These midweight hikers are high-quality outdoor socks, period, made of itch-free Merino wool that remains cool in hot weather and warm in a freeze. Hidden two-layer seams head off hot spots, and full-density cushioning keeps them comfortable on all-day hunts. But it’s the permethrin bath that gives the socks superhero powers of bug repellency, and it’s good for 70 trips through the washing machine.

Gaiters close off a common access point for ticks—the bottom of your pant legs. Nite Lite

Gaiters close off a common access point for ticks—the bottom of your pant legs. Nite Lite

Leave it to a bunch of raccoon hunters to devise a low-tech, low-cost, why-didn’t-I-think-of-that approach to chigger and tick armor. The Chigger Gaitors are made of a stretchy synthetic material that you pull over boot tops and pant bottoms for a physical barrier to chiggers, ticks, and fire ants. It’s a big upgrade to taping your pants with duct tape. They also keep pants from riding up over your boots when you’re sitting down, exposing skin to the insect hordes.

Rynoskin should be worn as a base layer, and it blocks the fangs of ticks and chiggers. Rynoskin

Rynoskin should be worn as a base layer, and it blocks the fangs of ticks and chiggers. Rynoskin

Don’t laugh. Before you nix the notion of pulling on what is essentially panty hose for your entire body, know this: Rynoskin apparel is chemical-free and breathable. It turns back the fangs of ticks, chiggers, mosquitoes, no-see-ums, sand fleas, black flies, and all the other deplorables of the blood-sucking world. It forms to your body so it slides easily under outer layers. I’ve worn this stuff in some of the chigger-and-seed-tickiest turkey woods in North America, and it works. Comes in shirt, pants, hood, gloves, and socks. As long as you don’t stick out your tongue, you’re good.

Spray permethrin on your clothes and let it dry before heading into the woods. Sawyer

Spray permethrin on your clothes and let it dry before heading into the woods. Sawyer

I’ll be honest: Sometimes armor isn’t quite enough, and chemical warfare is required. A 24-ounce pump bottle of 0.5 percent permethrin will treat at least two full sets of clothing—socks, shoes, underwear, base layers, and outerwear. You wet the goods, let it dry, and take off. It’s good for six home launderings, and safe to spray on all clothing, leather boots, sleeping bags, camp furniture, ball caps, even dogs. It won’t melt plastic or mar rubber. And it works.

Read Next: The Best Gear and Sprays for Repelling Mosquitoes and Stinging Insects

When in doubt, go with DEET. Repel

When in doubt, go with DEET. Repel

DEET is the big gun. It was developed for use by the U.S. Army after the hellish jungle warfare experiences of World War II. It is prepared by converting 3-methylbenzoic acid to acyl chloride, and then letting it react with diethylamine. In its 100-percent applications, it will melt plastic buckles and turn rubber worms to jelly. I love the stuff, for when all else fails, DEET does the trick. A full-strength concoction is overkill, though. Repel’s 40-percent formula is strong enough, and the pump bottle keeps the stuff off your hands. Repel’s roll-on sticks make it easy to apply this strong formula exactly where you need it.

Place these tubes in your backyard to kill ticks that feed on mice. Amazon

Place these tubes in your backyard to kill ticks that feed on mice. Amazon

You don’t have to be in the dark scary woods to pick up disease-carrying ticks. Your yard could be a tick nirvana. This ingenious system kills juvenile ticks that feed on mouse species that are common in urban, suburban, and rural neighborhoods, stopping the threat before it gets a chance to latch on to you, your kids, or your pets. The tubes are filled with fluffy material laced with permethrin. Place them around the yard, and mice scavenge the dry fluffy stuff as nesting material, take a snooze, and dust themselves with the tick-killing chemical. Voila—tick numbers plummet in your hyper-local zip code.

Turn Back Bugs by Applying DEET in These 6 Places

After decades of tinkering, I’ve perfected an insect-protection system that has cut the number of ticks and chigger bites I find on my body by 90 percent or better. Modifying clothing keeps biters out, and precision application of a roll-top or sponge-top insect repellent makes it possible to use strong DEET formulations just where needed. I rarely use anything less than 30 percent, and when the chigger infestations are high, I use 100 percent DEET without hesitation. The idea is not to cover your entire body, but to draw a few concentrated chemical lines that’ll turn back bugs.

Douse the same hat in repellent every time: Apply it to the crown and brim—and don’t forget the very edge. This will produce a vapor barrier in front of your face but keep the chemicals out of your eyes.

Seal off the first entry point to your torso with a stripe around your neck.

Stripes above and below the elbow and around your wrists keep creepies from crawling up your arms.

Pull up your shirt and run a stripe around your waist an inch above where your pants ride.

Stripes below the bottom edge of your underwear on the upper thighs and around each leg below the knee ensure that the tick and chigger recon squad can’t move up or down.

Tuck pant hems into socks and run a band of duct tape around the seam. Apply more DEET to boots, socks, and pant legs below the knees.