When Is the Best Time to Shoot a Giant Whitetail Deer? 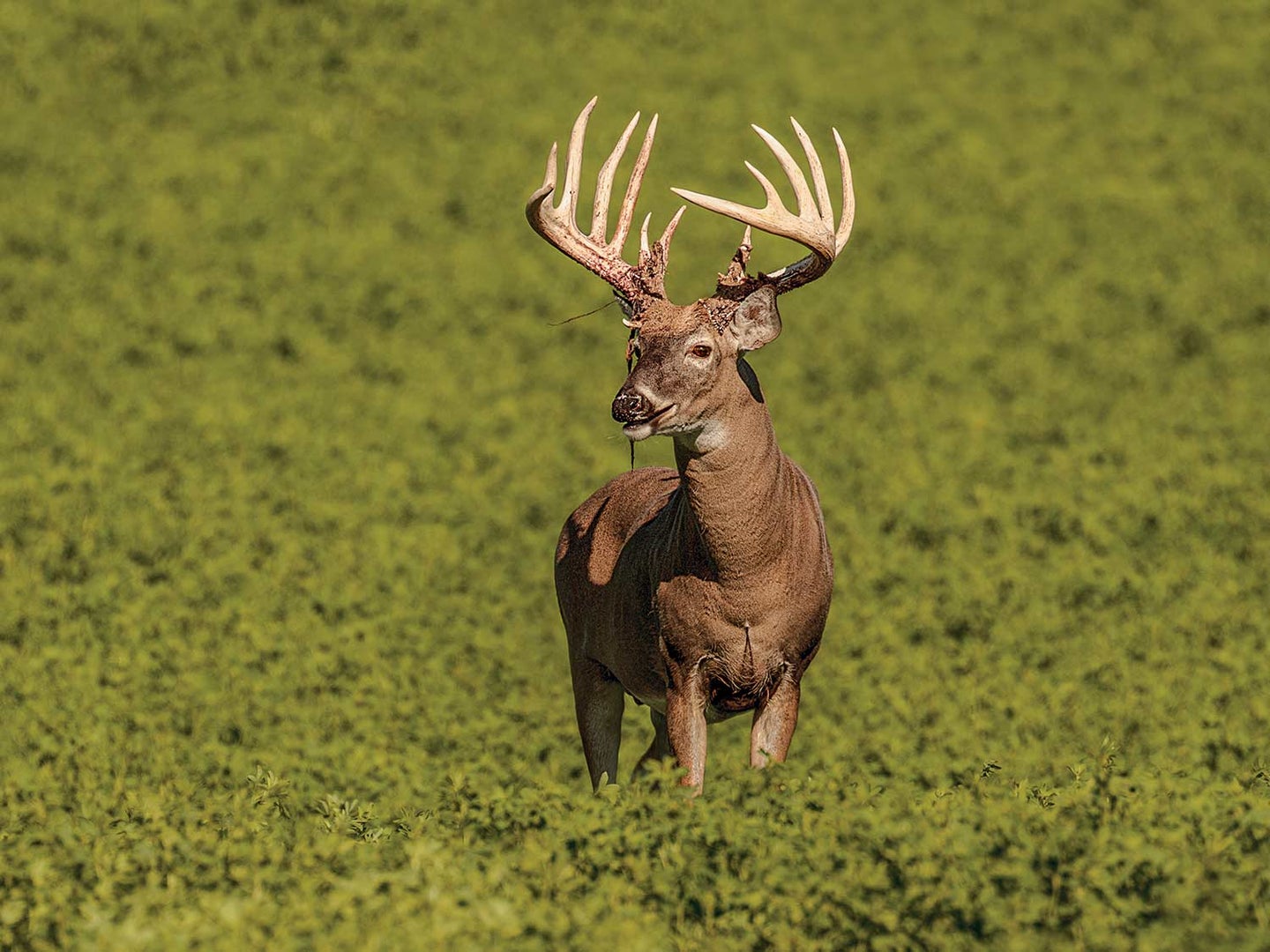 Velvet can make the antlers of even a midsize buck look huge, and make a true monster seem like a mythical creature—which was exactly the vibe I got a few years ago when my neighbor Dave showed me the first trail-cam picture of a giant 10-pointer in late July. Silhouetted against early-morning fog, the buck looked like he had a live oak draped in Spanish moss rooted on his head. His body so dwarfed the doe standing beside him that it looked like he could scoop her up in his rack and flip her over the fence in the background.

“What do you think that deer will score?” Dave asked. This is the snarky question we ask each other whenever our cameras capture a true stud. The correct reply is always the same: “Do you care?”

What made this buck special wasn’t just his size, but also the fact that he lived on an 80-acre chunk of Minnesota timber Dave had purchased just months before. As soon as the deal was inked, Dave and I started planting food plots, hanging and brushing treestands, and mounting cameras. The first few card-pulls revealed several good bucks, and I was ­eager to take my friend up on his offer to trade my preseason help for hunting privileges. I already had several good spots, but I love the idea of hunting a new parcel, and the good bucks on our cameras only sweetened the deal.

But the big 10-pointer changed everything. Dave is an outstanding bowhunter who has taken lots of great bucks over the years, but this one would definitely be his biggest. When I saw the picture, I had two thoughts: First, my friend wouldn’t repeal his offer just because a whopper buck had shown up, and second, I would much rather he tag the giant. So when archery season opened, I hunted everywhere else. Whenever Dave asked me to join him, I had perfectly legitimate ­excuses to hunt other places. I had a solid 8-pointer regularly hitting a clover plot, a good bachelor group of bucks hanging around a secluded alfalfa field, and a smattering of new rubs in an oak stand, which told me that the beginning of the acorn drop might be the perfect time to ambush a huge, funky 6-pointer that had first tripped my trigger a year earlier. So, I hopped between my own spots when the wind and conditions were right, but the bucks that should have shown never did.

You often hear that September whitetails are like trains on a track. They hit a food source reliably enough that we can pattern and kill them in just a few sits. This happens frequently enough to legitimize the idea, but in reality, it’s more the exception than the rule. Early-season bucks are indeed slaves to their stomachs, but that gut is serving a whole lot of masters. In September, a buck can get up from his bed and decide to dine on acorns, apples, persimmons, alfalfa, clover, or a half-dozen other things. Because the early-fall woods are such a deer buffet, meeting up with a buck is often a matter of constant scouting and then hopping around to multiple hotspots—including the not-so-predictable ones.

Finally, Dave called one late-September afternoon. “I’m hunting the 80 tonight, and you’re coming with.” I hemmed and hawed, but he saw through me. “Why aren’t you hunting there with me?” he asked. I finally confessed, and Dave was as direct as a polite-to-a-fault Minnesota dairy farmer can be. “You’re going with me tonight, and if you see that big one and don’t kill him, I’m going to be mad.”

So we went. Dave sat overlooking a line of hot scrapes just off a lush alfalfa field where we’d gotten lots of pictures of the big 10. Another little-​­recognized fact about mature bucks in the early season is that they love to rub and scrape, and spoor will often reveal their favorite feeding spot. I chose a location where I felt I had the poorest chance of seeing, much less arrowing, the buck—a food plot in the bottom of a valley where our camera had captured him only twice in three months.

That afternoon, the big 10 proved three important facts about early-season bucks. First, they detest moving where a gusty wind robs them of their senses of hearing and smell, which is why the buck avoided Dave’s ridgetop setup. Second, sometimes an overlooked tidbit food source—like the late-blooming clover that was sprouting in the little food plot next to my stand—can distract a buck from more obvious grub. Finally, and the only support I have for this is intuition and a whole bunch of dead bucks (only a few of which were mine), I think some deer are just destined to be shot by one hunter and no one else.

So help me, that giant 10-point trotted down the hillside 45 minutes before dark, watched a half-dozen other deer enter the plot and walk in a direction opposite my setup, and instead of following them, flicked his tail and fed toward me until he was just 28 yards away. My knees were knocking so hard, I could hear my tripod stand squeaking, but that deer never even looked my way as I drew, anchored, and sent the arrow behind his left shoulder.

One of my other buddies often repeats a hard-learned deer-hunting motto: “Plenty of people are happy to let you hunt—right up until you kill one of their big deer.” I’ve seen those words proved true more than once, so I was a little nervous when I met Dave at the truck after dark. Sure, he’d basically ordered me to kill the big 10, but talking about arrowing a monster buck and actually doing it are planets apart. I listened to Dave’s hunt report, which involved lots of wind and few deer. Then I plucked the blood-streaked arrow from my quiver and held it up. “Please tell me that went through the big 10,” Dave said. I nodded and smiled, and then had to plant my feet to absorb the impact of my friend’s back slap and handshake. “Let’s go get him,” Dave said, grabbing one flashlight and handing me another. “You can tell me the story on the way.”