Big Bucks at 10 Yards: Lessons from a Traditional Bowhunter

This Kentucky hunter kills a trophy whitetail just about every fall with his longbow. Here’s his advice for getting closer 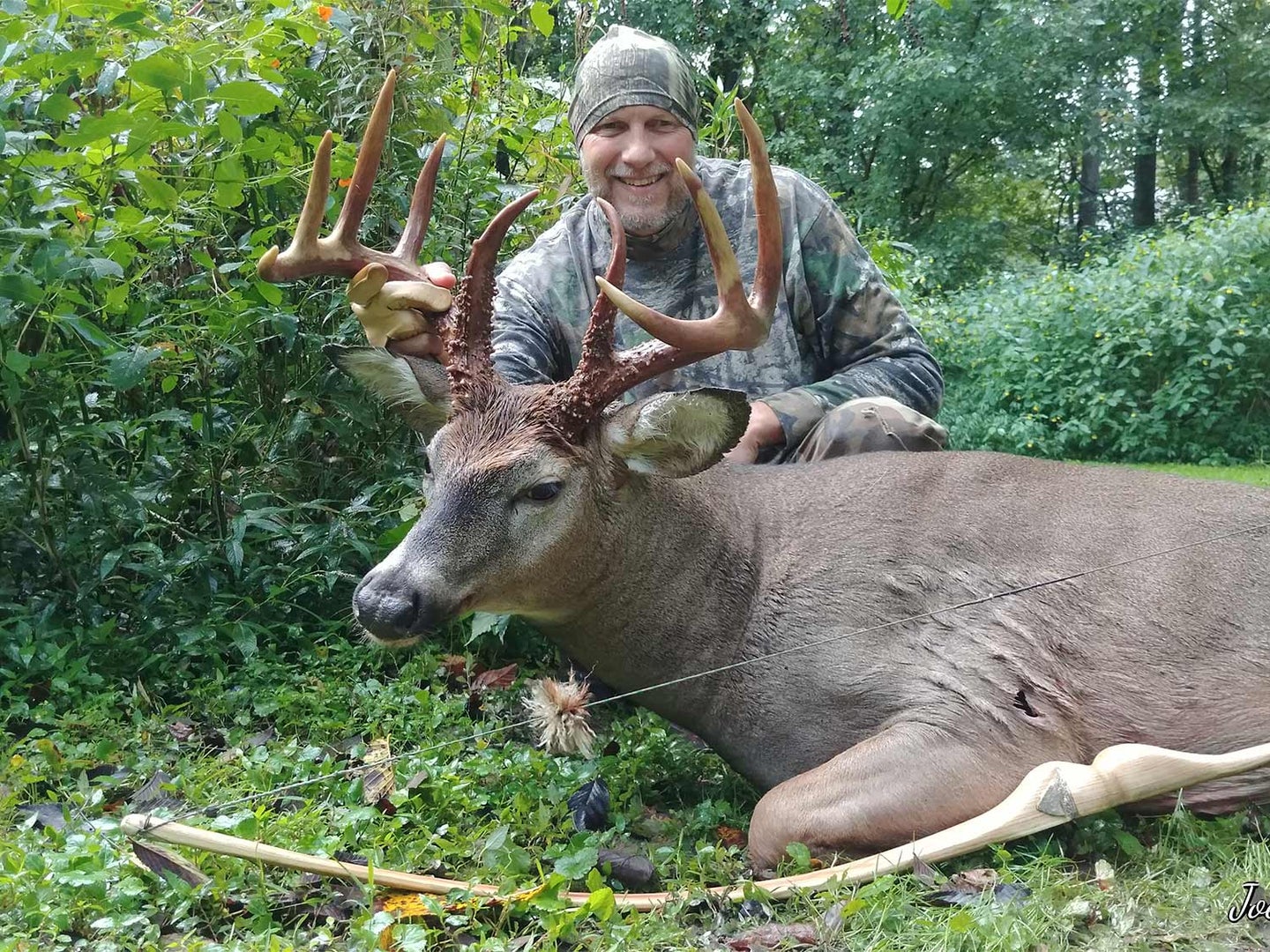 Lacefield with a big 9-pointer taken in 2017. Joe Lacefield
SHARE

Joe Lacefield doesn’t carry a rangefinder. With his longbow, he’s comfortable to 20 yards—but he’d much rather have deer at 10, and at that distance, he can eyeball things well enough. “If I can’t throw a rock and maybe hit it, I’m not shooting at it,” he says.

But the range limitation doesn’t keep him from filling tags. Lacefield shoots a truckload of does, and as many good bucks as anyone I know. In early October of this season, he killed a mid-140s 8-pointer. That one’s far from his biggest. Back in 2012, he arrowed a giant 10 with double drop tines. Lacefield has punched his buck tag with trad gear nearly every season since 2009, when he took the stick bow plunge.

Regardless of what you hunt with, you can learn a lot from a guy like that.

Lacefield’s edge has been honed from a lifetime in the woods. He’s traveled a bit to hunt—some road trips for public-land elk and the like—but most of his experience comes from central Kentucky where, as a kid, he learned to hunt, fish, and trap from his dad.

“Dad was a correctional officer for the federal government—and sometimes a correctional officer at home,” Lacefield laughs. “He got me a shotgun, a single-shot Ithaca lever-action 20-gauge, for Christmas when I was seven. The next fall, he decided I was safe enough to go squirrel hunting by myself, but not with my friends. He was afraid two boys hunting together would start horse playing and have an accident.”

His dad gave him a box of shotgun shells and told him that if he didn’t get 23 squirrels out of that box, he wasn’t buying anymore. “I was sure careful with my shots,” Lacefield says. “I chased down several wounded squirrels with sticks, too.”

But that strict oversight was a good thing. Lacefield learned to get close to critters and to take prudent shots. He bought his first rifle at age 15 with fur money he’d saved from trapping, and he killed his first deer with that gun, a Model 700 .243 (still only the centerfire rifle he’s ever owned). But in those days, Kentucky only had a three-day rifle season. Lacefield wanted to hunt more often than that, so he decided to get a bow.

His first one was a used Bear Alaskan, a late-70s-model compound with around 40 percent let-off. (Legend has it that the Alaskan was the only compound bow Fred Bear was ever photographed shooting. The draw cycle so seriously messed with Papa Bear’s instinctive shooting style that he swore off training wheels for the rest of his life.

Success came quickly for Lacefield. He killed a deer during his first weekend of bowhunting, and the archery bug bit hard. He shot competitively for a while, and even gained a few sponsors. He continued punching tags for good bucks, too. But as the equipment evolved, Lacefield found that something was missing.

“I wouldn’t say I became bored with hunting with a compound, but if there was a deer within 60 yards that wasn’t alert, I was confident that I could put a laser rangefinder on it and make the shot,” he said. “The last buck I killed with a compound was a big 14-pointer. He was chasing a doe, and I’d ranged a tree at 57 yards. He stopped there, I shot him, and he ran 10 yards and tipped over.”

Lacefield had a buddy who’d given him a recurve, and so later that winter, he decided to try it. He killed a doe—and it was as if the archery bug had bitten him all over again.

Lacefield is a private lands biologist with the Kentucky Department of Fish and Wildlife Resources. He works an 11-county area, and his job description varies by the season. He might be banding ducks one day and investigating a call from someone who’s sure they saw a mountain lion the next. But a good portion of his time is spent walking farms with landowners and helping them come up with solutions for improving their habitat and seeing more wildlife.

Between that and his own time afield with such a short-range weapon, Lacefield has learned to identify the consistent shortcomings hunters have when it comes to killing big deer. Despite all the advice out there cautioning against it, for example, he sees people hunting their favorite stands over and again, regardless of the wind direction. “They think they have a feeder and the deer are coming to it, so the wind doesn’t matter. I see a lot of that during gun season, especially,” he says. “People think they’ll shoot a buck before it smells them, but that usually won’t happen.”

Lacefield prefers to hunt days with a steady breeze. “If there’s no wind, your scent is everywhere,” he says. “It flows across the landscape like water, especially at dusk.”

Poor concealment is another frequent offense. Hunters want to set up where they can see 100 yards, but they seriously underestimate a whitetail’s vision and get busted when they’re moving around. Or they set a stand in a great spot, but cut out all the cover around them in the name of creating shooting lanes. And a lot of bow stands just aren’t high enough. Lacefield hates hunting ladder stands for that very reason. He likes to be at least 20 feet up in a tree—and he says when he was hunting with a compound, 30 feet was more like it.

“Access” is today’s buzzword among serious whitetail hunters. Better to hunt a marginal stand with undetected access than a prime spot that you can’t get into and out of without spooking deer, right? Lacefield agrees with that—to an extent. But at some point, you have to go hunting, too. He has a few go-to areas that he hunts year after year, but he’s a big believer in staying mobile and striking in the best spots when they’re hot. He hunts three different properties, none of which he has to himself. And he almost never hunts the same stand two sits in a row. “I hunt with climbers a lot, and I like Millennium lock-ons, too,” he says. “But I don’t like to hunt the same spot twice. I’d rather pack a stand in with me to different locations.”

Lacefield is a self-described trail camera addict, too, relying heavily on them for making aggressive moves when the time is right. “I run five or six cameras at a time, from summer through January. The trapper in me loves checking them,” he says. “Every year, I hear guys say they see bucks on the hoof that they never got on camera. But I don’t experience that much. When I start seeing scrapes in September—and they’re out there in September—I put cameras on them. When I’m hunting, I rarely see deer that I don’t have pictures of.”

There’s an old adage: “Take the first good shot you know you can make.” But hunting with a longbow has forced Lacefield to become more patient. He says 30-yard opportunities will frequently become 10-yard opportunities, if you let them. “People get in a hurry and force shots. They finally get a buck in range, and they’re afraid he’s going to bust them. And then they shoot and make a bad hit,” he says. “It’s better to let a deer wind you than to wound him.”

Shot distance aside, Lacefield’s range of motion is limited, too, which means he has to become even pickier about his opportunities. “There’s a big difference in wielding a 34-inch compound and a 68-inch longbow up in the tree,” he says. “I can only shoot from about 10 o’clock to 2.”

At full draw, most of Lacefield’s bows (he frequently makes a new one ahead of each season) peak at 50 pounds. But his gear isn’t completely old-school. “The purist guys may not like it, but I do use carbon arrows,” he says. “I’ve never seen arrows made of river cane shoot as well as carbon arrows do.”

He adds a 50-grain brass insert, and shoots modern broadheads—often 3-blade Muzzys, though he killed his buck this year with a 125-grain Snuffer. He requires a broadhead to hit where he’s looking, and that it’s shaving-sharp. “Too many people go out there with dull broadheads. That a broadhead can tear through the vitals without cutting blood vessels is absolutely true,” he says. “They have to be sharp to do their job.”

On This Year’s Buck

Given everything above, the story of this year’s buck almost reads like an example from a textbook. Lacefield had pictures of the deer, and when the wind turned favorable following a big cold front, he made his move, hunting a favorite spot next to a fence crossing. It was his first time sitting that spot this year. “I’ve killed several deer from that tree,” he says. “When you’ve got the right wind and haven’t been in there messing around, odds are high you’ll get an opportunity.”

Lacefield saw the buck coming from across the fence, but he had to wait—the fence marked the property line. The deer approached the crossing a few times, but kept turning back, temporarily melting out of sight into a honeysuckle patch. “I couldn’t see him, but I could hear him in the thicket,” Lacefield says. “He came to the fence and turned back around I don’t know how many times. I thought for sure he smelled something he didn’t like.”

Maybe so, but eventually, the buck settled down and hopped through the gap. “It happened fast then. He gave me about a 12-yard, quartering-away shot,” Lacefield says. “He was dead in less than 10 seconds. I watched him fall.”