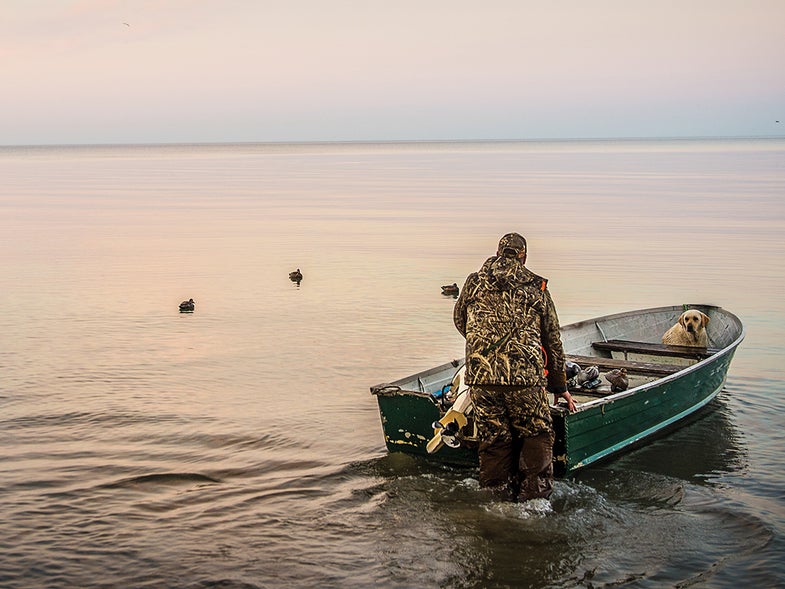 I was surprised to see another hunter had beaten me to the boat ramp. Waves from a hard north wind were lapping against the bank when the graying man walked up to me and asked if I was hunting alone. I’d planned on it, yes. He had the same plan. “Let’s say a prayer, then,” he said.

By the light of a headlamp the stranger asked for our safety on the big lake—a place where, the season before, three young hunters had lost their lives when their boat capsized. With an “Amen,” he unlatched the bow strap to his boat and smiled. “This should be a great morning.”

It was. I shot my limit early, and as I was picking up, I could hear the pops of one gun on a distant island. The stranger got his ducks as well.

Big lakes, rivers, and coastlines—many open to public hunting—provide incredible opportunities for a variety of duck species at this time of year. But the threats of hypothermia and drowning cannot be overstated. If you’re going to be a late-season big-­water hunter, the advice from these pros will make you more successful—and help keep you safe.

A little prayer never hurts, either.

Set Up on Big Rivers For Puddle Ducks and Divers

Mario Friendy, who works for Zink Calls, hunts the Columbia River in Oregon. “The hunting can be incredible. You have puddle duck days and diver hunting days,” he says. “This river is no joke, though. Mistakes can kill you. But there is nowhere in the world I’d rather hunt. You earn these birds.”

Set Your Decoys for Either Divers or Puddle Ducks

Puddle ducks and diving ducks are as different as turkeys and quail in their habits. Still, many hunters attempt to set up for both by adding a few bluebill decoys to a mallard spread or vice versa. The result is a spread that’s not ideal for either.

Friendy has greater success by planning specifically for divers or puddlers on a given day. “They’re completely different hunts,” he says. “Some days divers are the sure bet, so I change out all the decoys in the boat to hunt them. Scouting should tell you which hunt has the higher odds.”

Scout Heavily and Hunt Away From the Crowd

Hunting pressure is heavy on the Columbia, but miles of public shoreline make it easy to spread out. “I might see a bunch of ducks in a specific area, but I won’t sit there if it’s where all the other hunters will be, too,” Friendy says.

“Years of experience and scouting have taught us where the ducks go—and what flight lines they take to get there—once the shooting starts. That’s how we pick our spots.” Often, sacrificing some hunting time for more scouting makes a huge impact on long-term success.

Find a Good Hide For the Boat

Friendy usually hunts from his boat with a boat blind. “When we’re after puddle ducks, it’s important to pick an area that’s not only a good place to set decoys, but a good place to hide the boat,” he says. “Otherwise, they see you as they circle overhead. You can get away with less cover when you’re diver hunting because they come in so low, but we still like to tuck into the brush as much as we can.”

Rig Your Decoys for Rivers

Regardless of what you’re hunting, your decoys have to be appropriately rigged for the conditions. Friendy uses a longline spread for diver hunting in the deep water, and his lines are anchored on the ends by heavy weights.

His puddle ducks are rigged individually but still specialized. “They all have 22 feet of line with 6-ounce weights,” he says. “We set them in the shallows, but often we’re right next to deep water. Without the extra line and weight for windy days, you’re going to lose a bunch of decoys.”

Read Next: 10 Essentials of a Big-Water Duck Boat

Chase Ducks All Winter On The Great Lakes

Joe Balog grew up in the southern Great Lakes area, and he has a lifetime of experience on Erie and St. Clair. For years, Balog dominated area bass tournaments. But in winter, he switches from fish to ducks on the vast marshes of Lake St. Clair. “The possibilities are endless,” he says. “It’s massive water with massive migrations. You can see things there that no one else ever sees.” But St. Clair is dangerous, especially late in the season, when the lake begins to freeze. Ice is harsh on equipment—but Balog says there’s no better time to hunt.

E-Scout For Open Water When Things Start to Freeze

“When it starts freezing, ducks pour into whatever open water remains,” Balog says. “Some areas never freeze. Google Earth is an excellent resource for identifying creeks and channels that have enough current to keep a pocket open. I scout a lot while I’m hunting, and I’m not shy about moving the entire spread to a better place if needed. I’ve found some of my best areas by running my boat after the season and marking open-water locations for the following year.”

Big numbers of ducks will cram into small pockets of open water. “We see mostly mallards and black ducks that time of year, and they’ll be grouped close together to keep warm and keep the pocket open,” Balog says. “So that’s what I replicate. I use four to five dozen mallard and black duck decoys, mostly resters, and I set them tight.”

Disappear into Any Nearby Cover

“Total concealment is the difference between ducks skirting the spread and finishing at 15 yards,” Balog says. The marshes around St. Clair are full of reeds and cattails that provide convenient cover, but you can still be exposed overhead. “If circling ducks look down and see you, the boat, or the dog, they’re done,” he says. “We carry pieces of conduit with grass mats attached to pull over the top of us. We wear face paint. I don’t mind dragging my boat 300 yards across the marsh if that’s where it needs to be to stay out of sight.”

SAFETY: Be a Big-Water Prepper

Every hunter interviewed stressed the importance of preparation for safely hunting big water. Bring the tools—and the knowledge—to fix your motor if it breaks down. Carry a GPS and VHF radio onboard. Balog keeps an extra battery and camouflage Minn Kota trolling motor in his boat as a backup means of getting to the bank. Hypothermia is a killer. An extra set of warm, dry clothes can keep you from freezing to death. —W.B.

Take to The Open Seas to Hunt Divers and Sea Ducks

Maryland’s Wayne Radcliffe, who works for Banded and Avery Outdoors, was hunting sea ducks before it was cool. Once scoffed at, sea ducks are now a bucket-list hunt for many waterfowlers. “To me, there’s nothing like shooting sea ducks at 10 yards from a layout boat,” he says. “Used to be, there were places you could set up and kill a limit of scoters on just about any given day. But they get a lot more pressure these days. You have to work a little harder.”

A sturdy tender boat is the lifeline to the layout boat in the open ocean. Radcliffe’s tender is a 23-foot center-console fiberglass rig, but even in that, things can get dicey in bad weather. Watching the forecast and knowing when not to hunt is a skill to master quickly.

Wait Until You See Birds To Set Your Spread

Most hunters envision big spreads for divers and sea ducks, but Radcliffe says it’s more important to find the hot flight lines and set up where the birds are headed. “I’m in the boat before first light, but I rarely drop a decoy until I see where the birds want to be and the paths they’re flying to get there. Sea ducks fly till 10 or 11 most days. That gives you plenty of time to figure out what’s going on before committing to a spread.”

Match Your Decoys to The Ducks You’re After

There are modern decoys to match virtually every species of sea duck and diving duck, and because they’re so realistic, Radcliffe gets by with using relatively few of them. He typically hunts scoters, so he uses three to four dozen Greenhead Gear scoter decoys set on longlines. But he says that you should match the decoys to the species you’re after. Goldeneyes and buffleheads, in particular, can be very picky about where they will sit.

Control Your Boat and Your Spread

Before setting any decoys, Radcliffe positions the layout boat. “You have to anchor it to accommodate the shooters, depending on whether they’re right- or left-handed, and you need to be able to get to the layout boat with the tender boat without getting the outboard prop into the decoy lines,” he says. “Good boat control is critical for setting the spread, and you really need help—one guy to run the boat and another to handle the decoys. I like to drift with the tide and wind, and run the lines out the front of the boat.”