Last season was special for top-end bucks, and 2017 could be even better 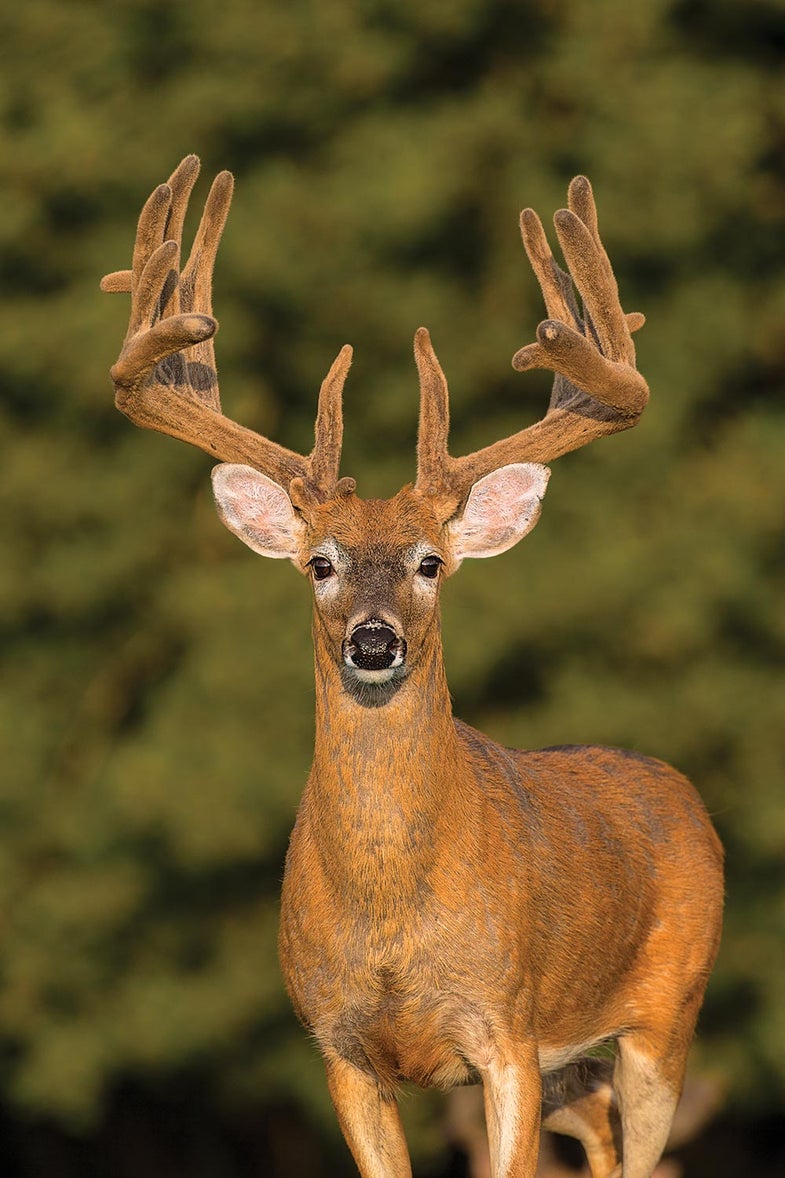 Huge Potential: This monster summer buck may be a preview of fall 2017.. F&S
SHARE

In the annals of trophy whitetail bucks, the year 2016 will go down as one to remember. On Nov. 7, 27-year-old Tennessean Stephen Tucker killed the largest hunter-killed nontypical whitetail ever taken. With 47 scorable points, the 312-inch giant easily toppled the long-famous 307⅝-inch Lovstuen buck for that distinction. Just a few weeks after Tucker’s buck rocked the whitetail world, on Nov. 21 Iowan Deric Sieck arrowed a 282²/₈-inch behemoth that now stands as the second-largest bow-killed whitetail in history.

In short, monster-buck lightning struck twice in 2016—and yet the fact that these two giant whitetails fell in the same season was, oddly, predictable. In the Feb.–Mar. 2016 issue of Field & Stream, we covered what was widely described as a “crash” in whitetail numbers, in which years of aggressive antlerless harvests combined with a pair of epic EHD outbreaks brought deer numbers down nationwide, and especially in several midwestern ­trophy-buck strongholds. Making matters worse, northern states endured the monstrous winter of 2012–13, which resulted in winterkills the likes of which had not been seen in decades.

But in our coverage of the crash, Justin Spring, assistant director of records for the Boone and Crockett Club, offered one of the few silver linings. “If history is any teacher, we may see more top-end bucks shot in the next few years,” he told me then. “If you look at our books, most of the really big whitetails came from areas with relatively low deer densities.” It comes down to simple math, he explained. Fewer deer on the landscape means less competition for prime feed and less social stress. “Under those conditions, bucks that have the potential to get truly large have the chance to do so.”

Bigger Bucks by the Numbers

Now, a year and a half later, Spring’s crystal ball is proving eerily accurate. When we talked recently, I asked him to analyze his own prediction, to scan the B&C records for a bump in top-end whitetails in the years following the crash. While anomalies always pop up in any dissection like this, what emerged was a pretty obvious trend toward more big bucks and bigger top-end bucks.

“If you look just at a traditional hotspot like Iowa, we’ve seen a general increase in the average size of entries,” Spring says. According to his research, in 2016 the average typical whitetail score was up by 12 inches in the Hawkeye State compared with 2013 (in the thick of the crash). The average nontypical score rose by over 10 inches, and the top-end nontyp was a remarkable 50 inches larger.

The trend became even clearer when Spring added five other perennial trophy whitetail hotspots—­Illinois, Kentucky, Minnesota, Ohio, and Wisconsin—and ran the overall numbers. In 2013, hunters from the six-state region entered 41 typical bucks in the B&C book; from 2014 to 2016 there were 186 B&C typicals recorded, for an average of 62 per year, more than a 50 percent increase compared with the heart of the crash. Not all states noted big increases, and the average size of B&C typicals was up only marginally, but the sheer number of entries took a major leap.

What if you don’t do your hunting in a trophy state? In fact, this more than 50 percent increase in typical entries holds true when you crunch the numbers for all states and Canadian provinces. In 2013, the total number was 173; from 2014 to 2016 it was 733, for an average of 244 per year—which suggests that hunters everywhere are seeing lots more B&C-class typical whitetails.

The stats for top-end nontypical bucks are just as convincing. The biggest nontyps tend to be older deer, and to me, their total inches of antler better reflect true max potential. The total number of nontyp entries increased somewhat in the six trophy states, but the average size of the bucks rose sharply. In 2013, the top nontypicals from the region averaged 217 inches. From 2014 to 2016, that average climbed by an impressive 17 inches. The only state that didn’t exhibit an increase in this category was Kentucky (which actually escaped the crash), and several states saw higher-than-average bumps: Iowa (where the bar is already very high) climbed 18 inches, Ohio soared by 33, and Minnesota skyrocketed a full 42 inches.

A general drop in whitetail numbers is clearly not the sole factor producing top-end bucks lately. Winters have been generally milder, EHD outbreaks that devastated herds in some states have moderated, and hunter behavior has been changing for years.

“Hunters are simply letting young bucks go in higher numbers every year, and the age structure of the buck harvest is older than it’s ever been,” says the QDMA’s Kip Adams. “In 2015 the percentage of mature bucks in the national harvest (35 percent) exceeded that of yearling bucks (34 percent) for the first time ever. In some states, the percentage of mature bucks in the harvest is truly amazing. In Mississippi, 77 percent of the bucks shot by hunters in 2015 were 3½ or older, and Texas (75 percent), Arkansas (74), Louisiana (67), and Oklahoma (60) weren’t far behind.”

All of these trends together are what led to such a stellar 2016. And they all point to another great—and perhaps even better—season in 2017. After another relatively easy winter across much of the country, and barring a major EHD outbreak this summer or fall, we should put even more bucks and more top-end bucks in the book this year. “I was surprised to see great bucks coming from areas that had been hit hard by EHD only a few years ago,” Spring says. “And there are EHD areas where deer are still recovering, so I’m pretty encouraged.”

It’s been 24 years since Milo Hanson shot the B&C world-record typical, and over 50 seasons have passed since Mel Johnson tagged the P&Y typical leader. It’s about time that one or both of those incredible bucks made room for a new No. 1, and the conditions are lining up perfectly.