Blast from the Past: 1898 Springfield Krag Jørgensen

Even at 111 years old, this sporterized classic is still a killer in the whitetail woods 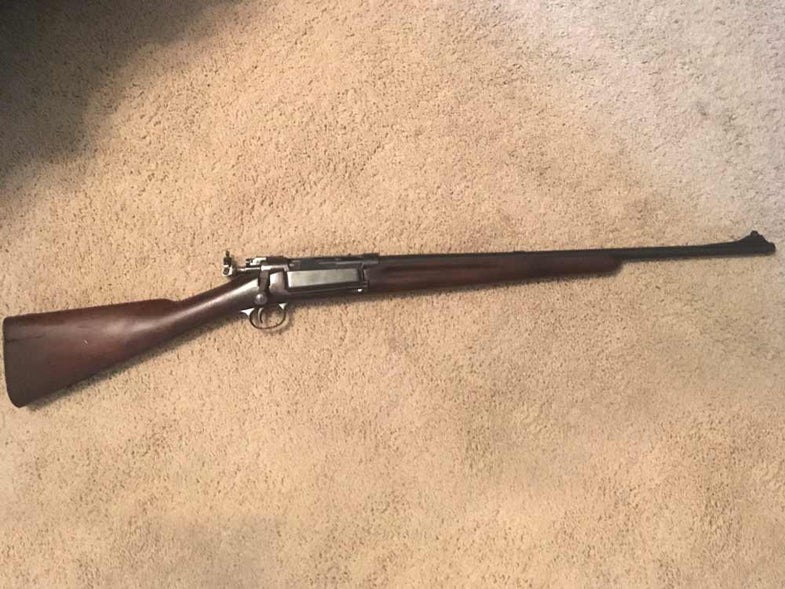 More than a century after it was manufactured, this rifle remains in mint condition. From Jon
SHARE

In 1892, the U.S. Army held trials to find a new service rifle. The Army wanted a bolt action to replace the trapdoor Springfield, and the winner out more than 40 entrants was the Krag-Jørgensen from Norway. Produced by the Springfield Armory as the 1892 Springfield, the Krag-Jørgensen was made in several rifle and carbine variants over the next decade. It served in the Spanish American War, Philippine Insurrection and the Boxer Rebellion.

The Krag-Jørgensen loaded by means of a box, almost a hopper, on the right side of the receiver. You opened the lid, dropped in five cartridges, and shut it. A rotary lever inside cycled the ammunition. Interestingly enough, the Springfield Krags had a magazine cutoff lever on the left side of the receiver. The Army was just getting used to the idea of repeating rifles and was afraid a bolt action would encourage soldiers to waste ammunition, causing supply problems. Many officers still believed in volley fire, also. The magazine cut-off was intended to be engaged during long-range fights, when soldiers were to use the rifle as a single shot and load one round at a time. That way the ammo in the magazine was there as a reserve, in case of close-range combat.

As the first U.S. Army rifle chambered for a smokeless cartridge, the U.S. version of the Krag-Jørgensen was chambered for the new, small-bore (“small bore” when compared to a .45-70) .30-40 cartridge. While the United States won the Spanish American War, the Krag-Jørgensen compared poorly to the Mausers used by the Spanish troops, which fired higher velocity ammunition and reloaded quickly with stripper clips. As a result, the Krag was replaced with the 1903 Springfield. The Krag-Jørgensen and the .30/40 cartridge were popular for hunting, and many surplus rifles, like today’s, were sporterized.

This Springfield 1898 in .30/40 Krag belonged to my wife’s grandfather who nicely sporterized it. The barrel has been cut down and re-crowned with a Marble’s No. 3 ivory bead and a Lyman 1A peep sight dovetailed into the bolt plunger. This rifle was manufactured in 1901, and 111 years later I was fortunate to kill two does while stationed at Fort Benning, Georgia. The bolt is glass smooth and since it is in such nice, if not original, condition, I only hunt with it on perfectly dry days.