Blasts From the Past: Engraved Winchester Model 90 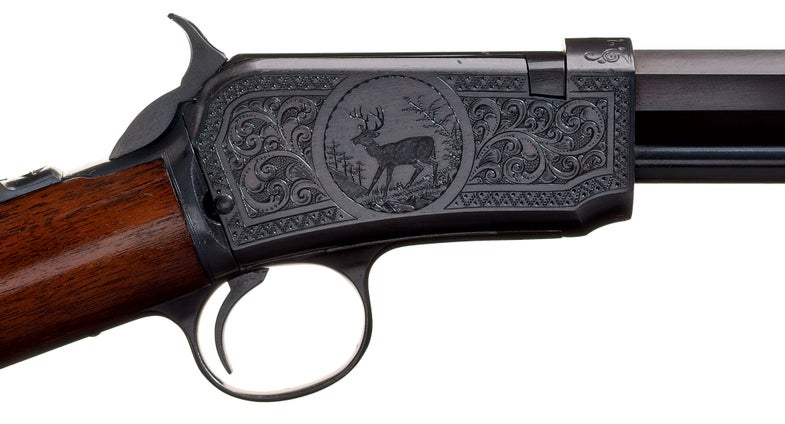 Today’s gun is a beautifully engraved version of the Winchester Model 90, a slide-action John Browning design that endured for over 40 years—almost 70 if you count its successor, the Model 62. In 1890, the Model 90 replaced the rimfire version of the great 1873.

While the centerfire ‘73 gained fame as the “Gun that Won the West”, the rimfire version fizzled. That’s when Winchester turned to John Browning, who was in the midst of a gun-inventing rampage, for a replacement.

The Model 90 included a carrier refined to handle .22 short cartridges, which cycled poorly in other .22 repeaters. As a result, the Model 90 became immensely popular as a gallery gun, both in the U.S. and abroad. So popular was it in England, that shooting galleries were known as “Winchester Rifle Ranges”—much as Kleenex and Frigidaire became synonymous with tissues and refrigerators.

The Model 90 was a fine small-game and target rifle, too. A rounded barrel model, the 06, followed. By 1932, 1.6 million were made when Winchester updated the design as the Model 62—essentially the same rifle but improved to fire .22 short, long, and LR.

The version of the Model 90 we’ve got today is not a gallery gun, as it’s chambered in .22 Winchester Rimfire (.22 WRF)—a longer, more powerful cartridge than the .22 LR. This rifle bears the Winchester “No. 9” engraving pattern with scroll decoration and a deer on either side. It also features a fancy walnut stock and a Lyman tang rear with globe front sight.

RELATED: Blasts From the Past: MacNaughton Bar-in-Wood