Blast from the Past: High Standard HB 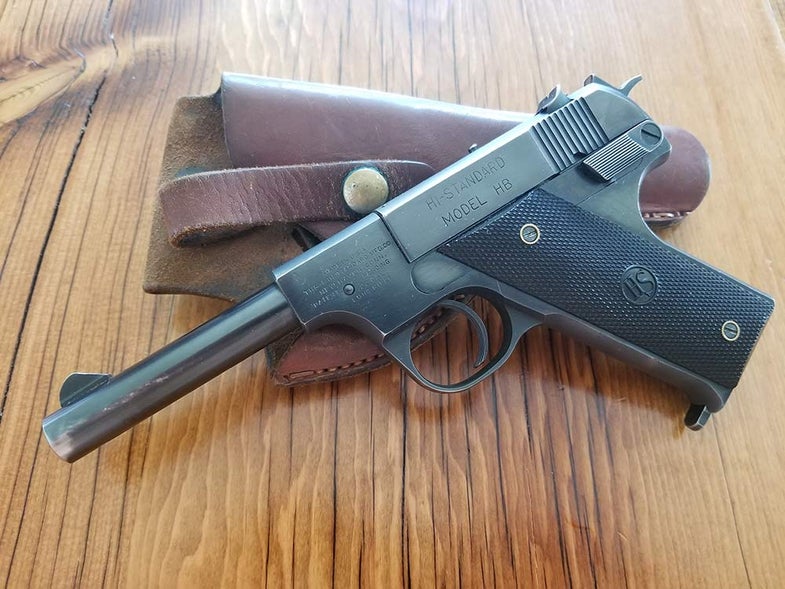 A newly cleaned HB is ready for the squirrel woods this fall. From Team Asgrow
SHARE

Along with today’s gun, we get a terrific picture of a Greatest Generation couple. The gun in question is a High Standard HB. “H” stands for “hammer,” incidentally, and the exposed hammer makes these models a rarity among .22 semiautos, most of which are hammerless.

High Standard was founded in 1926, but didn’t start producing pistols in earnest until 1932, when High Standard bought out the Hartford Manufacturing plant. World War II came along, and the military ordered tons of High Standards as trainers because there were ergonomic similarities between the High Standard and the 1911—and because .22 rimfire cost a lot less to shoot. The guns remained very popular after the war, as many GIs, like Team Asgrow’s grandfather, were familiar with them from their time in the service. The “HDM” model—very similar, but with an integral suppressor—served with the OSS during the war and with the CIA afterwards. U2 pilots carried them, including Francis Gary Powers, and the Soviets made a great deal out of the fact that he was carrying a “spy pistol” when he was shot down.

This High Standard HB was recently given to me by my father. It was a gun that my grandfather acquired via trade. My grandfather was a navigator on supply planes flying between the Midwest and Central and South America, and he carried a .38 special on those flights. He traded the .38 to another man even up for the High Standard.

I have attached a picture of my grandparents shortly after WWII, and you can see the High Standard on my grandfather’s side. I have no doubt in my mind that my possession of this firearm pleases my grandfather. I immediately had my gunsmith look over and clean the gun after I was in possession. I plan to shoot and carry this gun a lot over the course of the next Iowa squirrel season.