A Blast from the Past: “Jeremiah Johnson’s” Hawken

We’ve got a good one this week thanks to our friends at the Cody Firearms Museum: John Johnston’s Hawken and... 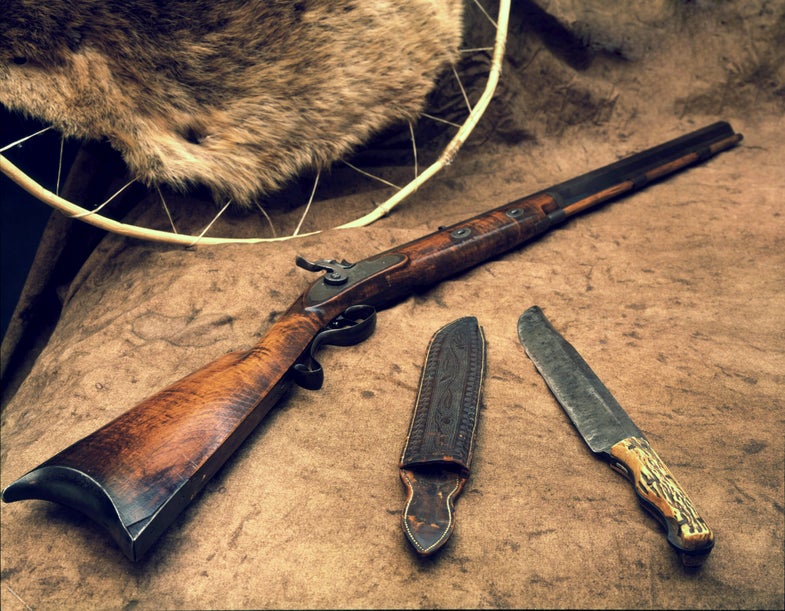 We’ve got a good one this week thanks to our friends at the Cody Firearms Museum: John Johnston’s Hawken and Bowie knife. John Johnston was the real historical figure the movie “Jeremiah Johnson” was based upon. The real Johns(t)on, we now learn, didn’t kill Crow or eat their livers. Or we don’t think so anyway. There are lots of stories about Johnston (sometimes spelled Johnson) and it’s hard to separate truth from myth. We know he was born John Garrison in Little York, New Jersey in 1824. He went to sea, then later enlisted in and deserted from the Navy during his service in the war with Mexico. At some point he went west, where he fought Indians with the Army, trapped, traded, mined and sold whiskey and was a deputy sheriff. Johnston was big, tough and had a violent temper. Legends grew up around him.

What we also know for sure is that this is Johnston’s Hawken rifle, as he was photographed holding it. The rifle is a .56 caliber marked “S Hawken.” Samuel Hawken was one of five gun-making Hawken brothers, although Samuel and his brother Jacob were the best known. At their shop in St. Louis they made the larger-caliber rifles the mountain men preferred. As the rifle is marked “S Hawken” only, it may have been made after Jacob’s death to cholera in 1849. The knife is a Wade & Butcher Bowie knife with ivory grips that was made in London. He had a different knife in the 1840s, the period in which the movie was set.

The rifle, as I mentioned, is part of the collection at the Cody Firearms Museum, itself part of the Buffalo Bill Center of the West, which everyone with an interest in frontier history should visit. Johnston, incidentally, is buried in Cody. He died in 1900 in a veteran’s home in southern California and was buried nearby. He was reinterred in the Old Town Cody cemetery in 1974, with Robert Redford serving as one of his pallbearers.