Blast From the Past: Remington Model 58 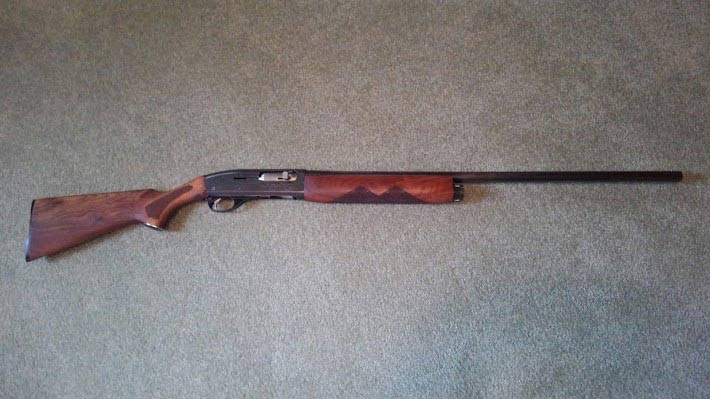 Today’s gun is a family heirloom and an impressive piece of home gunsmithing.

The Model 58 was Remington’s first gas-operated, semi-automatic shotgun. It featured a magazine cap that you turned to adjust the size of the gas ports to allow the appropriate amount of gas to cycle the action for light and heavy loads. Because the gun was introduced in 1956, when everything was “-A-Matic,” the feature was of course called “Dial-A-Matic” load control. The Model 58’s gas system was located inside the magazine tube, limiting its magazine capacity to two shells. It came in 12, 16, and 20 gauge and it contained many shared parts with the Remington 870.

Remington came out with the 878 in 1959. In place of the Dial-A-Matic magazine cap, it featured a Power Piston that handled 2 ¾-inch loads without adjustment. Both guns remained in the Remington lineup until 1963, when they—and the long-recoil 11-48—were all replaced by the 1100, which was a much more modern, durable design, especially when it came to holding up in clay target competition.

That’s not to say the Model 58 wasn’t a fine hunting gun. It was if you kept it clean and didn’t try to mix light and heavy loads.

I like your Blast From the Past articles and wanted to show you my father’s Remington Sportsman 58. I recovered the gun from his attic after he passed away in January 2018. The gun had suffered water damage after a tree broke through the roof during a storm years ago. The exterior of the barrel and receiver were badly rusted, and the finish on the wood was ruined. Even though I have never repaired a firearm before, I decided to try refurbishing this gun. I took it completely apart (I left the trigger group intact), carefully removed the rust, stripped and lightly sanded the stock and forearm, cold-blued the steel and treated the wood with Dutch Oil. I also installed a left-hand safety button. I just put it back together, and I am very pleased with how it turned out. The gun has a lot of nice details, with beautiful engraving on the sides of the receiver, lovely wood with checkering, and a small metal plate on the bottom of the stock grip that shows a bird dog with a duck in its mouth. The gun shoots well at the range, and I’m hoping to take some game with it this fall in memory of my father.

Keep the old gun pictures and stories coming to fsgunnuts@gmail.com.