Blast from the Past: The Sharpshooter “Fly Gun” 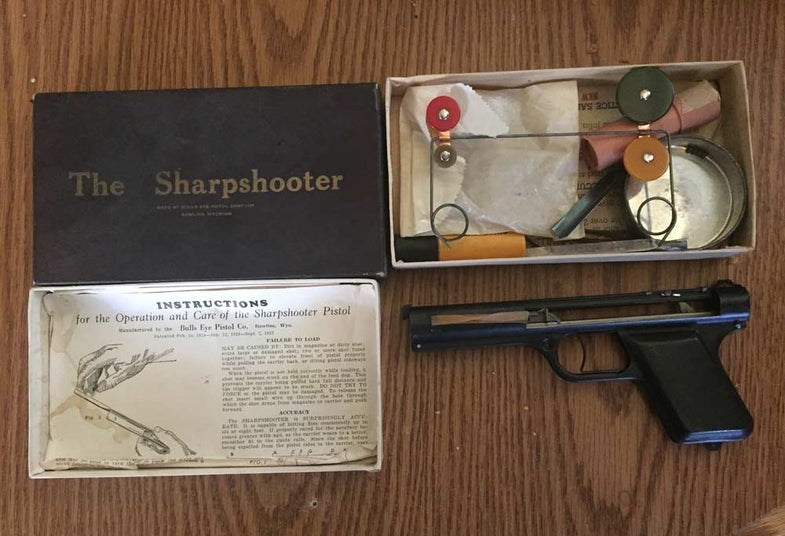 The Sharpshooter is the original fly-swatter gun. From Harold S.
SHARE

Today’s Blast from the Past goes to show there’s really nothing new out there. I am a big fan of the Bug-A-Salt 2.0 fly gun, which is essentially a spring-powered, salt-firing shotgun that is very effective on flies to the range of a couple of feet. And, while the Bug-A-Salt bills itself correctly as the “original salt gun,” it’s not the original fly gun. That honor goes to the “Bulls-Eye” pistol, and its replacement, the “Sharpshooter,” and we have a fine example of the latter today.

The gun was invented by a dentist and hunter, Dr. Claude Bunten, who invented a variety of gadgets, including a boat trailer for sportsmen. He received his first patent on the Bulls-Eye in 1924. He made the guns in his shop behind the dental building, often assisted by Capt. T.G. Brown, a former off-hand rifle champion. The two of them tested every pistol for accuracy before it left the shop. The Bulls-Eye was replaced by the smaller Sharpshooter in 1937. Bunten sold out after World War II, and the pistol was made by various owners into the 1970s.

This is undoubtedly a stretch for this blog, but I hope you’ll bear with me. This is The Sharpshooter fly gun. Looking at the patent dates and the font style of the instructions, I would say this was manufactured sometime in the late 1930s in Rawlins, Wyoming. It was given to me by a friend who I met while we were both living in Rawlins. He found it at a flea market in Seattle. The whole kit comprises two boxes: the first contains the gun itself with a set of instructions. The second box has some bakelite spinning targets, rubber bands, tubes of No. 6 shot and a device to load the shot into the gun. To fire this wicked weapon, you load some shot into the tubular magazine, affix the rubber band and pull back the carrier until the sear catches. One No. 6 shot will drop into the carrier. When the trigger is pulled, the rubber band flings the carrier forward, launching the single shot out of the gun. According to the instructions, “The SHARPSHOOTER is SUPRISINGLY ACCURATE. It is capable of hitting flies consistently up to six or eight feet.” Now I haven’t been able to achieve such accuracy, but when I figured out where it was hitting I killed a few by getting a foot or two from them. Amazingly, the rear sight is adjustable for windage and elevation. So, if you have some time, and flies to kill, and don’t mind littering your abode with lead shot, this is your gun of choice. A good flyswatter is more efficient, but what the heck, this gun is fun and harmless—even if you hit someone in the eye (supposedly).