Blast from the Past: Smith & Wesson Straight Line Target Pistol 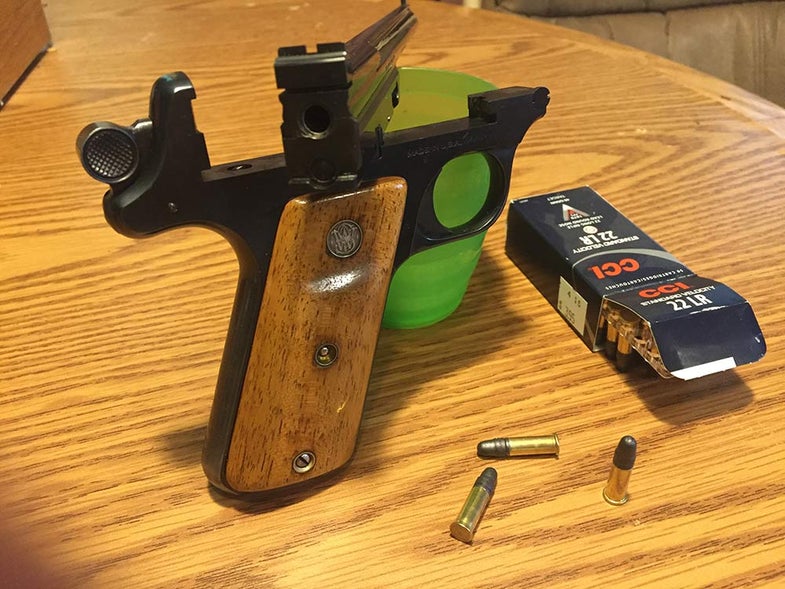 The Straight Line definitely had a unique design. From Harold S.
SHARE

The Smith & Wesson Straight Line Target Pistol replaced the very popular and successful Olympic Model single-shot target pistol in 1924. It was also known as the 4th Model, as it was the fourth version of S&W’s single-shot target pistols and quite a departure from the previous three. This pistol was new, it was unusual, and it turned out to be a classic example of fixing what wasn’t broke. Therefore, it was discontinued in 1936.

Not many were made, but fortunately for us, today’s Blast from the Past is one of them.

What, at first glance looks like a trim semi-auto pistol is really my Smith & Wesson Straight Line target pistol. Instead of making a top-break based on revolver frames, like the first three models, Smith & Wesson decided to do something innovative. In place of a hammer revolving around a pivot, this pistol has an in-line hand cocked striker. The designers thought that an in-line striker would eliminate the downward push on the barrel that comes from a pivoting hammer. Sales were good at first, but it was soon discovered that the new design had little advantage over the old design, and in 1929 the Depression began. Sales dropped off and only 1,870 were made.

To load this puppy, first pull the striker back to “half-cock,” then grab the stock with your right hand and the barrel with your left. Push the button on the left side to the right with your left thumb, then pivot the barrel counterclockwise. A spent case will then be extracted but not ejected. After plucking out the empty out, you reload and pivot the barrel back into battery. After pointing the pistol in a safe direction, pull the striker all the way back and you’re ready to fire. How does it shoot? Pretty good, but it’s a little light for a target pistol. Although this pistol was certainly not a financial success, the machine work and finish are out of this world. Fortunately, this one came as-is. If it had the metal case, paperwork, and tools, it would have cost an extra $1,000.

Thanks to Harold S for sharing this rare specimen. The rest of you, keep the old gun pictures coming to fsgunnuts@gmail.com.