Blast From the Past: Winchester Model 12 Heavy Duck

This week, it’s Phil’s turn to show off a vintage gun—and he’s got a great one 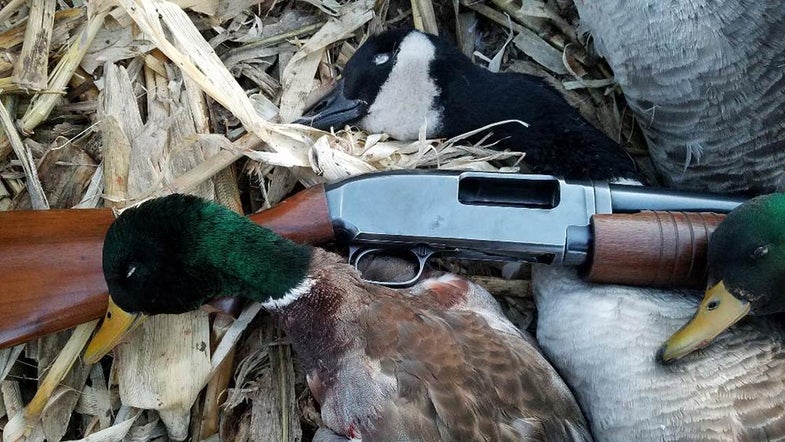 The result of the first four shots through the author’s 3-inch Model 12. Phil Bourjaily
SHARE

We’ve had Model 12 Winchesters in this space before, but this one, in my biased opinion, is the best yet, because it’s a 3-inch Heavy Duck version, and because it happens to be mine—therefore making it my favorite of the 2 million or so Model 12s out there. We’ve been through this before, but the Model 12 was introduced in 1912. Taking John Browning’s Model 97 hammer gun as his inspiration, Thomas Crossley Johnson came up with a beautifully trim hammerless pump gun. It was an immediate success, and around 2 million were made between 1912 and 1963, when it became too expensive to produce. The 3-inch Heavy Duck version debuted in 1935 to go with Winchester’s 1 5/8-ounce 3-inch magnum shells. It had a weighted stock and a steel magazine plug that brought its weight up to 8 ½ pounds or so. The gun was made up until the end in 1963, in both 30- and 32-inch barreled models, with both plain and solid ribs.

I was lucky enough to come across this gun this summer and wasted no time trading a couple of guns for it. It was made around 1960, and it has a plain, 30-inch Full-choke barrel. I will admit that I secretly wish it had a solid rib, but I am deliriously happy to finally own a Heavy Duck. Now that I have one, I’ve learned some things about them.

For instance, fun fact about Model 12s: The action bars, bolt release, and trigger are all connected, and when one of those parts wears, the bolt release becomes very difficult to push and refuses to pop out all the way to where it belongs. That’s how this one was, and it took new parts and gunsmithing to get the release working right.

Another fun fact: Not all 3-inch Model 12s have long enough ejection ports to shoot modern 3-inch ammo, as the old roll-crimped 3-inch paper shells were a little shorter than ours today. Therefore, some people call the Heavy Duck “the best 2 ¾-inch duck gun ever made.” Mine, fortunately, has so far cycled every 3-inch shell I’ve run through it, which includes bismuth and tungsten-matrix (steel is not recommended). The gun patterns very tightly.

A third fun fact: The safeties don’t reverse. My gunsmith also found a Winchester left-handed safety for it. It’s an original Winchester part, made for cold-weather operation. It’s huge. It looks like the sole of a boot, and it’s almost the same size as one. It adds practicality to an otherwise fairly impractical gun.

I had been waiting for the right time to get the gun into the field, and I finally decided last Wednesday was the day. I dug through my ammo supply and found a couple of 15-year old boxes of Federal Tungsten-Polymer 4s that I thought would work well as a combination duck-goose load. I set my layout blind and about 70 full bodies and silhouettes and a spinner in a cornfield not far from a half-frozen pond loaded with mallards and Canadas.

With 15 minutes of shooting time left, they all flew at once. One flock of geese worked the decoys, and I doubled when they swung low. I ran out, grabbed my birds, and as I came back, a flock of mallards began circling. I dropped the geese, jumped into the blind and shut the doors. A few seconds later, about 80 mallards came in for a landing, and I doubled on those.

Field dressing of the mallards revealed a lot of holes to eat around. The Winchester Full choke is a little tight for 15-yard ducks, so I’m thinking I’ll save this gun for late season geese, and who knows—maybe a spring turkey.

That’s my contribution to Blast From the Past, and I may make another sometime. But this feature is supposed to be about your guns, not mine, so keep the gun pictures coming to fsgunnuts@gmail.com.