Blasts from the Past: An A. Dickore Cape Gun 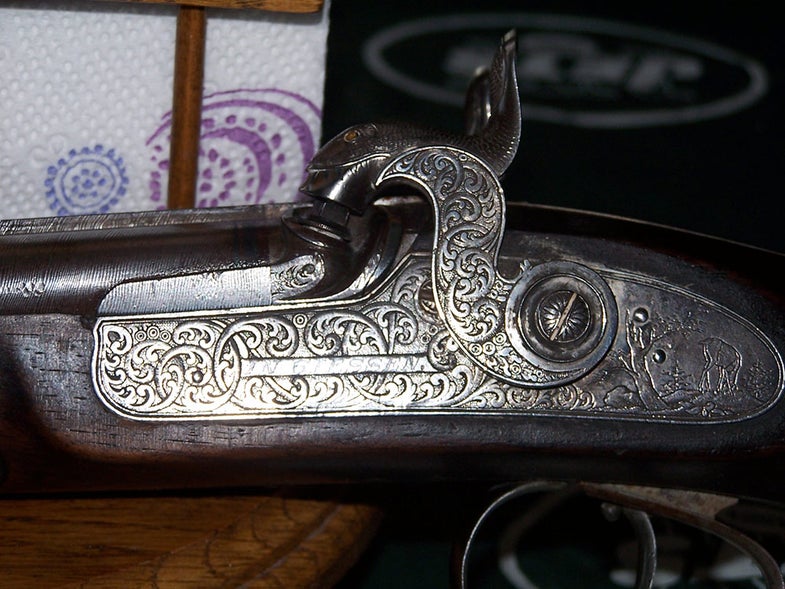 The hammers on this Cape gun are fish with golden eyes. From Gary
SHARE

It’s a privilege to see any gun that has been handed down through readers’ families, and that is definitely the case today. This is a Cape gun, named for its popularity in South Africa. Cape guns were also used in Europe and occasionally, as in the case of this gun, in North America. Cape guns have one smooth-bore barrel and one rifled barrel, making it suitable for taking any size game. Cape guns range from inexpensive, utilitarian models to high grade guns. This, obviously, is a nice one.

Thank you for that submission, Gary. A. Dickore was a gunmaker in Geissen, Germany. I found his name in a catalog entitled “Official Catalogue of the Great Works of Industry” printed in London in 1851. Apparently Dickore was active in 1844, and possibly earlier. Some Dickore guns, possibly later ones, are marked “Butzbach” in place of “Giessen.”

The engraving does look very Germanic, as does the stock design. From what I read, German and Austrian Cape guns (“buchsflinte”) had a smooth left barrel and a rifled right barrel, as this gun does. English guns were the other way around: they have a rifled left barrel and smooth right barrel. Why that is, and whether it has anything to do with why the English choose to drive their cars on the wrong side of the road is anyone’s guess. Keep the old gun pictures coming to fsgunnuts@gmail.com.