A Whole New Way to Fish

You have to watch this video of a guy possibly catching the first fish using a drone. You should watch... 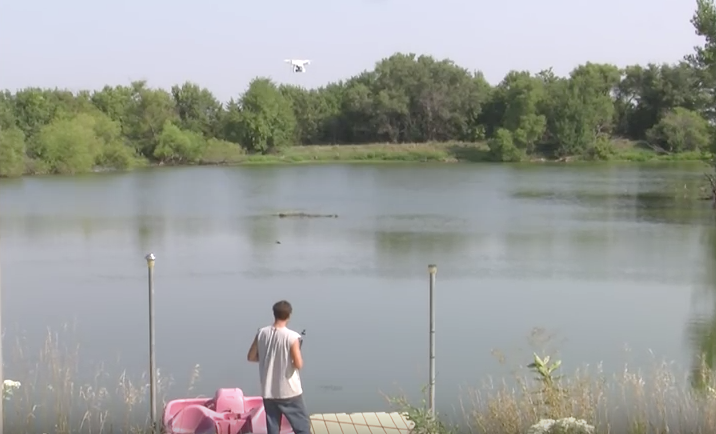 You have to watch this video of a guy possibly catching the first fish using a drone.

You should watch because it’s unbelievably cool. And, if you are over a certain age, because it will make you want to pound your head against the table. I don’t know about you, but when I’m doing that I like company.

The footage was shot by farmer Derek Klingenberg, who posts funny and satirical videos on YouTube and Facebook. You hear the drone, buzzing like a swarm of locusts, before you see it. Then the white aircraft flits through the frame, dangling 20 feet of fishing line with a bobber and baited hook. It lowers the rig into the farm pond in front of Klingenberg and hovers just a few feet from shore. He misses the first strike, but soon the bobber goes under again and the rising drone sets the hook on a little bluegill.

Next, we see the historic hookup replayed from the drone’s godlike point of view. It’s not unlike the stock footage you see of a rescue helicopter pulling someone from a flooded river or the ledge of a canyon wall. The drone lifts and delivers the wriggling fish back to its controller. Klingenberg hovers the aircraft so the still-wriggling fish hangs about head high. “Yes!” he exults to the stationary video camera. “My first drone fish! We gotta do a snap!” He pulls out his phone for a selfie, recording the event on the phone, which is of course also being recorded by the stationary video camera. Then we switch to the drone’s camera, which recorded the taking of the selfie.

So what you’ve got is three cameras, one drone, a guy practically spastic at the feat he has just pulled off, and one helpless and still hooked bluegill. The video stops after a minute and 31 seconds. The fish is still dangling when it ends. The fate of the fish is, of course, beside the point.

What is the point? Well, it sure ain’t about fishing. It must be about technology, the limitless possibilities afforded by the miraculous drone. (The more notable recent uses of these unmanned aircraft, incidentally, include harassing herds of bighorn sheep, ferrying drugs over borders, and—in the case of TV news stations wanting to get dramatic footage—preventing firefighting helicopters from approaching the scene of a wildfire to drop retardant due to the risk of chopper-drone collisions.)

It’s also about the three different cameras documenting the feat, driving home the unspoken message that the most important purpose of catching a fish with a drone may be so you can post the video on social media and become famous.

What’s utterly lost in all this is the quaint idea of connecting with the natural world. Increasingly, it seems, what technology does is stoke our desire for more, better, faster technology. The technological snake eating its own tail because, well, it can.

The idea that a drone enhances or facilitates our experience of nature is like saying that mittens enhance a concert pianist’s feel for the instrument’s keys.