GPS Is Making You Stupid

Long before there was GPS, there were stick charts. For thousands of years in the Marshall Islands, sailors successfully navigated... 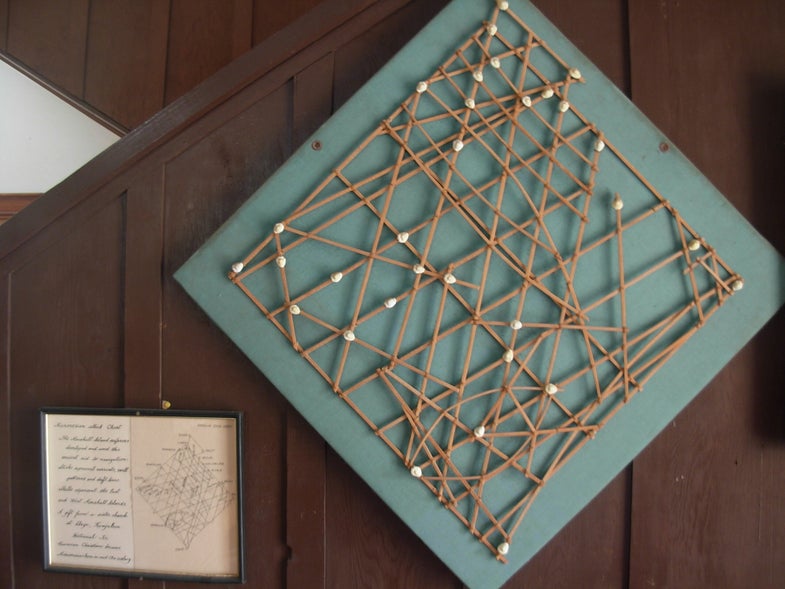 Long before there was GPS, there were stick charts.

For thousands of years in the Marshall Islands, sailors successfully navigated across thousands of miles across open ocean in stick canoes in ways that baffle the best scientific minds on earth. They did this by studying the effects of waves on islands that might be far over the horizon. If you knew what to look for, you could detect incredibly subtle changes in waves distant islands created—blocking swells, counterswells, the refraction of swells as they encountered undersea island slopes, and the bending of swells around islands as they ran into swells coming from the opposite direction. They would map these with “stick charts” that look like poorly executed dream catchers your child might bring home from summer camp. These were made of coconut frond ribs and twine, with cowry shells tied in that represented islands. A sailor didn’t take the stick map with him to sea. He memorized it and left it behind.

This knowledge was passed on by oral tradition, might take the better part of a lifetime to master, and has almost vanished from the earth, according to a recent article in The New York Times Magazine. A man who attained it was known as a ri-meto, a person of the sea. There are two such men left in the Marshalls. One is 71, the other 39.

Contrast that vanishing tradition with our growing one—a near-total reliance on GPS, which is making us stupider and less observant all the time.

Think about it. For thousands of years, our ancestors constantly constructed and refined mental maps of the world around them. They weren’t ri-metos, but they spent a lot of energy—much of it unconscious, researchers believe—orienting themselves in the landscape. Their lives depended on it. They noted the shape of a nearby hill or peak, a particular tree, that stretch of river choked with bushes whose berries made them sick.

The underlying assumption was so obvious: The world is very big and I am very small. To know where I am, I have to pay attention to the world’s cues. Again, this is anything but simple and it never stops.

If a person with this mindset makes a mistake and lives, he usually learns a great deal from it. He reviews what he did wrong, what misassumptions he made, and he studies how to correct and avoid such mistakes in the future. And this activity immerses him even more deeply and causes him to pay even greater attention to the world around him. It’s a self-reinforcing system of awareness.

GPS turns this upside down and inside out. GPS is what researchers refer to as an “egocentric” system. My phone or other device always puts me at the center of the world and tells me the way to my objective. If I move 100 feet forward, it reorients itself so I’m once again at the center and recalculates a new route. If I screw up, it doesn’t matter. I don’t have to reexamine and interpret what I did wrong. With somebody else doing the driving, I could navigate from a particular apple tree in Maryland to one in Oregon without ever looking outside the window, without ever looking away from the screen of my phone.

The study of what we’re losing from our reliance on GPS is still in its infancy. It involves more branches of science than I could name. But researchers are already documenting differences in the brains of those who use it and those—such as the members of vanishing primitive seafaring cultures—who don’t. Those changes take place in the hippocampus, a primitive part of the brain that is also where memories and stories reside.

John Huth, a physicist at Harvard and author of The Lost Art of Finding Our Way, thinks one thing is already painfully obvious. “You’re losing this chance to have a greater awareness of your environment,” Huth says “It’s almost like depriving yourself of music, or of a conversation with another person. There’s a richness that you’re missing out on.”

He’s right, of course. And then there’s the problem of what you do when you run out of batteries and every wave on the ocean looks the same.