Reasons to Be Afraid of Venomous Snakes

A timber rattlesnake, aka canebrake. I read somewhere that newborns, when shown an image of a snake, are three times... 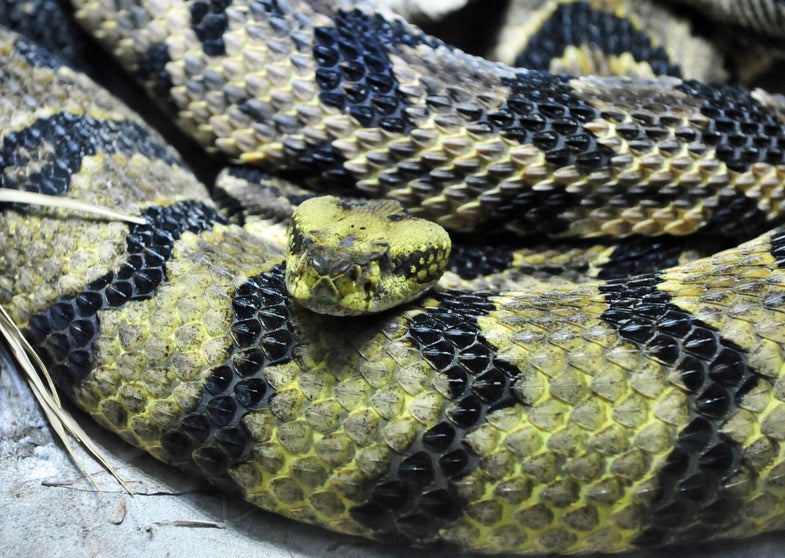 A timber rattlesnake, aka canebrake.

I read somewhere that newborns, when shown an image of a snake, are three times more likely to poop immediately than when shown a picture of a teddy bear. Gotta be some hardwiring in there. Me, I’m scared of snakes. I grew up in the ’burbs of D.C. We don’t get many there.

Snake venom is a nasty cocktail, even worse than Jägermeister and Kaluha. And we don’t even have the super-deadly snakes here in the U.S. What we have are about 20 venomous species—16 kinds of rattlers, 2 species of coral snakes, one species each of of cottonmouths and copperheads. The CDC estimates that between 7,000 and 8,000 people are bitten by venomous snakes each year, of whom about 5 die. That’s a pretty good save rate. Still, being bitten by one of these guys can ruin your whole day.

All of our dangerous snakes except the coral snake are pit vipers, of the Crotalidae family. Their venom, according to the Merck Veterinary Manual, is a mix of toxins that is hemotoxic, necrotizing, and anticoagulant. “Further, a neurotoxic component is present in the venom of some species, e.g., the Mojave rattlesnake.”

These are some pretty scary words. So I decided to look them up, which is not as straightforward as it might seem. Let me explain.

• Hemotoxic, for example, is defined as “a toxin, such as cobra venom, that causes a hemolytic reaction.” That doesn’t tell you a whole lot, so I looked up hemolytic.

• Hemolytic refers to “the breaking down of red blood cells with liberation of hemoglobin.” I know that blood is a good thing to have in your body, so when a significant part of it breaks down, that can’t be good.

• Anticoagulant was the only one I didn’t have to look up. It means your blood won’t clot, so you just keep bleeding. So now you have broken-down blood that won’t stay in your body. You have to assume that’s less than optimal.

• Necrotizing means “to cause necrosis in (a tissue, an organ, etc.).” Again, a great definition if you already know what the word means. Onward.

• Necrosis is where things get bad. The word refers to “death of a circumscribed portion of animal or plant tissue.” I’d like to keep all my portions—circumscribed and uncircumscribed—alive. The origin of the word is interesting. It first surfaced in the 1660s and derives from Greek nekrosis, “a becoming dead, state of death,” from nekroun, “make dead,” from nekros, “dead body.”

Dead body pretty much tells you what you need to know.

• Neurotoxins are “neurotoxic substances, as rattlesnake venom or the poison of a black widow spider.” Again, a great definition if you already know the definition. Also again, the example sentence is interesting. “Some difficulty in breathing can occur, especially if large amounts of neurotoxin are present in the venom.” —Natural History of Cottonmouth Moccasin, Agkistrodon piscivorus (Reptilia), by Ray D. Burkett

• Neurotoxic means “poisonous to nerve tissue, as to the brain or spinal cord.” This one had my favorite example sentence of all: “I have had the neurotoxic protein Botulinum injected into my forehead to minimize wrinkles.” —My Illegal, Flammable, Fabulous Hair Treatment, by Laura Bennett, July 9, 2009

The best blogs are the ones with a takeaway bit of infotainment. And there it is. If you want to minimize forehead wrinkles—at least on a temporary basis—a bite to your noggin from a venomous snake is one way to go.