Michelle took me to Harpers Ferry, W.V., for a couple of days for my birthday recently. We wade the rock... 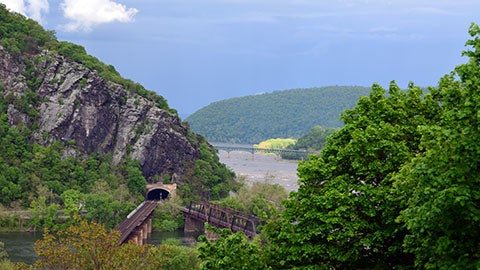 Michelle took me to Harpers Ferry, W.V., for a couple of days for my birthday recently. We wade the rock gardens there and fish for smallmouths. We go in the afternoon and stay until it’s almost dark and then go back to the B&B we stay in, The Ledge House. We’ve been going there for six years, long enough that the young owners don’t freak out when I build a wood fire in the fire ring, borrow the grill from the propane barbecue, and cook venison over the coals. (This year, having trouble getting the wood to catch, I threw on what must have been their Christmas tree. The thing exploded. The flames were 6 feet tall, heat such that I ran around pulling Adirondack chairs back before they caught, hoping all the while that nobody would call the fire department. It was way better than a birthday cake.)

Anyway, my fishing gear is so scattered these days that I had just grabbed a handful of plastic and hooks as we ran out the door. Once there, I realized that I didn’t have a single version of my go-to smallmouth lure—a 3-inch white twister tail. I grew up on this bait, fished it almost exclusively during my smallmouth apprenticeship on the Potomac, almost always on a ⅛-ounce jig. I believe in this lure. It didn’t feel right to be smallmouth fishing and not have one.

I had all kinds of other baits: three colors of crawfish, two kinds of creature baits with nine appendages and Don King hair, Senkos, tubes. “We’ve gotta go to the WalMart in Charles Town,” I told Michelle. She pointed to all the packets of plastic in my bag and asked if those weren’t enough. They weren’t, I explained. We had to go to Walmart. Which we did. But they hardly had any twister tails, much less white. Like me, Walmart had all kinds of plastic. Except the old-school kind. The world seems to have passed the single-tailed grub by. It’s no longer fashionable. The closest I could come was a pack of white double-tails. I figured these were better than nothing. Maybe I could bite one of the tails off.

At the water’s edge, I pulled one out and looked at it more closely. The tails weren’t natural extensions of the grub’s body. They were more like flimsy attachments. I bit off a tail and rigged it to evaluate its motion in the water. It looked wrong, like the grub was trying to detach a tail that didn’t belong to it but was following it anyway. I hung it up and switched to a Zoom Speed Craw in June Bug. Within minutes I’d nailed an 18-inch smallie that struck less than 15 feet from me as I finished a retrieve from faster water. I was trembling as I measured him. If I touch my thumbs together and spread my hands, it’s 18 ½ inches from little finger to little finger. He was just shy of that, the biggest smallmouth I’d caught in years. I lowered him back and he shot out of my hands. Amazing.

I got a few bites, but that was the only fish I landed that evening. As we got out of the water, I felt something underfoot. I looked down to see a 3-inch white twister tail on an ⅛-ounce jig on a rock. It had been there a while. It was faded and had little serrations along the edges of the tail, as if beaten up by the water. The jighead had once been purple. The hook was bent and the tail had slid most of the way down the shaft. I picked it up. It was the strangest feeling. Almost like finding an arrowhead. Someone else had once looked out over this water just as I’d done today and decided to tie on a 3-inch white twister tail.