The Genius of Jack Unruh

He sure didn’t act like a genius. He didn’t take up much space in a room, didn’t want to be... 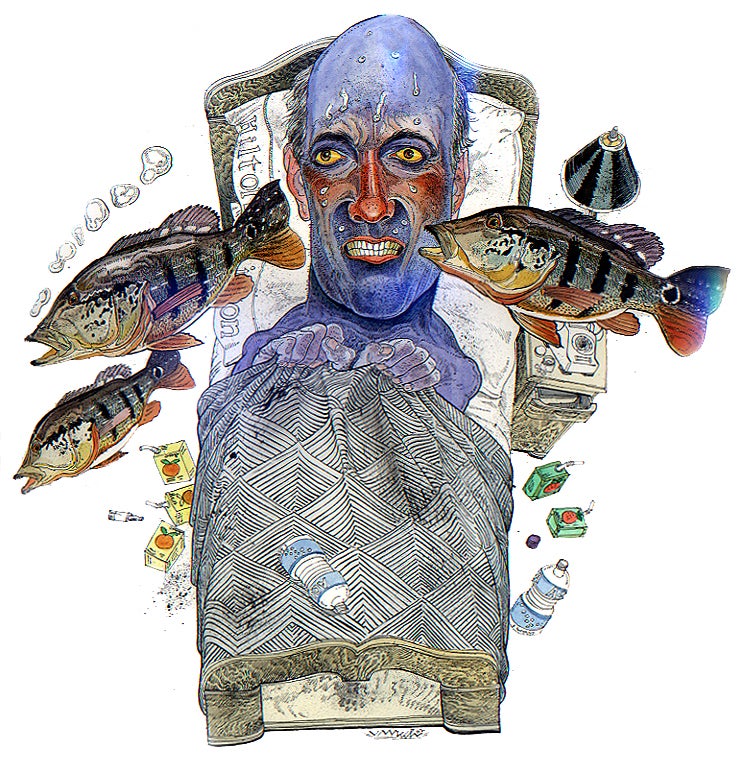 He sure didn’t act like a genius. He didn’t take up much space in a room, didn’t want to be the center of attention. What he loved were fish and flyfishing, birds and chasing upland game. And drawing. He loved to draw, would have “doodled” (his word) whether he got paid for it or not. But he did get paid for it. He drew for just about every magazine you can name, from National Geographic and Time to Entertainment Weekly and Rolling Stone. They sent him to France to draw the cave paintings at Lascaux and flew him in helicopters over the Exxon Valdez oil spill. They sent him to Chile to draw birds and to remote rivers of Alaska to draw fish. He did portraits of Bob Dylan and Winston Churchill, John F. Kennedy and B.B. King. He drew silverback gorillas wearing cowboy boots with spurs, and fish in raingear smoking pipes as they fished in the rain. He once drew me in a fever dream in a hotel bed in Brazil, sweat running down my purple face, with yellow eyeballs. Three peacock bass swam in a gentle arc around me. One of them was blowing bubbles.

Jack got old but his work stayed young. And it looked like nobody else’s. You could look at a picture and know in an instant whether it was Jack’s or not. That’s genius.

When I started writing a column for the back page of Field & Stream in 2003, they somehow got Jack to do the illustrations. We became close friends over the years, hunting and fishing in South Dakota, Texas, Wyoming, and West Virginia. He was 20 years my senior, but it never felt that way. What it felt like was that we recognized something in each other—some spark, some cockeyed way of viewing the world, some awareness of the divine absurdity of it. We treasured that in each other. That never got old either.

Jack Unruh died yesterday at his home in Dallas. The weekend before, knowing he was sick with cancer, I’d flown there to be with him. Doped up, unable to eat or keep anything down, Jack nevertheless wanted to work. He had my latest column and was hashing out an idea for the illustration. The backstory is too long to relate here, but he wanted to draw me wearing a bra and bending forward as I fumbled with the clasp in the back, looking at a nuclear mushroom cloud rising in the distance. That morning, I dutifully went to Walmart, bought a bra, and then modeled it in his kitchen as he snapped photos and cackled.

The situation was absurd, ridiculous, and demeaning to my dignity. Looking back, that seems appropriate. There we were, two professionals at the top of their game.

I miss you, Jack.