I hate the American lawn. It is a verdant, toxic illusion, an unnatural rug of green status. So how is... 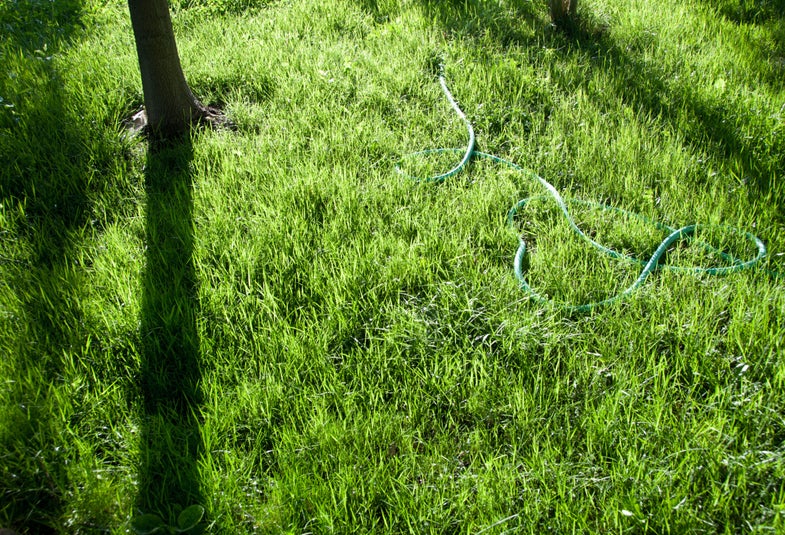 I hate the American lawn. It is a verdant, toxic illusion, an unnatural rug of green status.

So how is it that a guy like me suddenly becomes so obsessed with raising grass on a few square feet of earth that he forgets about the hamburgers on the grill and cooks them until they turn into stones?

I’m not entirely sure. But I’ll share the circumstances. We are selling our house, which we never should have bought. Too big, too expensive. Anyway, one of the guys we hired to make the place look better backed his trailer—repeatedly—over a section of The Lawn bordering the driveway. This will not do. If you are trying to sell a house, you want The Lawn to look good. It’s called “curb appeal.” Which is another stupid concept.

I roughed up the grassless dirt with a scratcher-thing, sowed “grow anywhere” grass seed, and watered it. Twice a day. And nothing happened. So I bought a “complete grass and fertilizer kit in a bag” deal and put that down. And watered it twice a day. And, behold, that didn’t work either. The sun baked the dirt and scorched the seed. Again I sowed seed, this time covering it with some weird synthetic landscaping fabric that I found in the garage. I weighted the fabric against the wind with many small stones. And, lo, tiny green blades of grass appeared. And I rejoiced. My heart was gladdened that I had brought forth life from the soil. After some days, I saw that the fabric should be removed to grant the grass more sun. By then, I was so focussed on this new life that when I put some burgers on the grill and went to water, I forgot about the burgers. When I put the hose away I realized that I’d been attending to the grass for 20 minutes. And the burgers were like unto stones, which displeased my family. So we ate at the place of the Golden Arches.

Tomorrow I leave for four days of turkey hunting in South Dakota, Kansas, and possibly Nebraska, depending on how many turkeys we kill in the first two states. I’m looking forward to the the trip. I will be hunting with guys who know acres more about turkeys than I ever will. It is the height of the spring turkey season. Which is to some men as November is to me. And what I’m chiefly worried about is this: Who will water my grass while I am gone? Who will care for this bit of lawn—which, as I have stated, I abhor—in my absence?

How does this come to be?

My only guess is that, like hunting or fishing, growing something is a way of being intimately connected to the natural world, to its power and mystery. To something greater than your self. This gives me new empathy for people who like to garden. To me, they are hunting. It’s just that they’re using a hose.