The Perils of a Ladder Stand

I have bought myself the mother of all padded-rail ladder stands. I have done this because I’m a lousy offhand... 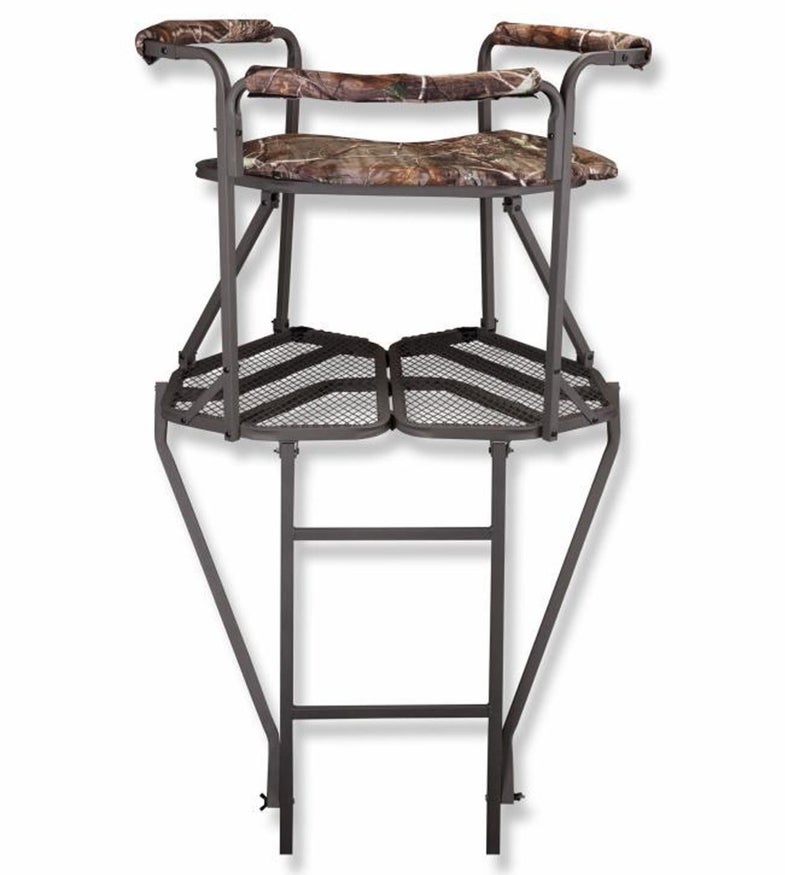 I have bought myself the mother of all padded-rail ladder stands. I have done this because I’m a lousy offhand shot and have never found a climber with a decent shooting rail. The rail is always in the front and the deer never come from the direction they’re supposed to. And what you owe to any animal is not a “well, I did the best I could under the circumstances” shot but a killing shot. For that, I need a rail.

I have solved this problem with a vengeance, because the Summit Crush Series Outlook ladder stand features padded shooting rails all around, about 270 degrees. I feel certain that a stand like this ensures that the deer will finally approach from the front, making me realize the rail on my climber would have been just fine.

It only took me about seven hours to set the stand up. I spent the first three assembling the seat platform in the living room while watching a football game. The platform is made of two six-sided metal pieces that you bolt together in the middle. This took about an hour because the flanges through which you put the nuts and bolts are so small that you don’t have room to use the 7/16-inch and 1/2-inch socket wrenches that you are instructed to use for the various screws. So I cursed a lot but was eventually able to make quarter-turns of the screws using only slotted wrenches.

I finally got the two halves to mate. Then there were about ten front and rear seat supports, arm rests, gun rests, and ladder supports. By the time I got the seat assembled, it was so big I could barely fit it through the doorway into the garage. It was an impressive hunk of steel, though. Michelle came home and said, “What is that thing? It looks like one of those cages they send people down to look at sharks in.” I beamed with pride. This is how a treestand seat should look. I have no idea why I thought this.

The instructions that come with ladder stands appear to be written for a parallel universe of good weather and perfect terrain where everyone is a lawyer.

You are instructed to practice “installing, adjusting and using your treestand at ground level prior to using it at elevated positions.” I tried several times to climb the ladder while it was standing upright in the driveway. Without anything to lean it against, however, I never made it past the first rung. So I gave up on practice setup.

You are never supposed to use the standing during “inclement” weather, “such as rain….” Seriously? This could severely limit my hunting. Lighting, I understand. A metal stand might not be the smartest place to be. But simple rain? Might have to overlook that one.

The seat cushion of my new stand is made of foam and, naturally, should not be left outdoors. This makes sense. Squirrels and other rodents love polyurethane and other kinds of foam, which must have some special nutrient or poison they crave. What makes less sense is this warning: “Never leave your treestand outdoors when it is not being used!” (That’s their exclamation point, by the way.) Seriously? Hauling that sucker inside every time I come down and go home? I may just have to roll the dice on that one.

It took me and my friend Patrick “Fidge” O’Neill the better part of two hours to get this stand up against a tree. Actually, it took Fidge most of two hours. I mostly handed him stuff.

Anyway, the stand is up, stable, and very comfortable. I have padded shooting rails all but surrounding me, which is a nice feeling. It’s rock solid. The idea of getting into my stand in 60 seconds rather than the 15 or so it takes me to use my climber is very seductive. I hope to hunt it soon. I just hope it’s okay to go up and down the ladder in the dark.