I increasingly believe that television—especially survival, fishing, or hunting television—is the tool of the devil. In exchange for money and... 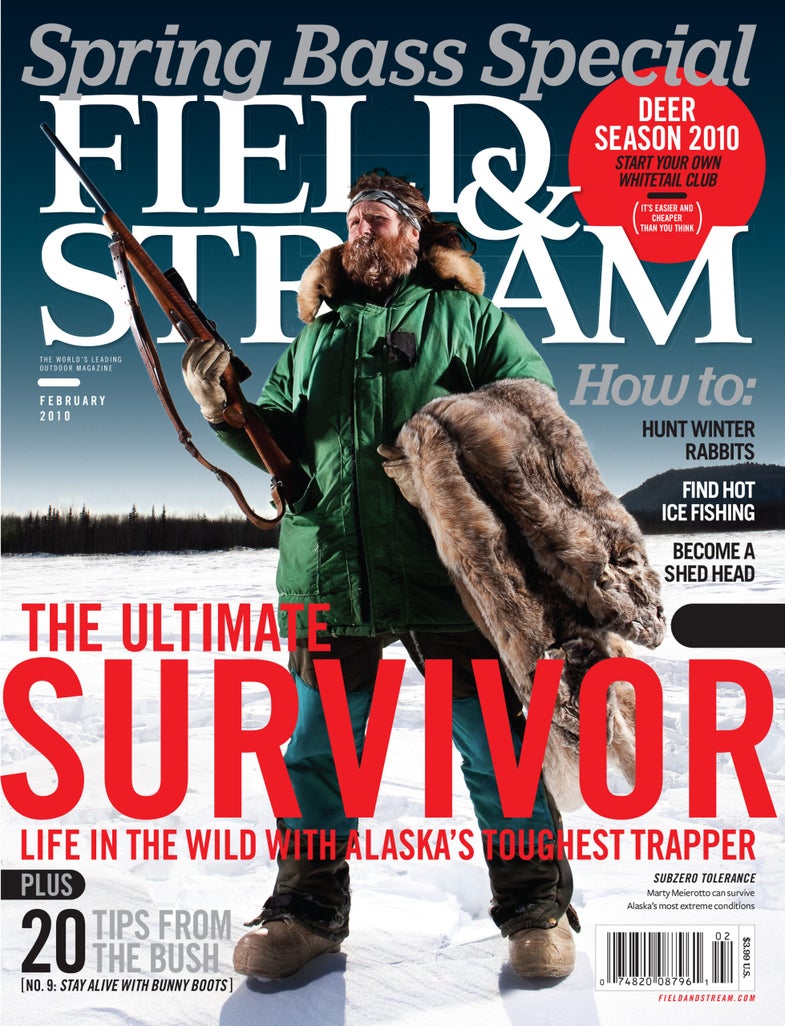 I increasingly believe that television—especially survival, fishing, or hunting television—is the tool of the devil. In exchange for money and fame, people willingly transform themselves into their own caricatures.

Back in a 2010 issue of Field & Stream, I did a profile of an Alaskan trapper, Marty Meierotto, who is now a mainstay of the History Channel’s Mountain Men. I’ve only watched the show a few times and never all the way through. It’s too painful. The Marty I met was down-to-earth, incredibly competent, and averse to drama. When you’re 150 miles into the bush, you do things slowly, deliberately, methodically. Drama is the last thing you want. Drama is what gets you killed. The Marty I saw on TV couldn’t stop talking about all the dangers he was facing as he flew his plane toward his trapping grounds. It’s a flight he has made hundreds of times without incident. In the flight sequence on TV, however, the mountains are a deadly obstacle, threatening to tear apart his small plane. Marty plays up the danger, saying how he has to fly so close to the walls of a valley, how it’s impossible to turn around, how the downdrafts could suck the plane right out of the sky. “I’m starting to get freaked out!” he declares just before we break for a commercial. The guy I met would never have freaked out. He would have calmly found a way to deal with any problem and then set about solving it.

I feel a tinge of guilt about all this. It’s possible that my story led the History Channel to Marty. I may have helped open the door. But Marty was the one who walked through it.

I stumbled across another show the other night, the Discovery Channel’s Dual Survival. The idea is to put two survival experts from different backgrounds—one a primitive-skills guy, the other an ex-special-forces guy—together in unknown environments and see how they get through the first 72 hours. I had been watching for about 15 minutes before I realized I recognized the primitive skills guy. He was Bill McConnell. He had been one of the head trackers at Tom Brown’s Tracker School when I went there more than a decade ago. Bill—who I’d known as Billy—later eft Brown’s school to found his own, PAST Skills, in Montana. I’d taken a course there, too, and spent hours talking with him about hunting and wilderness skills. He is an incredibly skilled guy who once killed a black bear at 3 or 4 yards with gear that he had made himself from scratch—the bow, arrows, arrowheads, fletching, glue he had made from the hooves of some critter, even the bowstring, which was twisted plant fiber. Dogbane, if I remember correctly. He was a low-key guy who didn’t take up a lot of space in a room.

The Billy I remember was one guy. The guy on TV was somebody else. To his credit, he was urging his partner, who was mission oriented and just wanted to cover ground, to slow down and think things through when they were walking in rocky country along a fast river. That fit the Billy I knew. But he had drunk the Kool-Aid. Every other minute, he would address the camera and cite all the dangers around them, playing up the fact that at any moment, the two might be overtaken by disaster. I lost count of the number of times he said, “This is where a small mistake gets you into big trouble,” as ominous music played louder and louder and then cut to another commercial.

I wonder if, in Billy or Marty’s place, I would I have the integrity to refuse to sell out, or if I would reach across the table for my cup of Kool-Aid. I guess I won’t know until it happens.