A few months back, Michelle came home with a pair of pants she’d bought at Goodwill. “They were camo and... 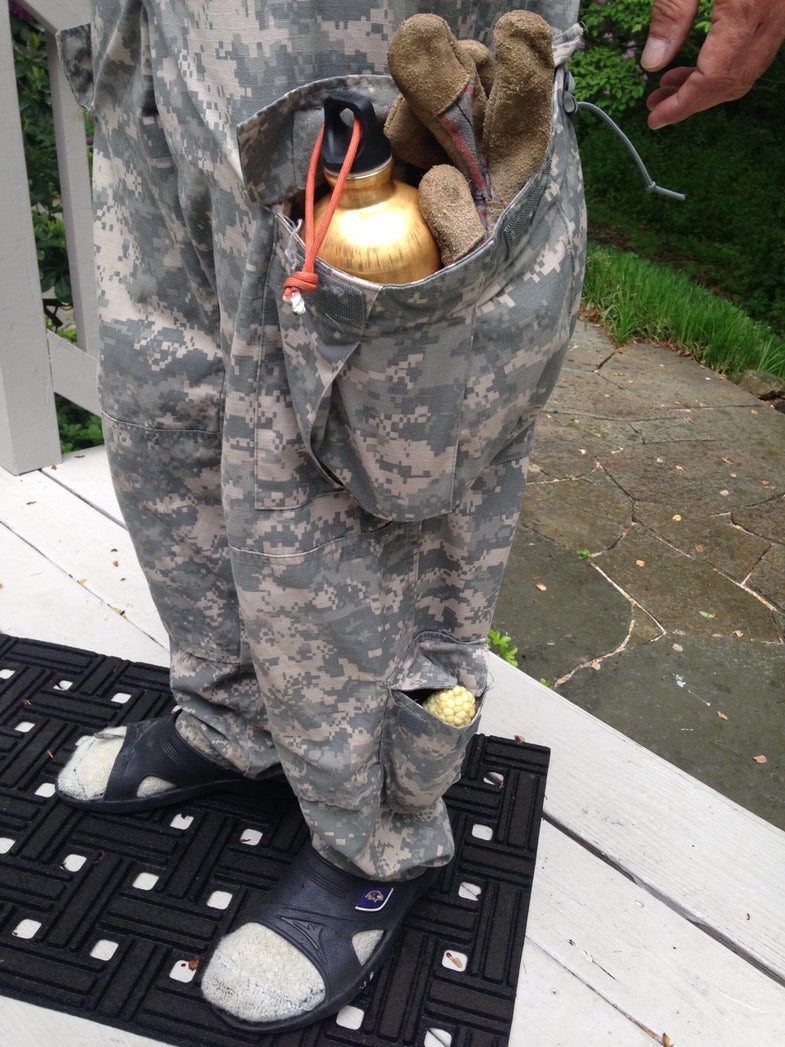 A few months back, Michelle came home with a pair of pants she’d bought at Goodwill. “They were camo and seemed sturdy,” she said. “I wasn’t sure they were your size, but they weren’t that expensive.” She said all this anxiously, as if she might have done something wrong. She handed me a pair of digital camo pants, inside which a tag read, “Trousers, Army Combat Uniform 50%/50% Nylon Cotton Ripstop Blend, Wind Resistant Poplin.” They were “Medium-Regular” size, according to another tag, accommodating waists from 31 inches to 35 inches, and inseams from 29½ inches to 32½ inches. Who but the Army could make one pair of pants with 4 inches of waist adjustment and 3 inches of inseam adjustment?

“Five bucks.” I got up and kissed her.

I did this because I’d recently spent an entire layover day in Anchorage, where I walked 15 miles trying to find a pair of precisely these pants. I’d seen them on a man named Phil Shoemaker, who has been a bear guide since 1983 and knows his apples. If he wears them, there’s a good reason.

They have quickly become my go-to pants, thrown into the bag on almost every trip I take. They’re not the ideal thing in extreme hot or cold, but they’re the most versatile, bullet-proof, and sensible trousers I’ve ever worn.

Just so you know, the Army Combat Uniform (ACU) debuted in 2004 as successor to the Battle Dress Uniform (BDU), which had been worn since the 1980s. They reportedly incorporate a number of design changes. I have no idea what those are. A lot of it has to do with camo patterns, most of which I think is b.s. anyway. But I digress.

Here’s what I love about these pants:

• The 50/50 nylon/cotton fabric. All-cotton pants breathe well and are comfy but last about as long as a roll of paper towels. Nylon lasts forever and dries quickly but is hot all by itself. And good luck if they get near a match. The blend, however, offers the best of both worlds. I have washed mine in motel sinks and dried them overnight by weighting them with boxes of ammo on the heat/ac unit. They wear like titanium. And if they caught on fire, you’d still have a fighting chance.

• Huge side, or thigh, storage pockets. Most “outdoor” pants feature these. Nearly all are pathetically small, more to look “tactical” than to be used. But these suckers will swallow—I’m not suggesting this is what you’d want to take afield but it gives you a sense of what you could bring—a 30-ounce bottle of dish detergent and roll of paper towels. Or a spare layer. Or three boxes of shells.

• Two calf storage pockets. I only recently discovered these. I wouldn’t recommend them for heavy stuff because anything you put in them functions like an ankle weight. But they’d be great for handwarmers, licenses, or—as you can see from the pictures—an ear of corn. Which you could either eat yourself or, where legal, use as bait.

• Style is at the bottom of my list of criteria for pants. But I do like what these pants have to say. To me, they tell the world, “I don’t care what the latest high-tech fabric is or whatever camo pattern is trending this week. Let’s get this show on the road.”