Let’s get back to some hard-core fishing. As some here know full well, there are lots of little things in... 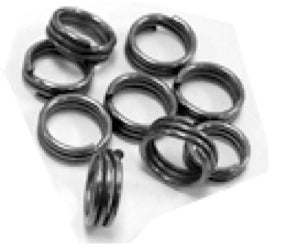 Let’s get back to some hard-core fishing. As some here know full well, there are lots of little things in fishing that mean a great deal–sharp hooks, good knots, and–yes–split rings. These are the little double coils of wire that hold the hooks on many lures. The following doesn’t happen too often, but it can happen. You hook an unusually big or strong fish, the split ring pulls apart, the fish gets away, and the air turns blue with words you never heard in Sunday school.

So I was talking with Terry Trattner a while back, who has a company called Wolverine Tackle out in Illinois. Wolverine makes so-called “super rings” that Trattner says are the strongest around. These split rings are made of three wire coils instead of two. I told Trattner that I thought he had a pretty good product, but that too few people knew about it. He of course allowed as how that was true. So here we are.

The Wolverine rings are available in both stainless-steel and black finishes and in four sizes. The newest and smallest size (#4) looks about right for most largemouth-bass lures. The muskie and striper guys would probably want to go a little bigger. The price is right around $1.30 for a 10-pack. Split rings are fairly easy to replace as long as you have a pair of split-ring pliers. Or use your thumbnail, which can get painful if you’re not careful. Anyway, stronger split rings seem to me like cheap insurance if big fish are in the offing….