I just got my hands on what’s easily the most unusual baitcasting reel I’ve ever seen. The new U.S. Reel... 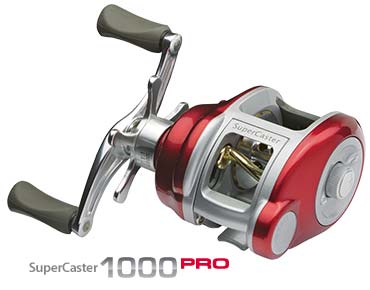 I just got my hands on what’s easily the most unusual baitcasting reel I’ve ever seen. The new U.S. Reel SuperCaster 1000 has no levelwind in the ordinary sense and also has a spool that runs backwards.

Instead of a worm-gear-driven level wind and eyelet, a shaped bar rocks back and forth like a see-saw as incoming line travels across it, and that see-saw motion works effectively to spread line across the spool as you crank. When you cast, the lack of a constricting eyelet means there’s less friction. Fred Kemp, U.S. Reel’s president and chief coffee-maker, tells me that’s why the new reel will cast farther and more easily than any comparable level-wind bass reel.

In casting and retrieving, line comes off the bottom of the spool instead of the top, which enables the line to travel across the see-saw bar. This feels a little odd but worked just fine in my front-yard casting tests. There are some other novel features as well, but more than I can list here. Click the on the above link to read more.

There are two models selling for $200 and $250 respectively. No, that ain’t cheap. But for the degree of innovation shown, I don’t think it’s bad, either. As a matter of interest, I once calculated the average reel price among all the baitcast reels listed in a recent Bass Pro Shops catalog to be about $140. So for better or worse, baitcast reels in general aren’t cheap, either….