Fishing: The Most Dangerous Sport in British Columbia’s Fraser Valley 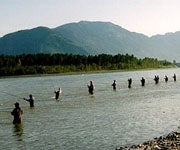 What’s the deadliest sport in British Columbia’s rugged Fraser Valley? Mountain climbing? Whitewater kayaking? BASE jumping? Laughing at large, burly Canadian men (and women) when they say “aboot” instead of “about”?

Nope. As it turns out, the most dangerous sport you can engage in is fishing.

From this story in the Vancouver Sun:
The most dangerous sport in the Fraser Valley doesn’t require participants to wear a helmet. You don’t need to sign a waiver. And there are no referees. Over the last three years, at least three people have died engaged in this popular local past-time. Despite that, the hundreds of people who take part in the sport continue to eschew basic safety equipment. This deadly sport is none other than fishing – a relaxing pursuit that over the past three years has taken the lives of brothers, husbands and fathers. On Aug. 11, a boat carrying three fishermen capsized near the Agassiz-Rosedale bridge. While two anglers made it to shore, a 49-year-old Agassiz fisherman is still missing. The likelihood of finding the man alive is “next to zero,” Kent-Harrison Search and Rescue Neil Brewer said Tuesday.

According to the story, most anglers who fish the Fraser don’t think about wearing PFDs on the river, until, of course, it’s too late. In addition to the missing boat angler, the story says several wading anglers have also drowned while fishing. It brings up an interesting point: Most of us will (or at least should) wear a PFD while in a boat in moving water, but do you wear a PFD when you’re wading a river?