Photo via Olathe Police Department/Facebook Earlier this month, when school resource officer Jamie Schmidt responded to a call about dead... 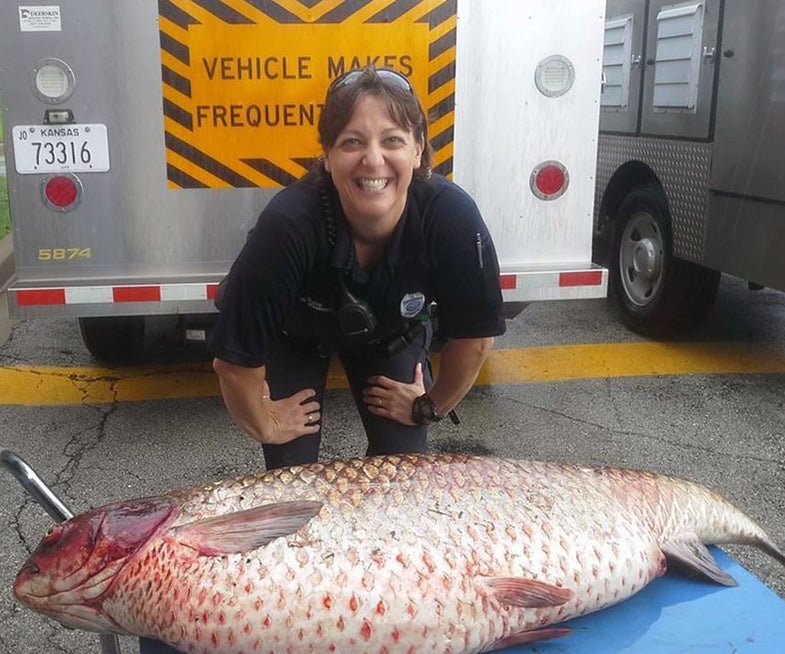 Earlier this month, when school resource officer Jamie Schmidt responded to a call about dead fish stuck in a Kansas City suburb drainage ditch, she thought the man who had called it in had exaggerated about its size. However, once at the scene, she realized it wasn’t a tall tale at all, and she had to figure out a way to move the 3½ foot long, 60-pound grass carp.

“I was in disbelief when he told me it was 4 feet,” said Schmidt, of the Olathe Police Department. “I know how men like to tell fish stories. I was sure it would be a lot smaller, [but] that is a pretty big fish.”

Schmidt told the Kansas City Star that the fish likely got caught in the outgoing currents of the nearby Persimmon Hill Lake, which overflowed after recent heavy rains. The man who filed the report said he spotted the fish, which likely became stranded when the water receded, while on a walk.

Though the state occasionally stocks Persimmon Hill Lake, Schmidt said that she wasn’t aware such a big carp could live in those waters. It’s hard to guess what the fish would’ve weighed when it was alive, but it likely would have been just shy of the Kansas state grass carp record of 77.75 pounds.

“I didn’t realize my summer would be this interesting,” said Schmidt, who is filling in as an animal control officer while another officer is on maternity leave.