At airports across the country, using peregrine falcons to keep gulls and geese away from runways is gaining in popularity.... 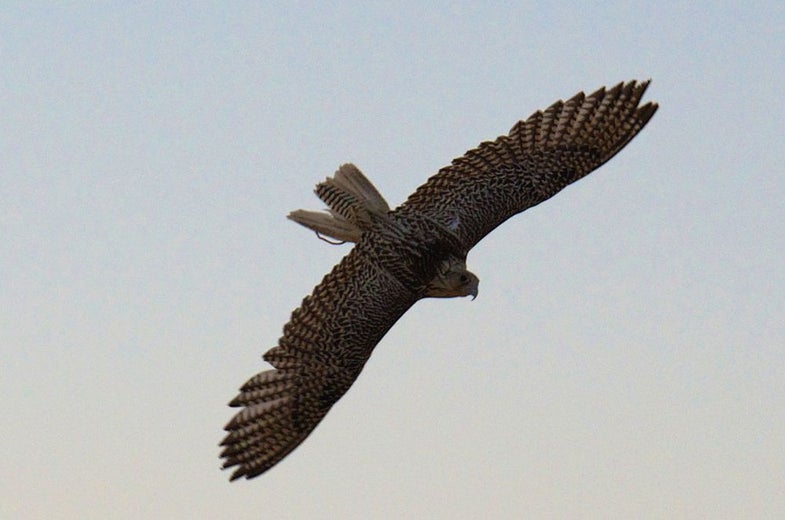 Falcons are being used by airports as an attempt to scare other birds away to avoid wildlife strikes. .
SHARE

At airports across the country, using peregrine falcons to keep gulls and geese away from runways is gaining in popularity.

The FAA reports a 42 percent increase in wildlife collisions with planes from 2009 to 2013. According to City Lab, falcons help reduce these run-ins, which can force planes to make emergency landings, by shooing other birds away from airport runways.

A new short documentary called “The Ancient Art of Keeping Birds at Bay” tracks the rise of this new trend. “Falcons are the great white shark of the sky,” says Mark Adam, president of Falcon Environmental Services, which specializes in using the birds to protect planes. “Birds are terrified of them.”

The avian predators are trained for 30 to 60 days before they are let fly at airports. After a falcon does its duty, a handler calls it back by swinging bait overhead, a traditional method in falconry training.

In an effort to keep runways free of birds, however, some airports have turned to technological deterrents, such as the Robird, a robotic falcon that will start flying over a small Germany airport next year. The mechanical peregrine drone is designed to scare birds just like a live falcon would and is controlled remotely by an operator on the ground.

See “The Ancient Art of Keeping Birds at Bay” below.