Photo via Facebook While fishing Florida’s Indian River earlier this month, angler Luke Ledbetter, of Alabama, hooked a fish that... 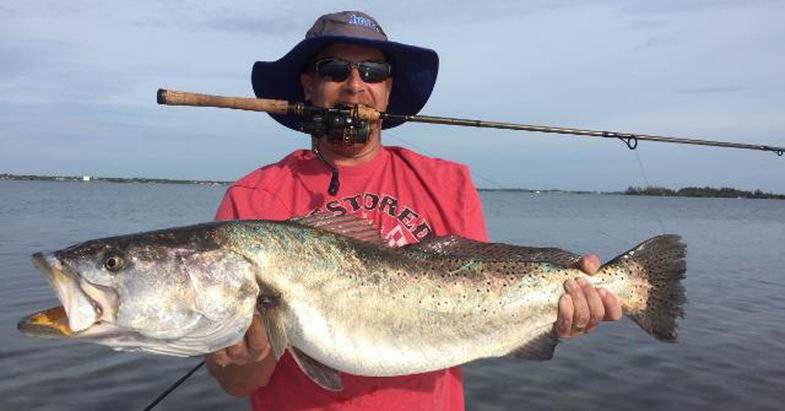 While fishing Florida’s Indian River earlier this month, angler Luke Ledbetter, of Alabama, hooked a fish that quickly proceeded to peel line from his reel. At first, Ledbetter thought it was a big redfish or a snook, but, when he finally subdued his catch, he discovered that it was a nearly three-foot-long seatrout, big enough to claim the International Game Fish Association’s (IGFA) all-tackle length record.

As Florida Today reports, Ledbetter’s companion that day, Captain Peter Deeks, of Merritt Island, knows a trophy catch when he sees one, but, when Ledbetter’s fish created wakes in the water, he had no idea what was on the other end—he just knew it was big.

“Every so often we’ll catch a fish that really impresses me, and this one did,” said Deeks, who runs Native Sons Fishing Guides. “The girth on this one was just incredible.”

Though Ledbetter and Deeks kept the fish out of the water for a moment for measuring and photographing, they took great care in releasing it safely. The fish measured 34.25 inches long, and the men estimate it weighed 14 pounds. Fortunately for Ledbetter, the IGFA now maintains separate record categories for fish length. In the past, anglers needed to weigh a record catch on a certified scale, a process that often resulted in the fish’s death. Since the new records are based solely on length, an angler can measure and release a record fish unharmed. If the IGFA approves Ledbetter’s fish as the new record, it will beat the previous record by 8 centimeters.

“We weren’t even supposed to go fishing that day,” said Ledbetter, an ordained minister. “We were in town to take our kids to Disney, and Peter had a cancelation. God allowed us to go on that trip, and it wasn’t by chance we got on a boat with a man named Peter.”

While Deeks was reluctant to divulge the exact location where Ledbetter caught his potential-record fish, he did say it was between Fort Pierce and Melbourne Beach.