Idaho fly angler Cyndle Clift has quite the tale on her hands. In March, she hooked a 8- to 10-pound,... 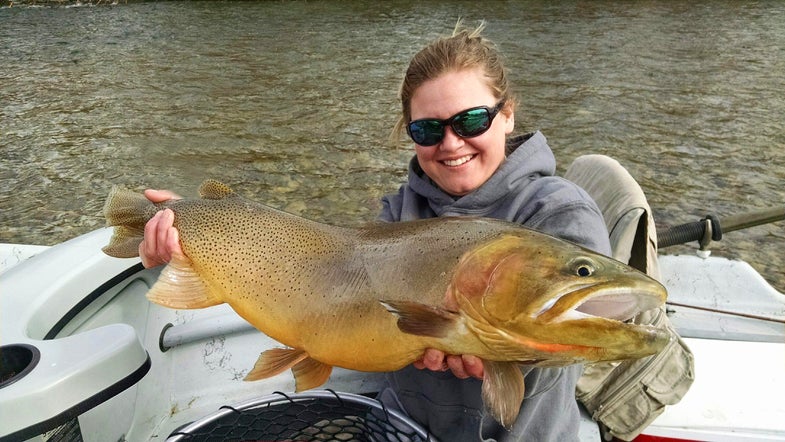 Idaho fly angler Cyndle Clift has quite the tale on her hands. In March, she hooked a 8- to 10-pound, roughly 28-inch Yellowstone cutthroat on the South Fork of the Snake River. But she nearly lost it before she could wrangle it in the boat. “We were coming up on some logs,” Clift says. “We were worried [the trout] would break us off in the log jam, so we pulled it in in less than 5 minutes. But I don’t really know exactly how long it took; I probably blacked out a little bit from surprise.”

Clift caught the cuttie, her only fish of the day, on a streamer in a deep hole, then snapped photos and released it. Yellowstone cutthroat trout commonly weigh 2 to 3 pounds; 4- and 5-pounders are considered big. Since Clift’s fish is twice the size of a typical Yellowstone cutthroat, naysayers have begun questioning if the fish is actually a brown trout, not a cutthroat. Idaho Department of Fish and Game biologists say, however, that they believe it is indeed a cutthroat, based on the orange coloring around its mouth, consistent with cutthroat markings.

“There’s occasionally some really big cutthroat down there,” says Dan Garren, IDFG regional fisheries manager. “When fish get that big, they’re probably eating a lot of smaller fish and getting a lot of nutrients into their body.”

On the South Fork, you can keep all the non-native rainbows you want—but cutthroats must be released, which is why Clift released her haul. IDFG started a state-record program for catch-and-release fish in January, but Clift didn’t know about it—she has no pictures of the fish next to measuring tape, so no record. “Maybe someone else will have the opportunity to catch it,” Clift says. “But if it had been part rainbow, I would have kept it, and it would have been mounted on my wall.”