Bluetongue Claims Hundreds of Deer in Washington and Idaho

Photograph courtesy of Harvey Barrison/Flickr Researchers in Washington and Idaho have confirmed that the viral disease known as the bluetongue... 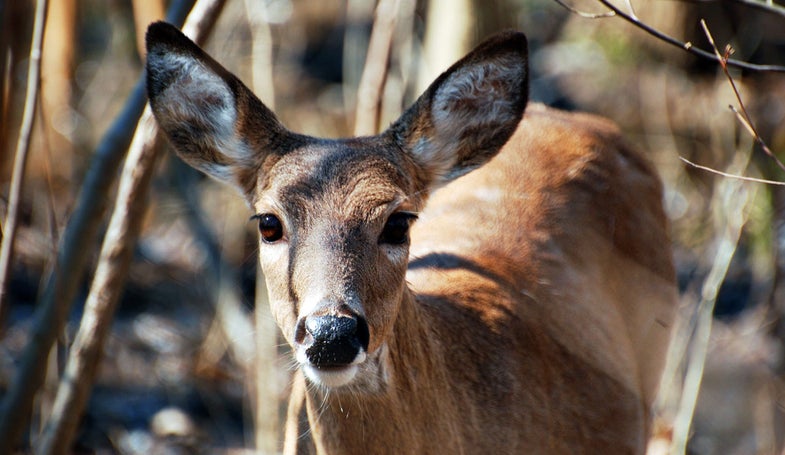 Researchers in Washington and Idaho have confirmed that the viral disease known as the bluetongue has claimed hundreds of deer in the states so far this year, as the Associated Press reports.

The Salt Lake Tribune notes that cases of bluetongue among whitetail deer have been confirmed in twelve counties—eight in eastern Washington, four in Idaho. Likewise, researchers have found the disease among mule deer and in one bighorn sheep. According to Immortal.org, the city of Colville, W.A., has been hit especially hard, with 68 dead whitetails collected from the area.

Fatality is between 80 and 90 percent for deer that contract bluetongue. The virus is often transmitted by gnats that flourish in conditions such as the current unseasonably warm, dry weather in the region—a direct result of ongoing drought, on which biologists blame the outbreak. As Washington State University notes, the symptoms of bluetongue include fever, respiratory difficulties, swelling of the body, and, in extreme cases, blue coloration of the lips and tongue, from poor oxygen circulation, in addition to others side effects. The virus, however, cannot be passed among deer.

“We’re finding dead whitetails just about any place the deer get around mud, which is where the gnats are produced,” says Michael Atamian, a biologist with the Washington Department of Fish and Wildlife.

Fortunately, infected animals cannot transmit the disease to humans either, but WDFW recommends that no one hunt—or eat—animals that appear ill. For now, biologists with the Idaho Department of Fish and Game and WDFW are concerned that the virus will continue spreading until the first hard frost kills the gnats. Until then, the discovery of more dead and infected deer is likely.