File photograph courtesy of the Bureau of Land Management/Flickr Finding a dead horse with puncture wounds in an area where... 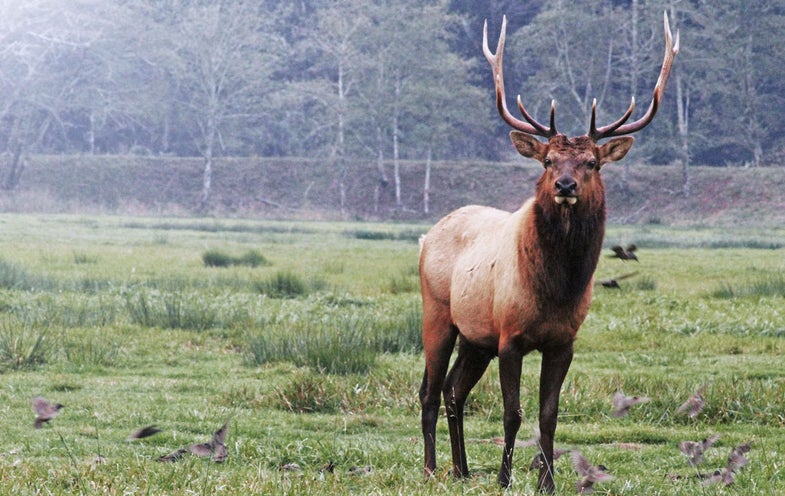 File photograph courtesy of the Bureau of Land Management/Flickr

Finding a dead horse with puncture wounds in an area where wolves are known to roam might seem like an open and shut case. As The East Oregonian reports, however, a dead horse found in a pasture in Wallowa County, Oregon, was not killed by predatory canines but by an elk. A bull, hopped up on testosterone, felled the unlucky horse, according to biologist Mike Hansen, with the Oregon Department Fish and Wildlife. “It is breeding season for elk,” said Hansen. “Bulls are very aggressive this time of year.”

Michelle Dennehy, ODFW wildlife communication coordinator, said elk are not the usual suspects in livestock killings, but noted that such incidents are not unheard of. “Elk do occasionally kill horses, and we are coming close to their rut season,” said Dennehy. “Getting too close to a bull elk during the breeding season can be very dangerous.”

The dead 12-year-old gelding was discovered by elk hunters on the Grouse Creek Ranch. ODFW officials investigated the kill the day it was reported and found no evidence of a wolf attack, such as tracks or bites on the carcass. Likewise, officials said that scratches and scrapes on the horse’s side matched the spacing and size of elk antlers. Officials determined the cause of death to be internal bleeding from being gored, though there was also a deep pucture wound near the horse’​s groin.

Area rancher Eric Porter, however, disagreed with the ruling and believes that wolves are the obvious killers. “All the evidence was there, but they wouldn’t confirm it,” he said. Porter has previously disagreed with ODFW claims about livestock killings. He lost a calf to predation last spring in an area where a wolf was documented. But ODFW officials said bite-mark analysis proved coyotes were most likely responsible for the death of Porter’s calf​, categorizing it only as a “probable” wolf attack.

Todd Nash, a rancher with the Oregon Cattlemen’s Association, said that proving wolves are guilty of such killings has become increasingly difficult, and that frustration among area ranchers is growing. Porter said pinning the death on elk was based on flimsy evidence. “I can sympathize with not finding wolf tracks,” said Nash. “But because you find elk tracks in the area, that’s what you come up with? It’s crazy. There was a blood trail caused by the horse being carried away 15 or 20 feet, and there were other puncture wounds on the horse that are consistent with wolf wounds. They have a mindset that it could have been anything but a wolf attack​.”​

Roblyn Brown, with ODFW, counters rancher claims by referencing an incident years ago in which a spike bull attacked and killed a heifer, and that standard procedure leads to ODFW conclusions​. “All we can do is follow our investigation protocol,” Brown said.​ The U.S. Department of Agriculture Wildlife Services​ ​supports the ODFW conclusion that an elk was responsible for the kill.

Wolves in the region of Oregon where the horse was killed are listed as endangered species. Officials grant permission to kill wolves only under limited circumstances, as outlined in the state’s wolf-management plan.

The Horse reports that Oregon Cattlemen’s Association could appeal the ODFW decision, but Nash said that no appeal is planned.