Coyote Carried Six Miles Wedged in the Grill of SUV

Whether you love or hate coyotes, you have to admit they’re survivors. In Illinois last week, one ‘yote was hit... 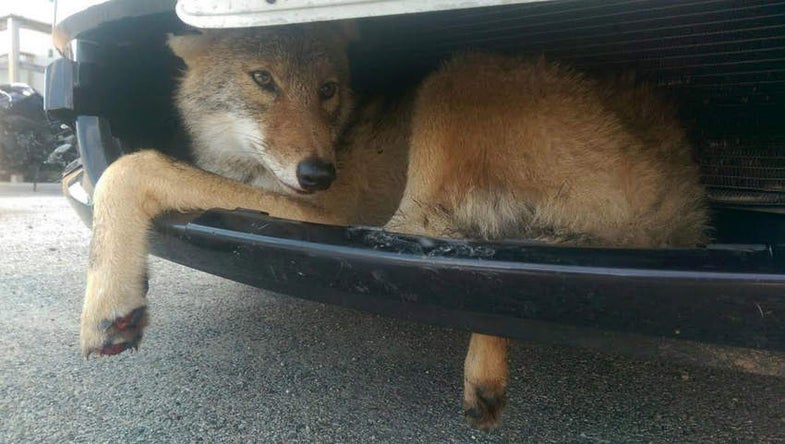 Whether you love or hate coyotes, you have to admit they’re survivors. In Illinois last week, one ‘yote was hit by a car and carried six miles wedged in the vehicle’s bumper. The animal suffered three fractured legs, but is expected to make a full recovery at a local wildlife rehabilitation center.

According to the Lake County News-Sun, the driver, Mark Armour, was on his way to work at the Waukegan train station when he thought he hit something with his SUV. Unable to see anything in the road that he might have struck, Armour continued on to the station parking lot, where commuters noticed the animal stuck under the grill of his Buick Verano.

Amber Manley, an animal control officer with the Waukegan police, responded to the call and freed the coyote from the vehicle’s grill. She said she was stunned that the animal fit into the space and was able to survive the collision. The coyote was taken to Flint Creek Wildlife Rehabilitation, where it was given antibiotics and its leg fractures were set. Rehab staff hope to release the ‘yote, which Armour has nicknamed Vern, back into the wild early next year.