Photograph courtesy of Wikimedia Commons/ForestWander The Economist reports that in the relative absence of mountain lions and Eastern wolves, a... 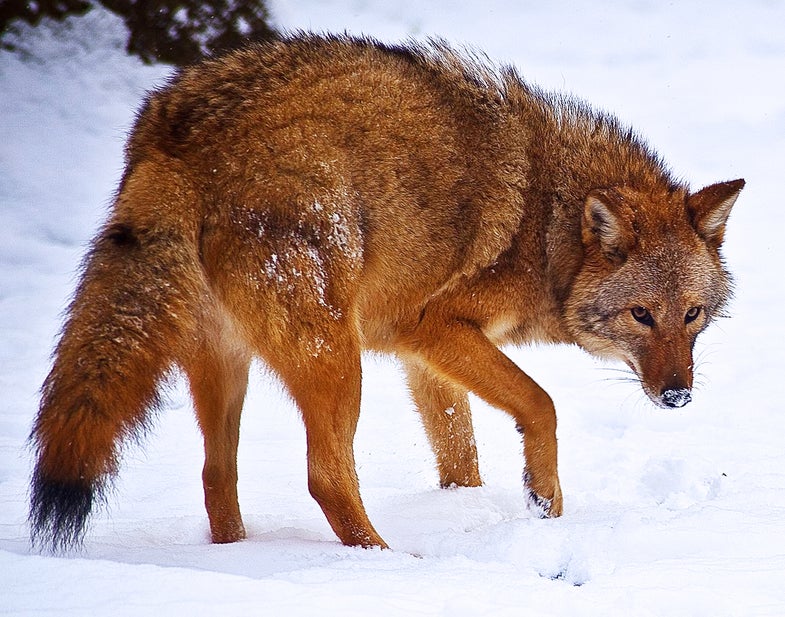 The Economist reports that in the relative absence of mountain lions and Eastern wolves, a new breed of canine, known as the coywolf (commonly called the Eastern coyote) has established itself as the apex predator of the Northeast. According to Coywolf.org, biologists believe this new creature first appeared 50 to 70 years ago. The species is the result of Eastern wolves (a smaller species of wolf more closely related to coyotes than to the timber wolves of western North America) interbreeding with coyotes and large domestic dogs. Roland Kays of North Carolina State University believes that there are now more than a million of the adaptive, urban-savvy canids in the Northeast. “[This is an] amazing contemporary evolution story that’s happening right underneath our nose,” said Dr. Kays.

Javier Monzón’s work at Stony Brook University, in New York State, showed that coyote DNA comprises 65 percent of the average coywolf’s genetic material, while wolf DNA represents 25 percent, and the remaining 10 percent is dog. It appears that the coywolf inherited the best traits from all three lineages. The incredible adaptability of the Western coyote, coupled with the large size and strong jaw muscles of wolves, enable the coywolf to be an extremely effective deer predator. Likewise, researchers believe that the inclusion of dog DNA has enabled the coywolf to be more comfortable in urban settings than wolves or coyotes normally would. Known coywolf populations exist in several Northeastern metropolitan areas, including Boston and New York City.

Coywolves are known to eat fruits, vegetables, rodents, deer, cats, and the occasional dog. Their flexible diets mean that coywolves can survive in a relatively small territory while remaining under the radar.

The science behind whether to label the coywolf a new species is still debated, but “species” is a human concept, and whether it qualifies or not has no bearing on the animal’s success. It appears that the coywolf is here to stay no matter what it’s labeled.