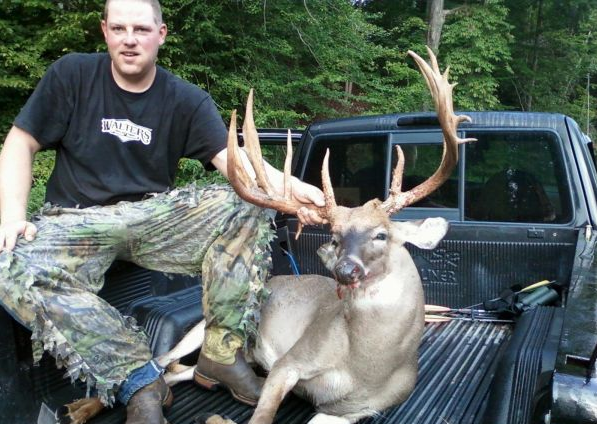 He’d been monitoring the big nontypical—and its smaller companion, a 6-pointer—for a while, but when the season opened he didn’t have the right wind to make a move.

“I hunted Monday and saw him twice. He came into the beans and bedded down in the middle of it with the 6-pointer,” said Davis. “He’d get up and leave and come back—I guess he was going to get water and coming back to his bed. I saw him two times on Monday, Tuesday, and Wednesday, but I had a bad wind, a north wind, that was blowing wrong. He’d get up every day and walk away.”

On Thursday, Davis finally got the wind he was looking for. He got to his stand before first light, and not long after, the two bucks came in to his bait pile. He killed the massive nontypical cleanly with a broadside shot from a Horton crossbow at less than 40 yards.

The buck has a main-frame 10-point rack with nine different sticker points. It has an inside spread of just under 20 inches, and its longest tine is almost 14 inches. According to North Carolina Sportsman, previously the largest nontypical deer ever taken by a bowhunter in North Carolina was a 176 7/8-inch buck in 2005.