Lifelong angler Barbara Pope reunited with two friends from her sorority days at Oklahoma State University during the first week... 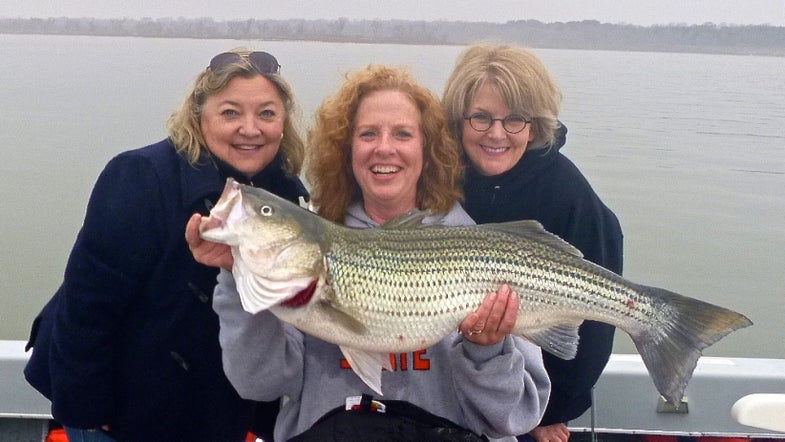 Lifelong angler Barbara Pope reunited with two friends from her sorority days at Oklahoma State University during the first week of December for a bass fishing outing on Lake Texoma. While they probably relived some old times, Pope ensured that the women would be talking about this trip for years to come, when she reeled in a 29-pound striped bass that crushed the previous record for the Oklahoma side of the lake by 6 pounds.

The women and their guide, Chris Carey with Striper Express Guide Service, were drift fishing with artificial bait near the northern shore in water 15 to 40 feet deep, according to Women’s Outdoor News. Around noon, Pope made a cast over a submerged point on the main lake, when the 38-inch striper hit. “I was leaning back and the rod was bent so far it looked to break at any time,” she said. “I knew this was a special fish by the excitement in Chris’s voice. When it surfaced, everyone went crazy!”

Heavier bass have been caught on the Texas side of the lake, but this catch has been confirmed as the largest striped bass from the Oklahoma side since the state’s Department of Wildlife Conservation starting keeping records in 2008.