When Bill McWha moved to Wakefield, RI, he expected to deliver packages for UPS. Instead, he found himself transporting tens... 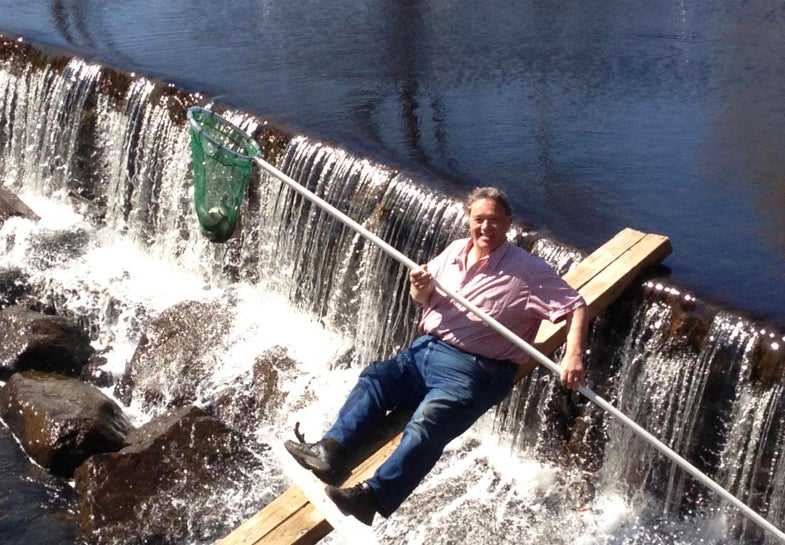 When Bill McWha moved to Wakefield, RI, he expected to deliver packages for UPS. Instead, he found himself transporting tens of thousands of river herring en route to their spawning grounds on the Saugatucket River. According to National Geographic, McWha first visited the river in 2010 and saw thousands of river herring unable to pass the Main Street Dam. So, armed with only a net, he perched himself on a 14-foot board and scooped 10 to 15 fish at a time, then placed them back into the river above the dam.

Though many simply shook their heads, some curious passersby stopped to help. McWha and a dozen volunteers helped about 20,000 fish over the dam during the next three weeks. Since then, helping the herring on their spawning run has become an annual event in Wakefield. Every March and April, growing numbers of volunteers join McWha as he mounts a wooden platform and nets the fish.

McWha says that he felt terrible about the herring’s plight and knew that he had to help. To him, it was “a waste that these herring weren’t going to be able to spawn.” McWha told National Geographic that he “felt an emotional connection to them, and just had to get them over the dam.”

McWha’s efforts expanded upstream in 2013, when volunteers used buckets to move fish beyond a second dam. In 2014, 75 volunteers, armed with only nets, helped an astonishing 72,000 fish navigate the Main Street Dam. Over the past year or so, however, efforts have slowed down as officials work on existing fish ladders, improving the run. McWha and his band of volunteers will be standing by to count fish and, if necessary, break out the nets and help fish over the dam.

River herring, the collective term for alewife and blueback herring, are anadromous species and must make annual pilgrimages into freshwater to spawn. The National Oceanic and Atmospheric Administration considers them a species of concern for a variety of reasons, including their restricted access to spawning habitat because of dams. Per NOAA, river herring populations have decreased as much as 95 percent in some rivers. The Gilbert Stuart run, for example, historically the largest spawning run in Rhode Island, plunged from 290,000 fish to a paltry 17,000 between 2000 and 2004.

Now, river herring in New England need McWha’s help more than ever. National Geographic reports that the New England Fishery Management Council recently voted to increase the acceptable level of river herring bycatch by 40 percent. Though NOAA can reject the proposal, it may open the door for 500,000 more herring to be accidentally harvested than it currently does.