Efforts in Yellowstone Lake to reduce the number of non-native lake trout and subsequently bolster cutthroat trout populations are succeeding.... 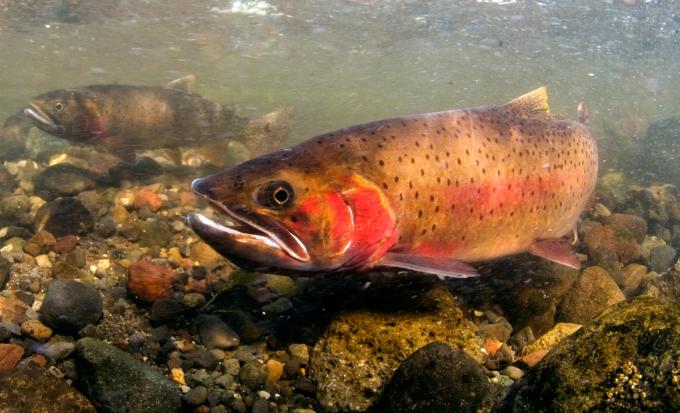 Efforts in Yellowstone Lake to reduce the number of non-native lake trout and subsequently bolster cutthroat trout populations are succeeding. According to the Cody Enterprise, the ratio between the trout species is nearing 50–50, an improvement from what was previously a 90–10 domination by the predatory lake trout. Dave Sweet, a Trout Unlimited member and Yellowstone Lake special project manager, has spent the past eight and a half years working to improve cutthroat populations. He said the new findings are encouraging but also noted that there is still much to be done in reviving the native cutthroats.

Lake trout are a unique threat to Yellowstone cutthroat, which are a key food source for roughly 20 area wildlife species, including bears and ospreys, and they support sport fishing, which brings in $36 million annually, to boot. Because of the fish’s widespread effect on the ecosystem, Sweet said restoring the cutthroat is vitally important. “It’s called a keystone species in Yellowstone,” Sweet told the Cody Enterprise. “It really ripples through the ecosystem.”

According to the National Park Service, cutthroat trout represent about 80 percent of a lake trout’s diet; biologists estimate that mature lake trout eat about 41 cutthroats a year. Since the first Yellowstone lake trout was discovered in 1994, 1.7 million have been removed via gillnetting. Anglers remove another 20,000 each year. One goal of Yellowstone’s Native Fish Conservation Plan, instituted in 2011, is to eliminate 25 percent of the lake trout population a year until their numbers become insignificant.