Photograph via WVNRP/Facebook An anonymous tip led West Virginia Natural Resource Police to a major poaching arrest during the first... 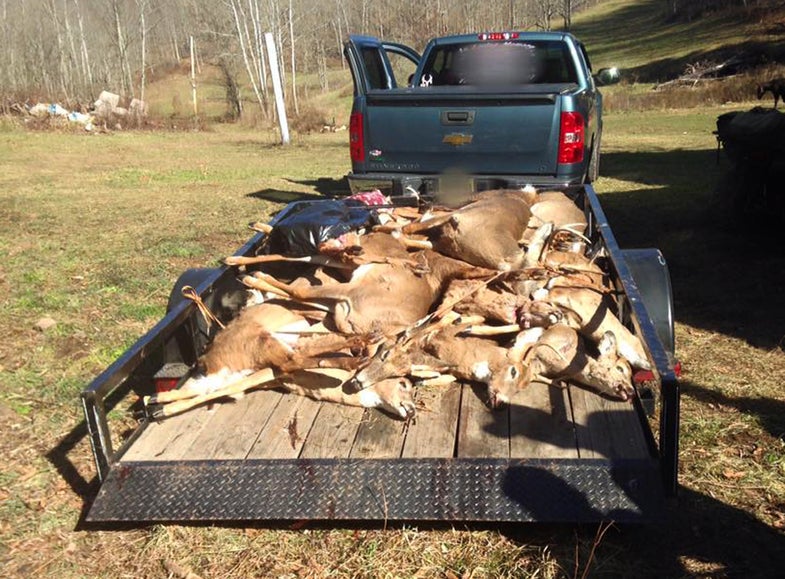 An anonymous tip led West Virginia Natural Resource Police to a major poaching arrest during the first week of buck season. According to the West Virginia Metro News, officer Andrew Lyons received a call about a potentially dubious hunting camp in the Duncan Branch-Green Sulphur Springs area of Summers County. After conducting preliminary surveillance and discovering there was truth to the tip, Lyons called in officers Josh Lambert and Isiah Tuck, and together they watched the site for another day.

The following morning, the three officers drove to the camp to look for the hunters. They found no one—but discovered a pile of 18 untagged deer. Lyons then called in more officers, who managed to arrive before the five poachers returned from the field. “Most of the individuals were from out of state and out of the group only one had a hunting license and he had already killed four deer,” Woodrow Brogan, a captain with WVNRP, told Metro News. “One of the subjects from New Jersey had killed nine deer in two days and another subject from Pennsylvania had killed six deer in two days and neither one of them had a hunting license.”

The group had been road hunting by day and spotlighting by night, officials believe. The five poachers were charged with numerous violations, including hunting without licenses, exceeding bag limits, and failing to tag and check deer. Officer Lyons soon began calling needy families in the area to offer them a share of the 18 deer. Before long, word spread, and by 10:00 p.m. that evening, all 18 deer were claimed and gone.

The five poachers were fined upwards of $10,000. “In more than 20 years, this is the worst case I’ve seen, as far as that number of individuals in such a short period of time violate game laws to that degree,” said Brogan. “These subjects were actively hunting and planning on staying until the end of the week. Luckily officers Lyons, Lambert, and Tuck put a stop to that.” According to the WVNRP’s Facebook page, illegal camps such as this are a yearly issue in the state.