Invasive lionfish in the Atlantic are no longer free of predators. PBS reports that the Harvester Lionfish Hunter is similar... 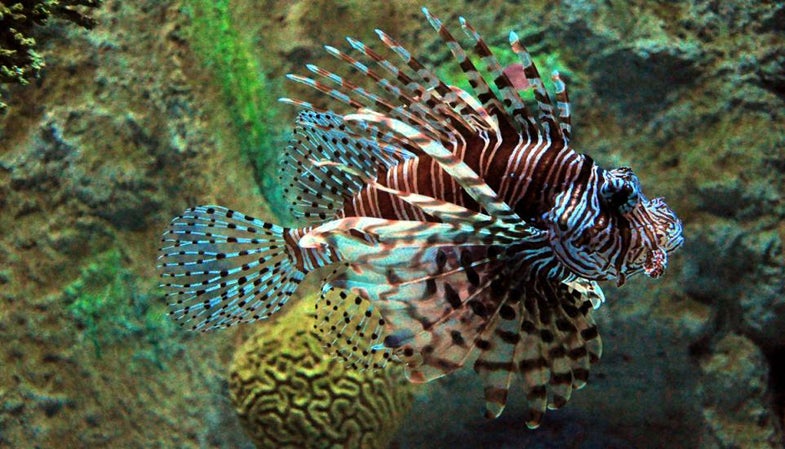 Invasive lionfish in the Atlantic are no longer free of predators. PBS reports that the Harvester Lionfish Hunter is similar to a robotic vacuum cleaner—only that it kills fish rather than sucking up dirt.

Robots in the Service of the Environment is behind the project, and it is currently working with designer Ed Williams to engineer prototypes. One leading design spears lionfish; another electrocutes them.

The challenge is getting the robots to do their job without a pilot and to kill mass numbers of lionfish in a hurry. “The problem with lionfish is it’s like Darwin’s nightmare,” Oliver Steeds, director of Nekton Mission, a deep-ocean exploration project, told PBS. “Lionfish are chowing their way through the food chain because they don’t have any predators.”

When female lionfish are not eating, they’re laying eggs. They spawn every two to three day, producing 2 million eggs annually while snacking on all the fish they can lure in to the detriment of reef ecosystems. “In U.S. waters, we know the lionfish are consuming a number of economically important [species], like snapper, grouper, and even spiny lobster,” said James Morris, a NOAA ocean ecologist.

An unmanned robot may be even useful 200 feet below the surface, which is a risky depth for humans hunting lionfish with spears.

This is not the first unorthodox attempt to kill lionfish. In May, Florida celebrated Lionfish Awareness and Removal Day, a nearly five-month competition to remove as many of the invasive fish as possible.