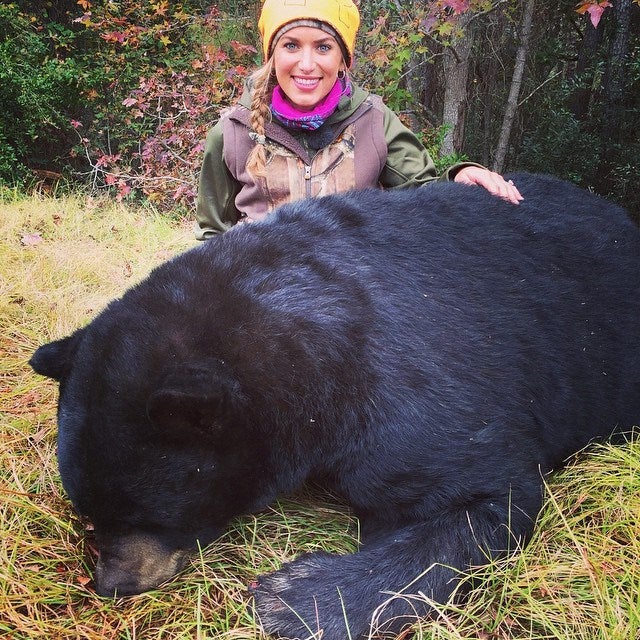 Last week Eva Shockey shot a monster 510-pound black bear while filming with her dad for Jim Shockey’s Hunting Adventures. The Shockeys patterned bears as they traveled from crop fields to bedding areas, and on the fifth day Eva killed her best bear ever from a makeshift ground blind.

When she posted a photo from her hunt on her Facebook, the post blew up with hateful anti-hunting comments and death threats. Not one to back down, Eva did interviews with The Blaze, Fox News, and Field & Stream to respond to the backlash.

“I knew it was going to be this way going into it,” she told us. “My dad warned me before I even got involved with the show that I was going to have to deal with anti-hunters. I’m a huge target for them because I’m a smiley young woman, and I’m different than who they’re used to dealing with.”

She tries not to take the comments personally and doesn’t share the worst ones “so, other people don’t have to read them,” she said.

“The comments are pure hatred, and hatred mostly comes from fear of the unknown. These people don’t know anything about hunting. What’s sad is that they don’t know all the good things hunting does for conservation, the economy, and our culture.”

And don’t worry: The backlash isn’t going to keep Eva from posting about her adventures on social media.

“If I can affect a few people in a positive way and get more girls interested in hunting through Facebook or Twitter, then it’s worth it. I’ll take the bad with the good.”

The Shockeys donated their bear meat to the guides and their families and are getting full-body mounts for a natural history museum that Jim is working on. They were hunting with Cross Trail Outfitters after working with the group to fund raise for a youth hunting program.

See Eva’s interview on the future of hunting from the May issue.

Here’s a Q&A video we filmed with Eva during SHOT Show last year.