Photograph: AquaBounty Technologies Earlier this month, the U.S. Food and Drug Administration (FDA) made waves by approving the production of... 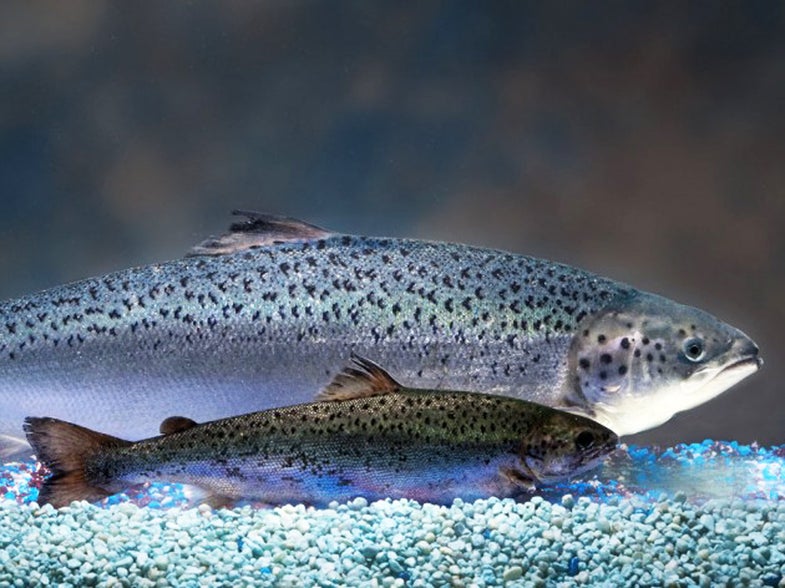 Earlier this month, the U.S. Food and Drug Administration (FDA) made waves by approving the production of genetically modified salmon as a “drug” and declaring it safe for human consumption—a decision that has some worried the agency is setting a dangerous precendent.

A press release issued this month by the FDA stated that because the fish “reaches market-size more quickly than non-genetically engineered farm-raised Atlantic salmon,” the agency has the authority to regulate it as a drug under provisions of the Federal Food, Drug, and Cosmetic Act, “because the recombinant DNA (rDNA) construct introduced into the animal meets the definition of a drug.”

ABC News reports that the genetically engineered salmon—coined “AquaAdvantage salmon” by its development company, AquaBounty—grows faster than normal because of an artificially inserted growth hormone—one that includes genes from Chinook salmon and genetics from an ocean pout (an eel-like fish).

The FDA claims it found “no biologically relevant differences in the nutritional profile of AquaAdvantage salmon compared to that of other farm-raised Atlantic salmon.” Likewise, AquaBounty claims that the modified salmon require 25-percent less food than normal fish do, and have a smaller carbon footprint. Opponents, however, are concerned that modified fish pose a risk to the environment and to human health. The FDA did not disclose what, if any, negative effects the fish might have on consumers, and, interestingly enough, there are currently no regulations in place governing that engineered salmon must be labeled differently than wild or farmed fish. So, you may not know whether the salmon you purchase is genetically modified or not if the current regulations remain in place.

Wenonah Hauter of Food and Water Watch said, “the FDA has based its assessment of this totally unnecessary technology on blind trust.” In fact, on the heels of the FDA’s announcement, the Center for Food and Safety (CFS) filed a lawsuit against the FDA, citing that the fish are a “dangerous contaminant” for disease, and that the FDA ignored the advice and recommendations of more than 300 environmental, consumer, salmon, fishing groups, and food organizations—plus two million comments (the most the FDA has ever received regarding an action) from individuals opposing the approval of modified salmon. Also, the CFS reiterated the danger of raising genetically modified salmon near wild, native fish populations, and noted that AquaBounty is currently raising fish in Panama, but failing to follow environmental regulations. In 2014, the company received a $9,500 fine after an accidental disease outbreak resulted in “lost” salmon.

As Grub Street points out, since news of the AquaAdvantage salmon’s approval first broke, a host of major food retailers—including Costco (the largest seller of salmon in the U.S.), Kroger, Target, Trader Joe’s, Safeway, and Whole Foods, among others—have announced that they will not carry the modified salmon. This is largely because nearly 60 percent of Americans believe that genetically modified food is unsafe, according to the Pew Research Center. (In contrast, 88 percent of members of the American Association for the Advancement of Science believe modified food is safe to consume.) So, for these big retailers, carrying the AquaAdvantage salmon may just be bad business.