Four shark fishermen caught something big last Saturday, but it wasn’t a fish. As the group returned, they came upon... 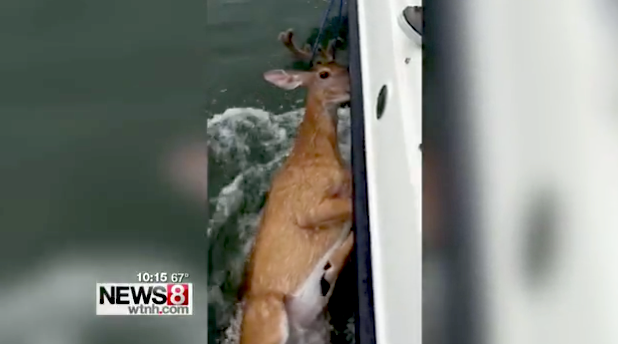 Four shark fishermen caught something big last Saturday, but it wasn’t a fish. As the group returned, they came upon a buck deer swimming in the Long Island Sound around six miles offshore, according to WTNH News8. The buck, a six-pointer, wasn’t making much progress in the 58-degree water, and the fishermen worried what would happen if they didn’t give it some assistance.

“You could see it was shivering. It was barely staying afloat, kind of just going in circles,” Rod Kurdy told News 8. “[We] actually got a piece of rope and were able to stick the rope around the antlers real gently, and corral the deer towards the boat. We used one of the boat cleats to tie it to him and [made] sure he was comfortable and we weren’t pulling him too hard.”

The anglers, with the deer in tow, traveled toward land at two miles per hour. Once they got close, Kurdy put on a life jacket, jumped in the water, and brought the animal the rest of the way to shore. Neighbors brought blankets to warm up the animal, which got up and walked away on its own after about three hours.

“It’s a life,” Kurdy told News 8. “I’m not going to let him drown. He was out in the middle of nowhere, shivering and freezing, so we all said, we just can’t let it drown. It was the right thing to do.”

It isn’t uncommon for deer to swim, as the hollow hairs covering their bodies provide enough buoyancy for swimming, according to the Michigan DNR.