Georgian Angler Keith Watkins celebrated his 51st birthday in style on March 30th by going fishing on Coweta Lake with... 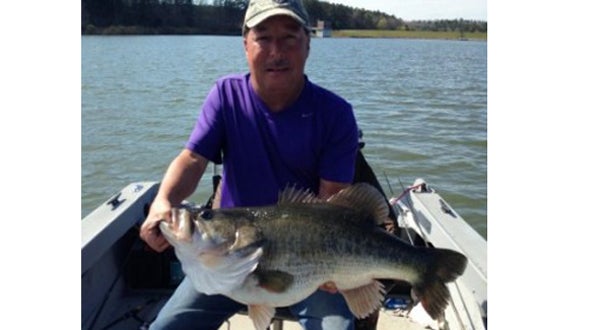 Georgian Angler Keith Watkins celebrated his 51st birthday in style on March 30th by going fishing on Coweta Lake with his friend Stanley Elrod and received the best gift an angler can receive, a record-sized largemouth bass weighing 17 pounds, 9 ounces.

A story from Georgia Outdoor News says Watkins’ fish is the heaviest largemouth caught in the Peach State since 1987 and large enough to take the number four spot on the list of the state’s all-time biggest bucketmouths.

“It took me 20 minutes to get it in the net,” said Keith. “This fish fought so hard. She went under the boat five times. I was in the front of the boat, then in the back of the boat. It was almost a dead miracle that I got her in.”

With the bass in the boat, Elrod and Keith found the closest certified scale they could find which turned out to be at a local feed-and-seed store where the owner was a witness to the weighing.

“I figured any second my line was going to pop. I loosened the line so loose that you could have pulled it out with your breath. I was just trying to wear the fish out. We’d seen her several times. I played her, played her and played her and finally wore her out and got her.”